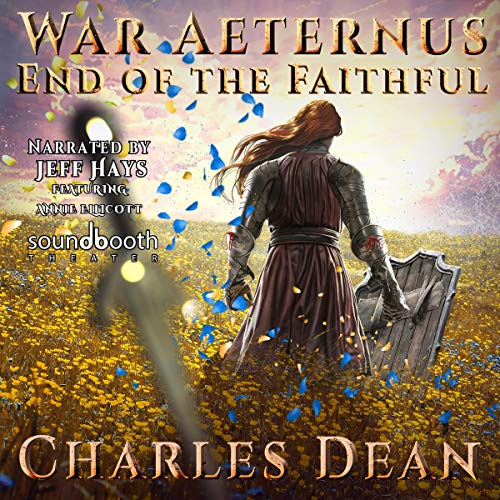 War Aeternus 5: End of the Faithful

Lee has barely established his foothold in the kingdom of Birnefeld, and yet enemy forces are already rushing to attack. Almost all of the other Heralds have been stamped out of existence by the anti-religious zealot King Ramen, and now that the ruthless rule of the empire has turned his sights toward the newly conquered realm, and started marching a massive army easily capable of crushing the entire kingdom beneath their feet straight toward Lee's doorstep. With no other choice, Lee has to turn to the nemesis who plagued his dreams, the Mistress of Shadows, for help. Now, with everything on the line, Lee has to race against the clock to gather the last remaining world stones and finally finish the gods’ cruel game and close out the final chapter of War Aeternus before King Ramen puts an end to the faithful.

This Gamelit Litrpg fantasy novel was written by Charles Dean, author of the Bathrobe Knight series, the Merchant of Tiqpa series and the Heroic Villain series as well.

All good things must come to an end

This is the ending of the War Aeternus series, and it did not disappoint. After reaching the conclusion and seeing how everything tied together, I go the sense that Charles had the entire story planned out from the beginning. More than anything else this story felt final. There were no loose ends, everything had closure.

I've come to love the characters of Lee, Jade, Ling, and Miller. IMO, these are some of the genre's most unique characters, and I feel like they've gotten the ending they deserved. Nearly every major character in this series has evolved and changed in some meaningful way. Lee is nothing like the same character who he was in the first book. Neither is Jade, or Ling. Miller has been pretty constant, but I wouldn't have expected otherwise.

It's a bit sad to know that I'll never be able to return to the kingdom of Spicy Chicken Noodle Surprise, never see Miller tear out a man's spinal column through his eye socket and never hear Jade describe every mundane aspect of existence in terms of anime and video games. But all good things must eventually come to an end, and these characters deserved closure.

The narration was top notch. Jeff Heyes does a brilliant job as both Jade and Miller. His impressions of those two characters never failed to leave me in proverbial stitches.

If you've already come this far, do yourself a favor and listen to End of the Faithful. If you haven't started the series yet, I can wholly recommend it, particularly now that it has come to a definitive conclusion. All I can say is that you're in for an exciting ride.

It was very good. But as a lot of writers do, I felt like it was ended because he didn’t want to write it anymore. Left a lot of things unsaid.

I want to start by saying that I enjoyed this book and this series. With a few hours to go, I really thought that there had to be another book because there was so much to resolve, but it did finish. Due to that, it felt rushed at the end (not bad, just rushed).

these series was setting up to be awesome but then the last 2 books happened, I dont know why he decided to go a different direction than normal, you could tell he wanted all these important story arcs but then boom they're gone. yes the main story is finished but if you start thinking about important events throughout the books most are complete unanswered. oh well it still was decent

Why the author chose to end the story like this is beyond me. It's all crammed in together with no second thought to anything.
Really disappointed with it.

Honestly think I should have stopped at the end of the last book. The performance was great but the story was lacking. All the twists were extremely telegraphed and the ending left me wanting. The author clearly tried to solve the harem conundrum but it just ended up feeling wrong.

But that's my opinion and if you have already gotten this far in the series you should listen to this one. Every story deserves an ending and this one is solid no matter my own personal sway.

The extra star is for an ending to a saga and those few parts of the book that are a little entretaining.
The MC spends half de book crying about this and that. The author gives him grief that does not develop the story and simply slows the story more.
The saga was good turning to entretaining, ending... Concentrating only on the MC's love interests.
Weak.
This book has put me off from re-reading the saga now that all books are out.

Ending seemed rushed, not well thought out or just squeezed together. Feels like a dropped story lines.

Not sure how I feel about the ending

I won't spoil anything but, the ending tied everything up for the most part but felt a little rushed. The big endgame boss battle was a let down, sure there was the usual twist but it was still a bit meh imo. It just didn't feel right to me, I know it's rather hard to write endings that tie everything up nicely that satisfies readers, and that was far from the worst, it just fell a bit flat for me personally.

Still, worth the listen and I don't regret buying the series, just a little sad it's over and left me a little sad for the MC.

ending maxe me both happy and sad

I love these books, they are amazing and I was so excited about this one. an amazing story to the end, which was amazing, both wonderful and sad at the same time

It was fun and sad at the Same time.
Although it felt a Little Bit rushed. And without much Details of the casts appearances. It could have taken another Book or two before the end.

Truly a sad ending for a pretty okay series

Let me start of by saying that Jeff Hays always does an excellent job narrating, but even he cannot save this trashheap of a book. Compared to previous entries, this finale is not just extremely poorly written, its not even a little fun. At least the other books were slightly comedic here and there and showed some potential. This is just bad.
Dont buy this book.

but now that its over
what the fuck was up with jeff hays's fake texan accent? he doesnt have it in any other audiobook.