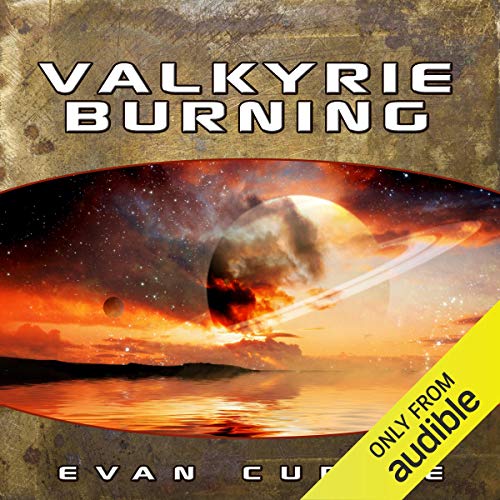 The war that began on Hayden's World years ago has blossomed into a brawl across the stars, and yet that single and otherwise largely unimportant colony continues to be a central point in the conflagration. Human forces have pushed outward, now taking enemy worlds in response to the attacks on their own, but they don't have the numbers or the power to hold what they take. Now the alien Alliance shows a sliver of its true power, and the war for domination of the skies over Hayden burns brightly once more. Neither side has any intentions of giving up the game, and both sides have plenty more aces held back against a rainy day. A fiery rain is coming, and when it passes, the future of the entire Orion-Cygnus Arm of our Galaxy will be decided. Admiral Nadine Brooke, Captain Jane MacKay, and Sergeant Sorilla Aida intend to make certain it's decided in humanity's favor.

Valkyrie Burning is book three of the Hayden War Cycle. Books one and two are On Silver Wings and Valkyrie Rising; both are available on Amazon under Evan Currie's author page. The final novel of the Cycle, book four - The Valhalla Call - is now available on Amazon Kindle.

Earth is finally taking this seriously

Valkyrie Burning is the 3rd installment of Evan Currie's Silver Wings series. Valkyrie has been sent behind enemy lines to probe defenses, scout for clues pointing toward the alien home worlds, and recover captured Earth soldiers. After returning to Earth controlled space at Hayden's World and before even getting a chance to catch their breathe, a new alien species coming barreling in to retake the planet. The action takes both in space as well as on the ground, mainly by Sargent Aida who remains the only human to take out Lucian sentinels.

The sci-fi elements are largely in line with the 1st two books, but there is further exploration of the Alliance members with a whole new species handling the space faring military. As with book 2 where part of the story was told from the perspective of the alien ground soldier, book 3 adds to that the perspective of the alien equivalent of a space admiral. In addition, Currie drops some clues regarding the lack of any type of communication as the alien species don't appear to utilize the EM spectrum. The Alliance is shaping up to be a collection of specialized, almost insect-like species that don't necessarily like each other, but interact out of mutual benefit. Hayden's World appears to be located in a region of space sparse for jump points and is the chokepoint for moving between the main body of the galaxy where the Alliance is concentrated and Earth which is farther out. The unique appeal of the planet itself remains to be revealed. Interestingly, humans continue to be viewed as weak technologically relative to the Alliance, but their jack-of-all-trades quality seems to always surprise and impress their adversaries.

The narration continues to excel with an excellent range of voices, good character distinction, and unique alien voices without sounding animalistic. This is a great series that continues to get better with each installment.

Agree the ending was a bit abrupt.

Seems they had a book done and instead cut it in half to increase earnings or something. Good action and fast paced, but I don't consider books under 12 hours in length a good value.

I keep listening despite writing issues

The story is engaging enough that I still put up with info dumps and repetitions of explanations on the level of Kevin J. Anderson. Currie has great material and it would be fantastic if he could work on his writing technique. Yet here I am buying the last two books of the series.

Reader is a bit stilted. Not bad but could improve

Reader ended each sentence in the narrative part with the same slightly descending tone - as if she had a hard time having enough breath to finish the sentence.

Women should not be green Berets

Because they are dsngrrous enoud enough already. I like it.

A couple of minor editing omissions on a very exciting and imaginative novel.

Great continuation of the story

A good third installment. The author had added some crazy ideas that move the story along well.

But the swearing is getting out of hand.

The author continues to humanize Sgt. Aida which makes her an even more interesting character and her battle engagements are still thrilling. Even the space fleet commanders and their story arcs are better developed; although, I still find myself wanting to get past those sections so as to see what non-conventional things Aida is up to next. She's really is the disruptive protagonist in the story.