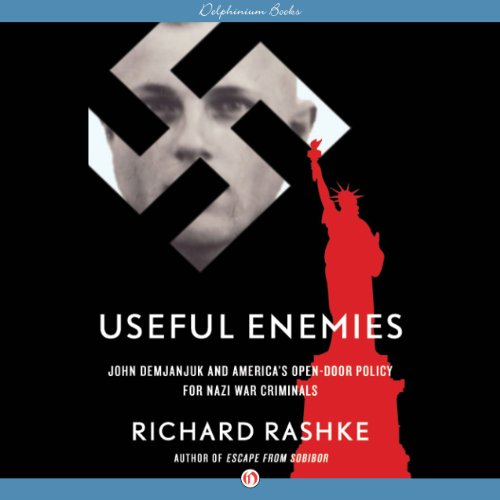 John “Iwan” Demjanjuk was at the center of one of history’s most complex war crimes trials. But why did it take almost sixty years for the United States to bring him to justice as a Nazi collaborator?

The answer lies in the annals of the Cold War, when fear and paranoia drove American politicians and the U.S. military to recruit “useful” Nazi war criminals to work for the United States in Europe as spies and saboteurs, and to slip them into America through loopholes in U.S. immigration policy. During and after the war, that same immigration policy was used to prevent thousands of Jewish refugees from reaching the shores of America.

The long and twisted saga of John Demjanjuk, a postwar immigrant and auto mechanic living a quiet life in Cleveland until 1977, is the final piece in the puzzle of American government deceit. The White House, the Departments of War and State, the FBI, and the CIA supported policies that harbored Nazi war criminals and actively worked to hide and shelter them from those who dared to investigate and deport them.

The heroes in this story are men and women such as Congresswoman Elizabeth Holtzman and Justice Department prosecutor Eli Rosenbaum, who worked for decades to hold hearings, find and investigate alleged Nazi war criminals, and successfully prosecute them for visa fraud. But it was not until the conviction of John Demjanjuk in Munich in 2011 as an SS camp guard serving at the Sobibor death camp that this story of deceit can be told for what it is: a shameful chapter in American history.

Riveting and deeply researched, Useful Enemies is the account of one man’s criminal past and its devastating consequences, and the story of how America sacrificed its moral authority in the wake of history’s darkest moment.

What disappointed you about Useful Enemies?

This narrator sounds like he's reading a news article in a monotonous drone with little inflection to make that material sound interesting. He has a staccato cadence with weird exaggerated pauses within sentences, but then his pauses are too short between sentences. It's excruciating to listen to and I have to wonder why anyone would choose him to narrate a book.

I find the book's subject quite interesting, albeit disturbing, but I had to READ the Kindle version instead of listening to the Audible version because I just couldn't stand the narrator.

By all means read this fascinating, thorough history. But under NO circumstance punish your self or risk your sanity listening to this travesty. The narrator butchers the pronunciation of Russian, German, AND English language words. Worse still, bless him, this poor fellow has no noticeable comprehension of what he is reading. He is ignorant of inflection. And babbles word groupings without regard for function or common sense.

if you want to know how

people who stomp on chidrens faces, push people into ovens, and shoot people lined up in trenches?
Read this
And watch the Netflix Feature now out
Compare this to the current immigration policies
and look up the SS St Louis on your own
Its happened before, and it will happen again Somewhere
Unless we keep a close vigil

The story told is beyond shocking on the one hand and hardly surprising on the other. It is reading for anyone interested in another component in the complex story of WWII and war in general, especially its aftermath and as a prologue for the next war.