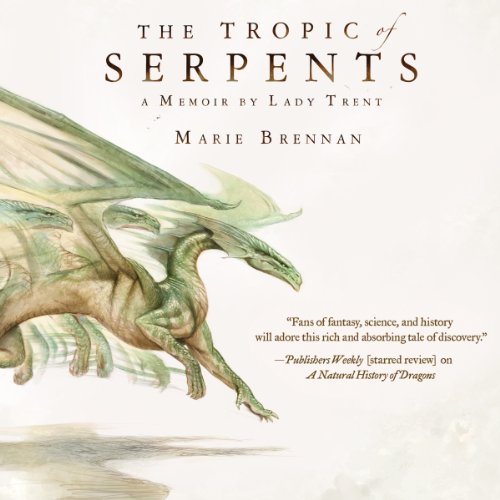 The thrilling adventure of Lady Trent continues in Marie Brennan's The Tropic of Serpents.…

Attentive listeners of Lady Trent’s earlier memoir, A Natural History of Dragons, are already familiar with how a bookish and determined young woman named Isabella first set out on the historic course that would one day lead her to becoming the world’s premier dragon naturalist. Now, in this remarkably candid second volume, Lady Trent looks back at the next stage of her illustrious (and occasionally scandalous) career.

Three years after her fateful journeys through the forbidding mountains of Vystrana, Mrs. Camherst defies family and convention to embark on an expedition to the war-torn continent of Eriga, home of such exotic draconian species as the grass-dwelling snakes of the savannah, arboreal tree snakes, and, most elusive of all, the legendary swamp wyrms of the tropics.

The expedition is not an easy one. Accompanied by both an old associate and a runaway heiress, Isabella must brave oppressive heat, merciless fevers, palace intrigues, gossip, and other hazards in order to satisfy her boundless fascination with all things draconian, even if it means venturing deep into the forbidden jungle known as the Green Hell…where her courage, resourcefulness, and scientific curiosity will be tested as never before.

The author's excellent writing and the narrator's perfect characterization combine to create the experience of listening to the adventures of a dragon-mad lady naturalist in person. The story blends dragons and realism so deftly. If you like: memoirs by intelligent, witty characters, turn of the century adventure stories, or the idea of dragons as an integral part of the natural world, give this series a try.

Another great addition to this series!

This is the second book in the Memoirs of Lady Trent series. I really enjoyed all the adventure in this book and loved exploring the alternate world that Lady Trent lives in. I listened to this on audiobook and Kate Reading does an amazing job narrating the story. I would definitely recommend listening to on audiobook if you enjoy audiobooks. Aside from all the wonderful adventures; Lady Trent grows a lot as a naturalist and starts actually making herself a name in this book. I enjoy her character and how dedicated she is to her science. In this novel she is also working on some personal issues and struggling with how to act and engage as a mother to her young son. Additionally, I really enjoyed learning about some new species of dragons; each book has introduced a new species and built on information from the previous books. Overall this was another fun fantasy adventure read set in a Victorian-like time period. I have been enjoying this series a lot and plan on continuing it.

Fictional science at best with even more feminism

If you have any interest in science and in dragons, this is meant for you. Or at least, I felt it was nade for me, and I am almost finishing a PhD. This volume is centered around an expedition to a tropical country/colony and the study of the dragons therein. As before, little by little we learn about these dragons. And the continuity from book I is pretty nice. Supposing you read it, this book is when she lost the knife she mentioned losing in swamps in the previous book. Also, the value placed on gender gap issues certainly makes a plus for it. Very worth it!

A romp in make believe world you believe there was

I loved the first book in this series, "A Natural History of Dragons". I love this one perhaps even more. Set in a world similar to Victorian England but not quite with Dragons and manners. What fun with the irrepressible Lady Trent leading the way into the modern age.

What made the experience of listening to Tropic of Serpents the most enjoyable?

Excellent narration, is really what it comes down to. Kate Reading's voice acting was fantastic and gave each character a voice and life of it's own.

As a history buff the touches of the Victorian in the book made me chuckle quite a few times as 'Victorian Modesty' ran smack into the practical side of jungle adventuring.

Dull. Not nearly as interesting as the first book. Very tiresome listening to her whine.

I was disappointed how similar this book was to the first one. I don't plan on getting any more of them for fear they all just rehash the same formula. Also, maybe this was a thing in the first book too and I simply didn't notice or forgot: many times in this book the author uses "myself" when the correct word would have been "me" or "I.". I found it very distracting. This isn't some poorly educated American cop's testimony, after all.

A great expansion to the first book with a stronger beginning and end. Looking forward to reading number 3!

LOVE this series!! Smart, funny and Dragons from a naturalists perspective. Well read and worth the credit.