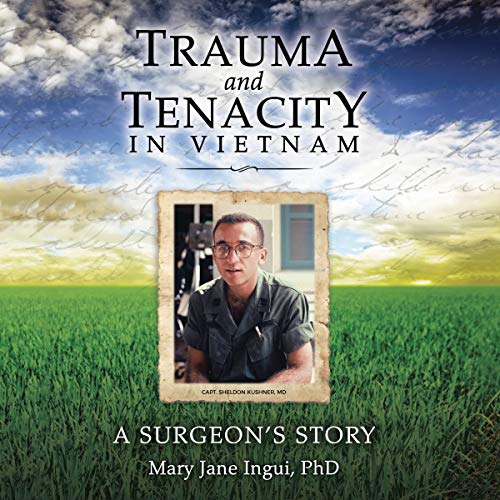 Trauma and Tenacity in Vietnam

Trauma and Tenacity in Vietnam: A Surgeon's Story captures the defining period in the medical life of Capt. Sheldon Kushner, MD, while stationed in Vinh Long, Vietnam, from 1968-69. Through letters, reel-to-reel tape recordings, slides, and the personal interviews that recounted his experience, the story of a young surgeon is revealed.

When we think of Vietnam and medicine, there is a natural tendency to think of the M*A*S*H image of treating American soldiers wounded in combat. However, unlike the TV doctors who helped our servicemen, Sheldon used his medical skills to care for wounded Vietnamese civilians. This role represents a new part of the story that is Vietnam. It was an effort by our government to improve the health conditions and showcase America's compassion and good intentions to win the hearts and minds of the South Vietnamese people. The great hope was that the South Vietnamese would embrace these medical practices and continue them, just as our military believed that as we advised the South Vietnamese, they would gain the ability and motivation to defeat the North Vietnamese. This lofty goal of medical mentorship was never achieved, but the men and women who went to do the job came away changed and wholly committed to the idea that they made a difference.

When we listen to this book about other people's lives, we feel their triumphs and tragedies; we vicariously experience the lessons life taught them. In Vietnam, Sheldon learned that he was a survivor, a man whose love of medicine was broadened to explore the inner sense of pride in his work. He discovered he had the tenacity to meet the challenge of unrelenting daily surgery and that under less-than-optimal conditions, he and his team could use creativity to accomplish their goal of keeping people alive. His ethics were left intact in spite of what he saw around him. Most of the letters and tapes utilized in the creation of this book reflect the emotions of an inexperienced 26-year old physician, overwhelmed and unprepared for the horrors of a brutal war that he did not understand. The scars remain imprinted in the minds of many veterans who returned home alive, only to be met by the insensitivity, contempt, and hatred conveyed by some people who did not serve in Vietnam and did not understand.

In this book, you will hear the profound effect Sheldon's service in Vinh Long had on him physically and mentally. It also shaped his opinion on the war. It was truly the defining period of his life. As Sheldon concluded about his time in Vietnam: "We did a lot of surgery and saved a lot of people's lives. We filled a great humanitarian need."