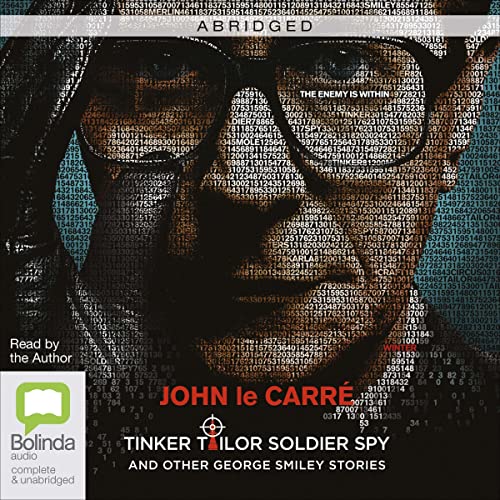 Call for the Dead (Abridged): George Smiley had liked the man and now the man was dead. But why? Fennan was dead with a note by his body saying his career was finished and he couldn’t go on. Smiley decides to investigate—only to uncover a murderous conspiracy with its roots in his own secret wartime past.

A Murder of Quality (Abridged): Miss Ailsa Brimley is in a quandary. She's received a peculiar letter from Mrs Stella Rode, saying that she fears her husband is trying to kill her. Reluctant to go to the police, Miss Brimley calls upon her old wartime colleague, George Smiley. Unfortunately, it's too late. Mrs Rode has just been murdered. To discover the truth, Smiley must lift the lid on a world of hidden passions and dangerous hatreds....

The Spy Who Came in from the Cold (Abridged): In the shadow of the newly erected Berlin Wall, Alec Leamas watches as his last agent is shot dead by East German sentries. For Leamas, the head of Berlin Station, the Cold War is over. As he faces the prospect of retirement or worse—a desk job—Control offers him a unique opportunity for revenge.

Tinker Tailor Soldier Spy (Abridged): The man he knew as 'Control' is dead, and the young Turks who forced him out now run the circus. But George Smiley isn't quite ready for retirement—especially when a pretty, would-be defector surfaces with a shocking accusation: a Soviet mole has penetrated the highest level of British Intelligence.

Smiley's People (Abridged): George Smiley was summoned from his dubious retirement by two seemingly unconnected events—an old woman in Paris is promised the return of a daughter she will never see, and a handover is to take place on a steamer in Hamburg.

"John le Carré is the great master of the spy story...the constant flow of emotion lifts him above most novelists now practising." (The Financial Times)

If you have never heard John LeCarre narrate his own books, please be sure to acquire this and the accompanying compilation, as he is the perfect narrator for the perfect storyteller. In 2002 when I joined Audible, the first book I downloaded was the unabridged version of Tinker Tailor by my favorite author narrated by a wonderful narrator, Frederick Davidson. At the time I wrote to Audible and asked whether they had the LeCarre narrated version. (I may or may not have Napstered a slightly static-y mp3 of the cassette tapes.) Now, 20 years later, finally I am happy to spend a credit on this compilation.

Some narrators do a fine job of distinguishing the characters in the books they read; Le Carre embodies them. The first book, Call for the Dead, alone is worth it for his voice work.

The only downside is the Chapters don’t delineate when each of the separate books begins, so here’s a guide: Chapter 1 (Intro and start of Call for the Dead) thru Chapter 7. Chapter 8 - A Murder of Quality thru Chapter 13; Chapter 14 - The Spy Who Came in From the Cold (with a great retrospective intro) thru Chapter 21; Chapter 22 - Tinker Tailor thru Chapter 30; Chapter 31 - Smiley’s People thru Chapter 38.

If you like LeCarre and have not heard these before, I could not be more envious.