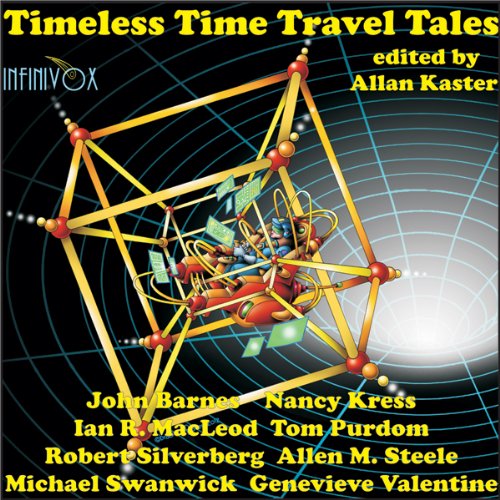 This collection of unabridged, unforgettable tales, written by some of science fiction's most esteemed authors, pays homage to one of the genre's most cherished story types. Whether time travel stories leap forward in time or slip into the past, they remain popular with fans.

John Barnes spins a tale of intrigue as the principles of science are discovered centuries ahead of time while mankind is divided into classes (Com'n and Liejt) and the Irish people are slaves in "Things Undone."

Nancy Kress masterfully alternates perspectives between Anne Boleyn and that of historians from a distant future to which pivotal historic figures are taken in order to prevent otherwise inevitable bloodshed in "And Wild for to Hold."

Ian R. MacLeod sends three time traveling historians from the future to rescue Captain Oates from the doomed Scott party amidst the race to the South Pole in the early 20th century in "Home Time."

Tom Purdom sets historians from the future on a high seas adventure to document a 19th century British Admiralty anti-slavery patrol in "The Mists of Time."

Science fiction grand master, Robert Silverberg, slowly slides the fifty-seven year old owner of a Toyota dealership in the San Francisco Bay area backwards in time towards his birth in "Against the Current."

Allen M. Steele tells the story of how a U.S. Navy blimp crewmember happens upon time travelers while monitoing Soviet sea traffic around Cuba during the Cuban Missile Crisis in "The Observation Post."

Michael Swanwick follows the director of a dinosaur research center holding a timeline-polluting fund raiser located in the late Cretaceous period in the Hugo award winning story, "Scherzo with Tyrannosaur."

Genevieve Valentine observes the detrimental effects of time travel on the timeline through the eyes of a seamtress whose wealthy patrons are obsessed with their time period costumes in "Bespoke."

This is really the worst collection of time travel (or for that matter science fiction!) stories I've ever read or listened to. Droning, pointless, and uninteresting - what could be worse.

What would have made Timeless Time Travel Tales better?

STORIES DIFFICULT TO FOLLOW. TOO MUCH NOISE IN RECORDINGS.COULD'NT STAND LISTENING TOO LONG. VERY ANNOYING.

Would you ever listen to anything by the authors again?

Fun and highly listenable anthology stories on time travel and nicely narrated by different readers. I love speculation about time travel and such and hence enjoyed these multiple takes on time travel. I listened to these stories with my wife since they make for good entertainment and none of the stories were too long. The stories sometimes seemed to end abruptly and it would take my wife to explain to me what just happened since I usually read mostly non-fiction science type stories and need non-reality to be explained to me. Enjoy and be prepared to re-listen to the last 30 seconds of some stories or have your spouse explain them to you!

BTW, the stories seemed to have gotten progressively better as you listen, and I would recommend listening to the end since the last 3 or so stories were the best stories.