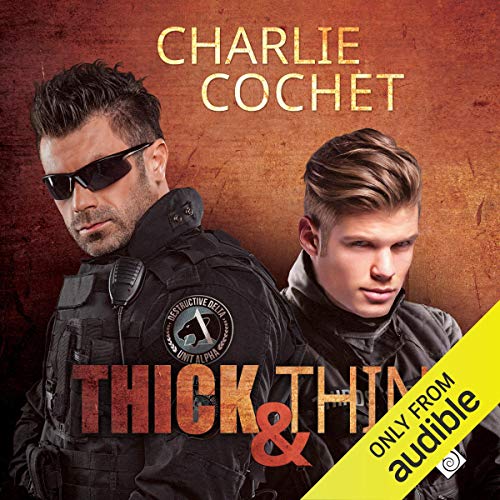 In a matter of days, Dex has been kidnapped, tortured, killed, revived, become half Therian, offered the chance to become a spy, and accepted a proposal to marry his jaguar Therian boyfriend, Sloane Brodie. It's been a lot to take in, and although Dex is still trying to wrap his head around everything that's happened, he knows he has to move forward.

After the events of Smoke & Mirrors, Dex and Sloane find themselves in one of the most frightening situations of all: revealing the truth to their Destructive Delta family. When the dust settles, nothing will ever be the same, and it's up to Dex to prove that in the face of change, the one thing that will always remain the same is family.

I love the story. Have all except the last one and became addicted to listening instead of reading while I work. Unfortunately the price all of the sudden tripled. What the heck people. I also miss being able to by the kindle book and the audible together and have them synced. What am I missing here.

Still a nice bridge in the story. I’m still sad it was so short, felt a bit like filler but dang... at this point I love these characters enough that I’ll take whatever I can get!

good, but on the short side

As usual, this is another good book in the series. My only real complaint is that at just over 3 hours, it's more of a wrapup to book 7 and should have been numbered 7.5 instead of 8.

This series just keeps getting better.

I love Mark Westfield’s narration for this series! I have yet to be disappointed by his narration of one of the THIRDS books. It’s got great character voices and good pacing…I just pop in my ear buds and then sit back, relax, and enjoy.

**~~**
“I know we’re the ones pushing this change, but we’re in this together. We always have been, and we always will be. Whatever happens, whatever you need, Sloane and I will be there for you.”
**~~**

This series just keeps getting better. I had quite a few questions at the end of Smoke & Mirrors, particularly regarding Dex’s motives and was really happy they are looked at more in depth in this short, but action packed, installment.

It’s a short novella, but it’s got a lot packed in it, and it’s all done with cohesion, setting up the series for what’s still to come.

**~~**
Their future might be uncertain, but one thing wasn’t— no matter what happened or what they faced, they had a family to come back to, one that grew stronger with every passing day. Destructive Delta wasn’t just a team. It wasn’t a badge or a patch on their sleeve. It was home.
**~~**

I look forward to more THIRDS action – especially on audio!

Note: For the sticklers be warned – Westfield doesn’t give Hudson an English accent for some reason and his voice for Cael seemed different to me than in the rest of the series. He also has audible intakes of breath before speaking – often.

Love This Series So Much

This just keeps getting better and better, I really did sleep on this series to long. We get to see the new and improved Dex in action, and it is amazing. Dex and Sloane are just perfect together, and their relationship just gets stronger with each book. And the team has some heart to heart moments, I love these guys so much, I vote for a movie franchise!!!!

This is another one of my favorite series. I’ve read the books several times and listened to almost all of the audiobooks. I’m sure I will listen to them more than once too. I love Sloane and Dex!

Honestly, it’s the characterization of Dex, Sloane and the rest of the team that makes me love these books so much. Without their amazing personalities, and Charlies fabulous writing skills, I would not be as invested in this series as I am. The plot keeps getting more crazy and complicated, and I keep having to expand my suspension of disbelief. But I love the team and I love the characters, so I’ll keep suspending my disbelief.

As usual trouble is following Dex around, and this book is all about making plans and mopping up the mess.

Dexter is the hot Gay cop

great series love the cheesy romance story is not here. The agents sound like the men you wish you could marry.

This has all the same qualities I love in the other THIRDS books but was really just a short transitionary story.