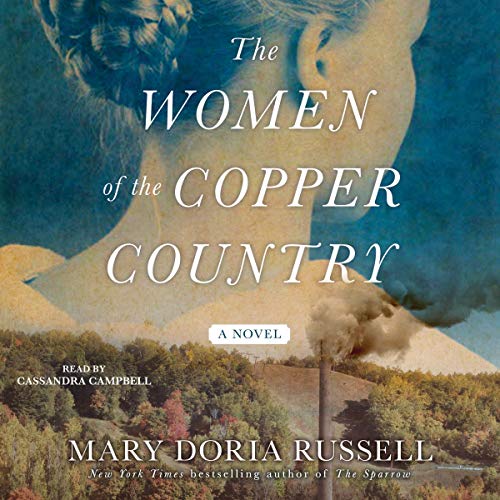 The Women of the Copper Country

The Women of the Copper Country

From the best-selling and award-winning author of The Sparrow comes an inspiring historical novel about "America’s Joan of Arc" Annie Clements - the courageous woman who started a rebellion by leading a strike against the largest copper-mining company in the world.

In July 1913, 25-year-old Annie Clements had seen enough of the world to know that it was unfair. She’s spent her whole life in the copper-mining town of Calumet, Michigan, where men risk their lives for meager salaries - and had barely enough to put food on the table and clothes on their backs. The women labor in the houses of the elite and send their husbands and sons deep underground each day, dreading the fateful call of the company man telling them their loved ones aren’t coming home. When Annie decides to stand up for herself and the entire town of Calumet, nearly everyone believes she may have taken on more than she is prepared to handle.

In Annie’s hands lie the miners’ fortunes and their health, her husband’s wrath over her growing independence, and her own reputation as she faces the threat of prison and discovers a forbidden love. On her fierce quest for justice, Annie will discover just how much she is willing to sacrifice for her own independence and the families of Calumet.

From one of the most versatile writers in contemporary fiction, this novel is an authentic and moving historical portrait of the lives of the men and women of the early 20th-century labor movement and of a turbulent, violent political landscape that may feel startlingly relevant to today.

Maybe the reader should have visited Michigan

My ears! The constant mispronunciation of “Houghton,” “pasties,” and “Mackinac” is making me grimace. The story is compelling, but the reader and the producers really should have familiarized themselves with the regional lingo. The errors mar the performance.

Great, but frustrating if you're a Michigander!

Living here in the U.P., I was delighted to see a historical fiction novel based around the real life events surrounding the Copper Country mining era. The story centers around Big Annie, head of the Women's Auxiliary who rallies the women of Calumet along with their husbands to strike against the big and wealthy Calumet and Hecla Mining Company due to deplorable working conditions. The author does a fantastic job of describing the people, setting, and events that surround the strike and attempts to unionize the mine workers. I listened to this book nearly straight through, and despite the gripping story, well-written plot, and engaging characters, I can't find it in my heart to give this more than three stars. I can't fathom why no one (i.e. the author) wouldn't proof the audio version before publishing it. Not that Campbell would know, but she's totally mispronouncing very important words. From the very first opening paragraph, "Houghton" is completely mispronounced. That might be overlooked, but it's nearly a sin here in U.P. to mispronounce "pasty," as Ms. Campbell does repeatedly. It was like nails on a chalkboard. It's not so distracting that one can't enjoy the story, so I definitely recommend it. But the lack of attention to these critical local, iconic words is disappointing and takes away from the authenticity of the tale. If you're a Yooper and hearing "pasties" pronounced wrong drives you absolutely bananas, I recommend you read the Kindle version, eh?

How did the mispronouncing slip through?

As someone who lives in Michigan and absolutely loves Calumet this book was a great story! However “pasties” and “Houghton” are 100% mispronounced. It made me cringe and grit my teeth at each mention. How did this mistake go unnoticed? It needs to be re-recorded.

Mispronunciations need to be fixed

Though the story is compelling and an important part of history, it was difficult to listen to. Like others, I was surprised at the mispronunciations of some frequently repeated words in the book. It was distracting from being able to enjoy the story. Someone should have caught this before it was released. I ended up buying the print version so I wouldn’t have to listen to it anymore.

I'm so glad I didn't listen to the reviews that were overly critical of the narrator mispronouncing Houghton and Pasty. Certainly, she could have done some homework, but I found the story riveting from beginning to end. The author did a great job of capturing the history of this time and place, developing the characters, and creating an engaging story. My family originally settled in the Houghton area when they came from Italy and I was happy to read about some of the challenges they faced as immigrants. The story speaks to early struggles of the labor movement and courageous the courageous people who paved the way to a better life for many Americans in the 20th century.

Another winner from Mary Doria Russell

The narrator pronounces Houghton as How-ton. I couldn't listen to the slandering of the names. In my opinion, some basic study of the pronunciation of names should be done before narrating a book.

I did not listen to the book after that. I will buy the hard copy.

Thank you to the author for bringing this forgotten bit of history back into our social consciousness. History is destined to repeat itself over and over and so little changes – so little seems to improve. It is a story of determination and strength on the part of so many immigrants who wanted nothing more than to better their lives. It is a story of the twisted, corrupt nature of many of the rich and powerful and the tactics they employ to keep that power. It is a story that reminds us of how hard-working immigrant families are and their contribution to this great country. And it is the forgotten story of the critical role that women played in supporting their families and this country. You will not soon forget this story.

I listened to the audio version and it was like fingernails on a blackboard hearing the mispronunciation of Houghton and pasty. Michigan Technological University was referred to as Michigan Technical University. Story was very enlightening and educational!

This was a very good historical novel that really lays out in bare detail the struggles of immigrants in the late 19th early 20th century. Stark contrast between workers and owners. Lots if twists and a few extremely heartbreaking parts. It was an eye opening listen!