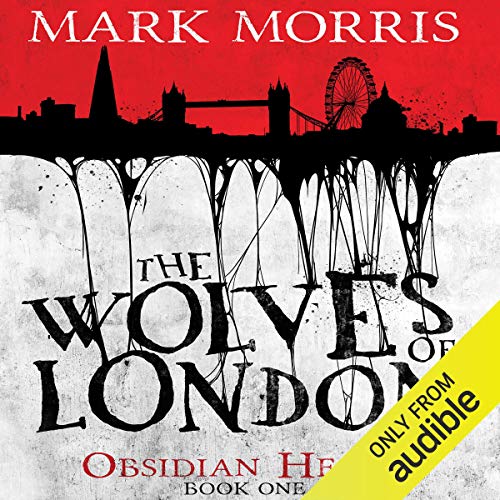 The Wolves of London

Alex Locke is a reformed ex-con forced into London's criminal underworld for one more job.

He agrees to steal a priceless artefact - a human heart carved from the blackest obsidian - but when the burglary goes horribly wrong, Alex is plunged into the nightmarish world of the Wolves of London, unearthly assassins who will stop at nothing to reclaim the heart.

As he races to unlock the secrets of the mysterious object, Alex must learn to wield its dark power - or be destroyed by it.

Nothing here is what it seems!

When I read the description for The Wolves of London, I thought it sounded like a good urban fantasy. It was that, but it was so much more!

Alex Locke is a mild-mannered fellow with a couple of ex-girlfriends and a couple of daughters. Each day is much like the others for this single dad, as he gets his youngest ready for school and arranges child care with the neighbors before he commutes to his job as a teacher. Nobody knows about his criminal past--until the day his oldest daughter reveals that she's in a jam. Alex is forced to call in a favor. And that's when the real trouble begins.

A lot of urban fantasy focuses on underground supernatural factions as they battle for control over territory or lives, and often there's some romance thrown in as well. That's what I was expecting, and The Wolves of London seemed to be going in that direction--but then it took a left turn. And then another, and another, until I had zero idea where this story was going next. It was a fresh new take on the genre, and wholly unpredictable!

I definitely appreciated Morris's imagination, but even better are the great characters in this book. So here's a warning--this is only Book One, and there's definitely more to the story. I just finished listening, and already I miss Alex as well as the other people from this realistic world that's also a very unrealistic world (in a good way!). Describing them would spoil too much--let's just say that everybody you'll meet here is full of surprises!

No review for this audiobook is complete without a mention of Ben Onwukwe, the narrator. His voice is just gorgeous, but his range of accents and voices is plain incredible. His reading creates characterization that adds both depth and humor to the weird, weird world of the story.

So if you're looking for something a little different in the urban fantasy line, I highly recommend The Wolves of London. But hold on to your headphones--you're in for a crazy ride.

What disappointed you about The Wolves of London?

The characters were great, well detailed and believable. The situation was gripping and creepy. The mystery was solid.... and then there was time-travel. It felt like the author was trying to fit every cool idea he ever had into one book.... or possibly wrote the 3rd act in a haze of alcohol-ridden frustration for having not yet completed his book. It just spiraled worse and worse at the beginning of the third act, the moment TIME-TRAVEL was thrown into this modern, crime, horror, mystery, supernatural/steampunk-esque thriller...

Would you ever listen to anything by Mark Morris again?

His characters were distinct. He LIVED the author's descriptions of each and he pulled you into the story with his performance rather than simply reading words on a page.

The first 2 acts were solid, creepy and mysterious. Despite any failings in pacing and lack of exposition, it moved well enough to keep me interested in what happened next.

....I committed 10 hours into this and then got disappointed. I gave it another hour leaving me about 2 left.... but i just couldn't finish it cuz it kept spiraling worse and worse.

Creative tale and first installment the 'Wolves' story world of the dark-fantastic. Reminiscent of Clive Barker fiction without the sexual overtones. I enjoyed the story and the narration performance was good, though often a bit dry and melancholy. Not terribly distracting, but the baritone delivery is somewhat demanding and requires the right 'mood' for long listen times.

For me this book was somewhere between science fiction and a mystery thriller but I could never quite figure out which one it was trying to be. I struggled to get through it, and became easily distracted while listening to it, particularly toward the end. The narration is fine - the story line just didn't hold my interest. I don't plan to read the next book in the series and I think that's pretty telling.

Would you consider the audio edition of The Wolves of London to be better than the print version?

I don't have it in print version, but I do enjoy the narrator's voice quite a bit to set the tone especially his voice acting for more bass heavy voiced characters.

The way it started, I was contemplating how it would turn out to be a horror story.

Which character – as performed by Ben Onwukwe – was your favorite?

I really look forward to the second book! I hadn't realized this was going to be a series and now that I know I'm very eager for the next book.

The Wolves of London is truly a hidden gem. Some might say it starts off slow, but it builds pace quickly and it stays interesting throughout. There are many twists and turns and the story is imaginative and the world goes from mundane to horrifying rather quickly. The characters are intriguing and well flushed out. This book if without a doubt worth your credit. I am eager to read the next book in the series.