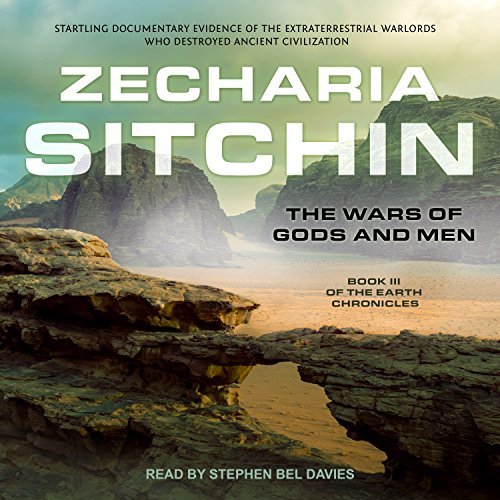 The Wars of Gods and Men

Thousands of years ago, the Earth was a battlefield. These were the wars that would shape man's destiny - terrible conflicts that began lifetimes earlier on another planet. Parting the mists of time and myth, the internationally renowned scholar Zecharia Sitchin takes us back in this volume to the violent beginnings of the human story, when gods - not men - ruled the Earth. In a spellbinding reconstruction of epic events preserved in legends and ancient writings, he traces the conflicts that began on another world, continued on Earth, and culminated in the use of nuclear weapons - an event recorded in the Bible as the upheaval of Sodom and Gomorrah.

This is a great reading of the third book in the Earth Chronicles series. The narrator is great, with a clear voice and good tempo. The bonus PDF with illustrations from the book is a nice touch.

This is a great value!

Almost comes to 'modern age' ... what we call 'ancient egypt'. If you are truly a(n) historian or biblical scholar, you must read the Books of Enki followed by #1 and #3 in the series. Book #2 is just about the quests for 'eternal' youth. Not only is it boring, but it distracts from the narrative. Good luck!

Its easy to lose yourself thinking that the story is madeup, although it is history and if all that is mentioned has a smidgen of thruth imagine the consequences and the future of mankind!

lots of information to unpack

This book by Zachariah Sitchin was well-researched, excellently written, and perfectly narrated. I highly recommend it.

once again mr sitchen has bridge gaps amongst our history and brought to light wonderful theories, with compelling evidence to support it. well worth the read.

This is a very very interesting piece of writing. that should be taught in school's.

All most of us know is just the Bible,this is very informative of the past that I never knew of. Great read!!!!

Fantastic Knowledge To Have

I love Zacharia Sitchin's work and the narrator is captivating and reads EVERYTHING with passion and even pristine pronunciation like he created language itself. lol. I have all of his available Audible books.

loved everything about this book. I am starting the one inline hope it's as good

This is an eye opening and intriguing book. Considering Sitchin worked with the translations by other experts before him, it is worth reading/listening to and coming to your own conclusions on what the true history is.

It will make us rethink what we believe we know...