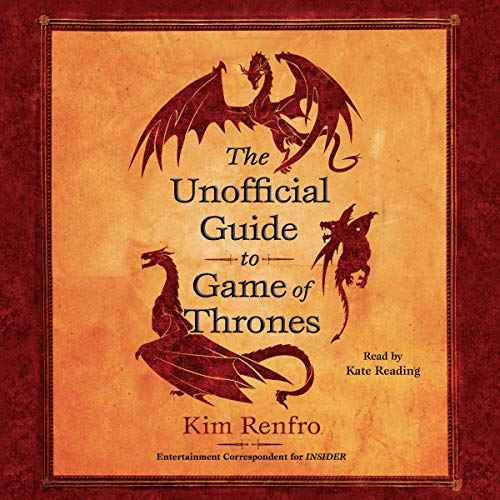 The Unofficial Guide to Game of Thrones

The everything-you-missed, wanted-to-know-more-about, and can’t-get-enough guide to the Game of Thrones television series - from the first episode to the epic finale. Valar morghulis!

There may be no happy endings, but there is plenty to discover and obsess over in this behind-the-scenes fan guide to the Game of Thrones HBO series.

Did the show affect George R.R. Martin’s ability to finish the book series? How did the show’s composer foreshadow the series’ end from the first note of the theme song? Why were the Stark direwolves all but cut from the show? Why did Ed Sheeran make a cameo in season seven? Who lives? Who dies?

Kim Renfro, entertainment correspondent for Insider and a huge GOT fan, goes deep into the show and the world of Westeros - from Winterfell to the White Walkers. Spanning every episode across all eight seasons, The Unofficial Guide to Game of Thrones explains scenes that don’t follow Martin’s books, and sheds new light on the themes, storylines, character development, the meaning of the finale, and what fans can expect next.

Entertaining, informative, and perfect for everyone who made Game of Thrones the most popular and talked-about HBO show ever, The Unofficial Guide to Game of Thrones is the perfect companion for watching and rewatching the series. Winter is coming....

A very informative book and a nice read.

This was a nice way to end the GOT saga of the past decade.

A must read for any Game of Thrones fan

Not only did this book help me to recontexualize conflicting feelings about both the unfinished novel series and the lackluster ending to the TV series, but it also gave me the mental bandwidth to be able to reengage with this material moving forward. I can't wait to continue following Kim's career and I hope there is another show on the horizon we can all watch together.