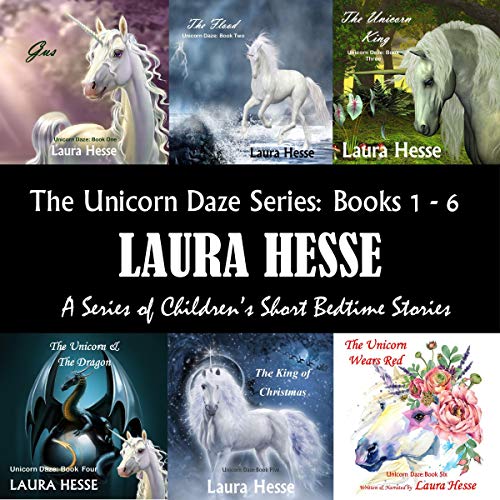 A six-pack of short bedtime stories for unicorn lovers of all ages.

Young Jessie is always being left behind. When she gets lost in a corn maze on Halloween Eve, she is befriended by a unicorn who takes her on an adventure to meet the Spirit Bear who guards the pumpkin patch from a pumpkin-stealing rat.

Join Gus and Jessie as they take a leap back through time to meet Noah and his wife just minutes before the Great Flood and learn what happened to all those silly unicorns in this short bedtime story.

Jessie and Gus, the son of the Unicorn King, cross the Great Plains and the Azure Sea after a wise Kilin sends them on a quest to find Gus’ father who hasn’t been seen in years. Along the way, they meet a helpful seagull and struggle to outwit a shark bent on stopping them.

Book four: The Unicorn & the Dragon

The ghost of Sir Lancelot helps Jessie and Gus stop a dragon from destroying the Great Plains and even Time itself. Jessie discovers how to release the power of the magical Karkadan horn to do good and Gus finds the courage to live up to being the son of The Unicorn King.

Book five: The King of Christmas

The three little pigs visit to the North Pole the day before Christmas ends in disaster when they give the reindeer the swine flu, leaving Jessie and Gus the task of convincing the Unicorn King to help save Christmas, even it means breaking one of the unicorns' most strict laws.