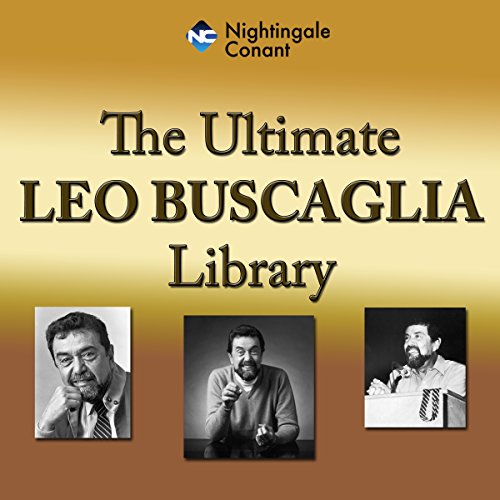 Philosophers and poets through the ages have tried to examine the powerful concept of human love - from Aristotle to DuJardin. Love has often been described as life’s prime motivator, but so often it’s found to be one of our most puzzling experiences.

The late Dr. Leo Buscaglia was perhaps one of the greatest experts on love - as a person who studied love intensely for most of his professional life. While teaching at USC, Professor Buscaglia was moved by a student's suicide to contemplate human disconnectedness and the meaning of life, and began a non-credit class he called Love 1A. This course quickly became one of the most popular courses at USC and formed the basis for a best-selling book in the 1980’s titled Love.

For years, Leo was a regular on public television, in magazines, and on radio interviews. Back in the 1980’s, Leo’s message was so well received because people found his message to be unifying and inspiring. In our current culture that seems so deeply divided, his message is needed now more than ever.

I think you’ll agree with me that Leo Buscaglia had a rare talent for showing us how we can experience, understand, and share more love. Leo Buscaglia suggested ways that we can bring more meaning to our lives by actively participating in the process of love. Leo believed that love is something we can learn and share with parents, children, friends, and strangers. His messages in this library are an urgent plea to be all we can be, because, as he said, “I like to think that the day you were born you were given the world as your birthday present. It frightens me that so few people have ever bothered to open up the ribbon. Well rip it open, cut off the top! It’s so full of love and magic and life and joy and wonder and tears - all of the things that are your gifts for being human.”

We begin this first volume with a series of live and studio segments where Leo answers the question: What is love? After listening to this volume, you’ll have a very good understanding of Leo’s answer to that question. During the rest of this series, we will continue to fill in the gray areas of that question by going deeper into the specific qualities of love. You’ll hear Leo in a number of venues: in front of thousands of people in an amphitheater, in front of just a small and intimate gathering of people on a variety of television shows and at our Nightingale-Conant studios, in a dynamic interview with the late PBS personality John Callaway, and alone in studio with Leo discussing the topic of love directly with listeners. Finally, we share another of classic segments taken from Leo’s unique Nightingale-Conant audio program, The Way of the Bull, which detailed lessons on life, spirituality, and love that Leo learned on his travels around the world as a young man.

I’m sure you’ll truly enjoy Dr. Leo Buscaglia. His zest for living to the fullest is an inspiration to us all.

Embrace the philosophy of Leo Buscaglia!

I have viewed many of the late great Leo Buscaglia speeches, videos, and books. I was hoping to get a greater degree of exposure to his work through this audio version. I thoroughly appreciated the live recordings because of Leo's para-verbal communication and interaction with the audience. The interjection of Leo's other audio books proved to be interesting with the varying oriental music and accents.You will find this audio version is actually snippets and clips of various speeches and other audio books. BE AWARE...there are many parts that skip forward. Nightengale exaggerated "The Ultimate" in the title of this audio presentation. I appreciate this compilation of his various works, but would not define it as "Ultimate" because this is very misleading to someone who appreciates and has studied the work of Leo Buscalgia. This is more of an introduction to the man and some of his work. I selected 5 for the story because it does bring the beauty and grace that personified Leo Buscaglia and his life. I am a helping professional that seeks to embrace and extend this loving philosophy to all this who come in contact with me. Comprehensive, no!; Introduction, yes!

I've been a fan of Leo Buscaglia's work since 1998, but honestly, I never even considered looking up Leo Buscaglia on audible.com until recently, which is when I discovered this collection. The audio has been significantly upgraded from the cassettes that are available, and that's awesome - it sounds crisp and clear. However, there's an aspect of this collection which kind of drives me insane: it's not complete. Basically, this is a kind of playlist of Leo, and while the selections are fantastic, it drops out mid-lecture to play some bad music and then switches all of the sudden to a random chapter of one of his audiobooks. Maybe it's an easy sell for someone who hasn't been introduced to Leo's work, but I prefer a lot of his lectures to his books, despite enjoying his written works as well. Nightingale Conant doesn't seem to understand how much of a significant collection of his work they own, and more so, how they could cash in on it. I would totally pay for all of his remastered works - especially the lectures - and I was mistaken to expect this collection was merely all of his lectures in one nice basket. The selections made from his audiobooks, mostly from Way Of the Bull, were well selected, despite the stereotypical and borderline offensive asian voices performed by various voice actors. Honestly, there was a lot of aspects of this collection I didn't understand, but at the same time, it's all Leo for ten hours, and that's worth it.

It doesn't end there, unfortunately. I think Leo suffered from the conventional wisdom of the time that a great way to teach was to tell a cute little story. Gag.

If you can put all this aside, the messages are terrific. Leo as the passionate speaker, is wonderful. When he's produced as a studio speaker - less than wonderful. It's a real shame he is not a current cultural contributor, or this past work comes with so much korny baggage and poor packaging. We need more Leos...