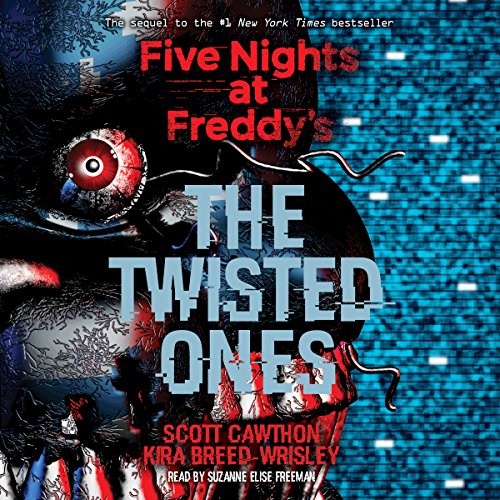 From the creator of the best-selling horror video game series Five Nights at Freddy's comes the sequel to The Silver Eyes.

It's been a year since the horrific events at Freddy Fazbear's Pizza, and Charlie is just trying to move on. Even with the excitement of a new school and a fresh start, she's still haunted by nightmares of a masked murderer and four gruesome animatronic puppets. Charlie thinks her ordeal is over, but when a series of bodies are discovered near her school - bearing wounds that are disturbingly familiar - she finds herself drawn back into the world of her father's frightening creations. Something twisted is hunting Charlie, and this time if it finds her, it's not letting her go.

This book is amazing I love it so much ahhh Charlie can't be... She's ... you just have to listen to the book to find out what happens not gonna spoil it😁😁😁

well worth a listen if you like fnaf it's worth it

I got this with a credit along with book 1. if recommended this to any fnaf fans 5/5

I loved the story, I cannot believe how this one ended. I just about threw my device at the wonderful, horrid, suspense of the ending. I cannot wait for book 3!!!!!!!!

story dragged on, slow pace. Reader is very one tone with no excitement in her voice.

I love this book.

The story was just ok, and the narrator sounds totally dead and very monotone throughout

This story is addictingly mysterious, terrifying, and heartbreaking! An amazingly infuriating cliffhanger that leaves you needing more. I can't wait for the next part if the story!

Amazing! Can't wait for the next book!

I was hooked from the first chapter just like the first novel. I loved the entire story and will recommend it to everyone. I really can't wait for the next book.

Probably the best (so far) of the whole series.Great climax with its revelations about Charlie's past and THAT ENDING THO....

I would rather it been read in google-text-to-speach but the story was amazing. I only set it down to get a way from the narrator.

I loved the story, but there are many plotpoints tha could have been resolved by just calling the police. Seriously.