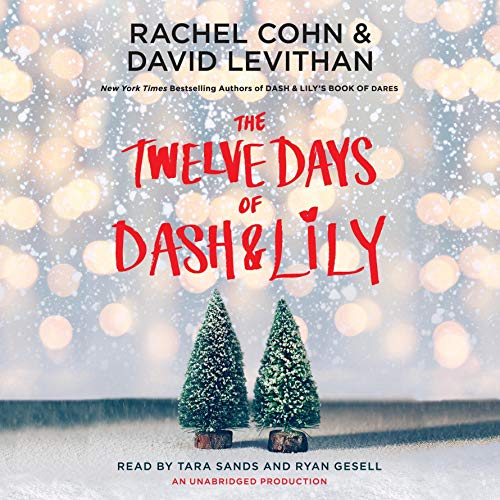 The Twelve Days of Dash & Lily

Dash and Lily have had a tough year since fans watched the couple fall in love in Dash & Lily’s Book of Dares. Lily’s beloved grandfather suffered a heart attack, and his difficult road to recovery has taken a major toll on her typically sunny disposition. Lily’s spark has dimmed so much that Langston, her brother, has put aside his grudge against Dash to team up and remind Lily what there is to love about life.

With only twelve days left until Christmas - Lily’s favorite time of the year - Dash, Langston, and their friends take Manhattan by storm to help Lily recapture the holiday spirit of New York City in December, a time and place unlike anywhere else in the world. Told in alternating chapters, The Twelve Days of Dash & Lily is bound to be a Christmas favorite for seasons to come.

“Hilarious and heartfelt...[captures] the emotions of teen love, along with the hilarity of young adult life.” (School Library Journal)

"Hilarious and heartfelt...[captures] the emotions of teen love, along with the hilarity of young adult life." (School Library Journal)

the political commentary could be left out , would be the better for it and not date the story and make irrelevant in the future

really enjoyed it!Saw the first one on netflix!!

Was first introduced to dash and lily by watching it on watching it on netflix .Im hooked loved listening to the second book..Cant wait to listen to the 3rd book..

I really loved the Netflix special and these books are bringing me joy this season! Decent follow up!

Dash and Lily are Great Characters

Dash and Lily make this such a fun book. It is A lovely Christmas romance that really keeps guessing all the way through. truly on the edge of your seat.

Dash and Lily left off with high hopes of knowing more about their relationship. This second book delves more into the trials and tribulations of what might go on in a teenage loves head. All of their fears and angst. I live how the authors continue the back and forth banter between these two characters!
A great sequel to the first! I hope Netflix makes season 2 using the same actors next season!

far fetched but fun to listen to. if only a boy like dash existed. he doesn't.

Would you listen to The Twelve Days of Dash & Lily again? Why?

Yes, the book told a good story and the narrator portrayed it well.

Lily because she reminded me of one of my best friends.

What does Tara Sands and Ryan Gesell bring to the story that you wouldn’t experience if you just read the book?

The voices seem to come to life.

Yes, it made me cry because it made me think of how some couples are just meant to be.

not a must read

cute story overall but the characters (especially Lily's) are rather shallow and the story is not that interesting. the perfomance is ok, l liked Dash's narration better.

The story started out as a quite enjoyable one, but when the author's had to insert absolutely disgusting ideas to a Christmas Tradition, it ruined everything!

Has The Twelve Days of Dash & Lily turned you off from other books in this genre?

I quite realistic fiction, but I will tend to stay away from these authors from now on.

The story was good to begin with, but there is no need to cheapen a good story with an absolutely disgusting idea.

I literally cannot stand the woman's voice - it drove me crazy and made it difficult to listen. I kept wanting to turn it down so far I wouldn't be able to hear the story