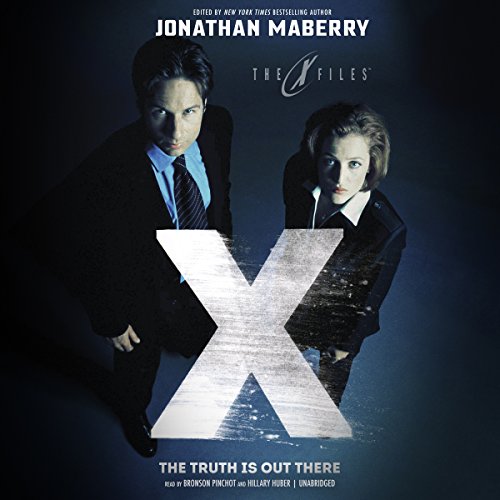 The Truth Is out There

Ce que les auditeurs disent de The Truth Is out There

The Truth Is In Here

The X-Files: The Truth Is Out There is the second prose anthology in IDW Publishing’s series edited by bestselling author Jonathan Maberry.

As a long-time fan of The X-Files, going back to the pilot episode in 1993, I’m delighted by the resurgence and interest in the on-going investigations led by FBI Special Agents Fox Mulder and Dana Scully (aka, The FBI’s Most Unwanted), and the anthology format provides readers and audiobook listeners with plenty of interesting new cases from various writers. However, while I mostly enjoyed my time with The Truth Is Out There, I can’t help but feel that it is a weaker anthology than its predecessor, Trust No One. There are several stories that stand out as being incredibly strong, but there are also a number of mediocre entries, and one, “We Should Listen To Some Shostakovich,” that is downright awful.

Kelley Armstrong and Jon McGoran get the book off to a strong start, the latter presenting a really interesting story of time travel. Bev Vincent’s “Phase Shift,” was easily the highlight of the anthology for me, and centers around a house and its inhabitants confronted by a strange anomaly. This is a really good story with a strong, and strongly executed, premise, the ending of which highlights the particular darkness one may confront in such an odd situation. Sorry for being vague, but this is a good one to go into blindly.

Hank Schwaeble brings a welcome dose of ludicrousness to the table with “Male Privilege,” where the men of a small town have suddenly grown breasts. Over the years, The X-Files has shown considerable elasticity in the nature of its premise, ranging from ultra-serious to straight-up goofball comedy, and “Male Privilege” runs to the latter end of this continuum, feeling a bit like a Darin Morgan tribute. On the other end of the continuum then, is Sara Stegall’s “Snowman,” a terrific conspiracy and monster caper involving a search for missing Marine’s in the wintry woods of Washington, and reunites Mulder and John Doggett. Props to Stegall for bringing Doggett, an X-Files alum who has been underserved in the latest renaissance of The X-Files, back into the fold for a brief time.

Of the fifteen stories comprising this anthology, the above-mentioned are the ones that really stood out to me. Unfortunately, “We Should Listen To Some Shostakovich,” by Hank Phillipi Ryan, stood out as well, but for entirely different reasons. Set in 2017, the story is far out of continuity with the series and its recent reboot and features a married Mulder and Scully who are expecting a child. I could have given this premise a pass, but Ryan’s characterizations are so out of synch with the character, and the central mystery surrounding numerology and a painting of the composer Shostakovich making its way to their apartment door, is so lackluster it barely feels like an X-File at all. Not much happens aside from the intrepid FBI agents staring at the painting and Googling stuff.

Those who listened to the previous anthology will know what to expect in terms of narration. Bronson Pinchot and Hillary Huber return, and take turns narrating individual stories depending on who the central point of view character is. If it’s primarily a Mulder story, Pinchot delivers a fairly flat voiceover, which turns even more monotone during Mulder’s dialogue in an effort to capture actor David Duchovny’s performance. Overall, though, Pinchot seems flatter in this anthology than he did with the previous one. Huber does solid work, which struck me as an improvement over her prior turn with these characters and their stories. Unfortunately, neither know how to pronounce the name of Frohike – long-time fans will know the Lone Gunman’s name is said “fro-hickey” and not “fro-hike” as it appears in print.

On the production side of things, there’s little to complain about. The sound quality is fine and the narrator’s maintain consistent tones and levels in their work. For whatever reason, the introduction by Lone Gunman actor Dean Haglund, which appears in the print volume, was not recorded (which is a shame, as I would have liked to have heard it).

The X-Files: The Truth Is Out There provides some solid entertainment over the course of 13 hours, even if it doesn’t quite hit the mark as well as Trust No One did. Still, it’s worth a listen and die-hard fans will find plenty of stories, the majority set during the series initial nine-year run, enjoyable and familiar enough to satisfy their itch for fresh cases of alien abductions, haunted houses, weird science, physics gone awry, and the occasional exploding head or two.

Absolute fun to listen. Always takes me back to when Xfiles was amazing. Must listen for anyone interested in the paranormal and or Xfiles fan.

Not as good as first one but still worth a listen

The stories were not as memorable to me as the first anthology. However the narration was stellar.

ALMOST as good as Volume 1. A treat for fans...

After hungrily listening to every minute of Volume 1, Volume 2 had some high expectations to meet, and in general, I really, really enjoyed it. Most of the stories were true to the series and enjoyable. A few were a bit ridiculous, and one was so out of character that I forgot it was supposed to be an X Files story. The author of "We Should Listen to Some Shostakovich" must have never taken the time to watch any of the episodes with Scully's mother, because she was written as a haughty, snobbish socialite. Mulder and Scully married and expecting a child was enough of a stretch in this story, but the characterization of Margaret Scully was so OFF that listening to the story was almost unpleasant.

Once again, we had the mis-pronunciation of Lone Gunmen Melvin Frohike's last name as "fro-hike" instead of "fro-hickey," which again annoyed me to the point of wanting to contact Blackstone Audio's production team to set them straight.

I would recommend this volume to fans, but with the few caveats mentioned above. I hope there will be a volume 3!

I enjoyed this one just as much as the first. Great stories and narration. I'd love to see a third installment.

ok the mispronounciation of Melvin's last name ruins the performance and indicates that Bronson Pinchbut never did any prior research of the characters. Also I find the delivery of Scully's character as a 13 year old squeaky High School ditz.

Would you consider the audio edition of The Truth Is out There to be better than the print version?

Never read the print addition but the audio is good.

What does Bronson Pinchot and Hillary Huber bring to the story that you wouldn’t experience if you just read the book?

Brings voice to it and makes it easy to picture them in your head.

The characters from the original series are not represented properly.

If you could play editor, what scene or scenes would you have cut from The Truth Is out There?

I would have never approved it.

I enjoyed the stories and references to some details from episodes. I didn't really like the story with Mulder and Scully married, but was actually more offended by the portrayal of Dana's mother than the actual marriage piece.

Wonderful, I want more like this book from x files. I loved everything about this book. Waiting for part 3