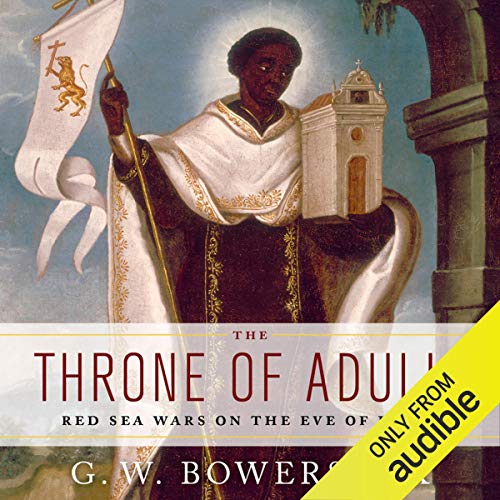 The Throne of Adulis

The Throne of Adulis

Just prior to the rise of Islam in the sixth century A.D., southern Arabia was embroiled in a violent conflict between Christian Ethiopians and Jewish Arabs. Though little known today, this was an international war that involved both the Byzantine Empire, which had established Christian churches in Ethiopia, and the Sasanian Empire in Persia, which supported the Jews in what became a proxy war against its longtime foe Byzantium. Our knowledge of these events derives largely from an inscribed marble throne at the Ethiopian port of Adulis, meticulously described by a sixth-century Christian merchant known as Cosmas Indicopleustes. Using the writings of Cosmas and a wealth of other historical and archaeological evidence from the period, eminent historian G. W. Bowersock carefully reconstructs this fascinating but overlooked chapter in pre-Islamic Arabian history. The flashpoint of the war, Bowersock tells us, occurred when Yusuf, the Jewish king of Himyar, massacred hundreds of Christians living in Najran. The Christian ruler of Ethiopia, Kaleb, urged on by the Byzantine emperor Justin, led a force of 120,000 men across the Red Sea to defeat Yusuf. But when the victorious Kaleb - said to have retired to a monastery - left behind weak leaders in both Ethiopia and Himyar, the Byzantine and Persian empires expanded their activity in the Arabian territory. In the midst of this conflict, a new religion was born, destined to bring a wholly unanticipated resolution to the power struggle in Arabia. The Throne of Adulis vividly recreates the Red Sea world of Late Antiquity, transporting listeners back to a remote but pivotal epoch in ancient history, one that sheds light on the collapse of the Persian Empire as well as the rise of Islam.

There is a lot of back history to get through before the book mentions Islam and Mohammed but it is well worth it.

Not what I thought it would be.

Even though the description of the book and author made it abundantly clear that this book was more an academic work than a narrative, for some reason I held on to the idea that an audible title would have to have some measure of value to the layman. I was extraordinarily mistaken. It was not that I couldn't follow what was read, I just didn't care about the long and thorough scientific and academic proof of the propounded theory, which I thought took up a good 70 - 80 % of the book. The salient point of the book is pretty much in the discrption of the title. They found a thrown of an Ethiopian Christian King who went to war across the Red Sea with support from Bisantean emperors against a Jewish kingdom suporrted by the Persian Shahs in Arabia. That was pretty much all.The rest was about how archeological and historic evidence prove this. A teadious read indeed.