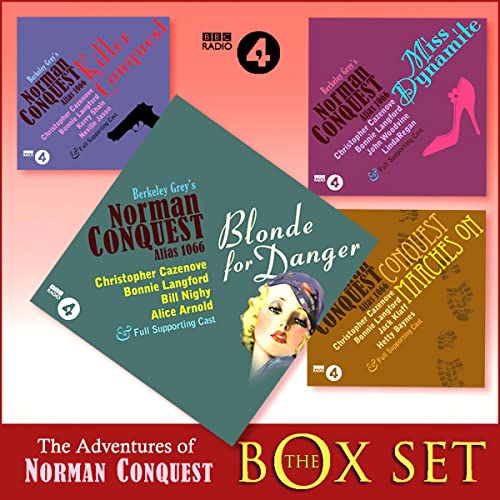 Following the success of the popular BBC Drama series, Norman Conquest is back! Set during the Golden Age of Detective Fiction, where every story promises a 'Thousand Thrills!', with ingenious plots, full of twists and surprises, driven along with exciting action and tongue in cheek humour, our fast-talking, hard-hitting adventurer with a nose for trouble keeps up good cheer while he biffs the baddies in four action packed adventures.

Our handsome desperado has to pit his wits against the evil crook Bosworth Field. But who is the beautiful blonde he finds lying in the middle of the road and who is she hiding from? And where exactly does J.J. Pace, the famous racing car designer fit into this?

The dashing hero with a nose for trouble and rake-hell disregard for danger returns in a breathless crime-smashing adventure. With his trademark ‘1066’ and his resourceful partner Pixie, he keeps up good cheer and marches on while he biffs the baddies.

Having met a beautiful young lady in the middle of the night, our gentleman adventurer soon finds himself on the trail of a gang of jewel thieves. Is the pretty girl as innocent as she seems? Are diamonds really a girl’s best friend? Can ‘1066’ solve the mystery of Miss Dynamite?

As our fast-talking, hard-hitting adventurer finds himself accused of assaulting a pretty young lady on the underground. It’s only when our hero '1066' discovers that the young lady is the victim of a mysterious blackmailer known as 'The Voice', he marches into yet another hell-for-leather action packed adventure in search of the baddies.

Based on a stories by Berkeley Gray.

"It is pure 1930s, when the hero did say to the villain: 'Good grief! You're a cold blooded killer!' and the heroine did affectionately call her hero 'a cockeyed chump!' To all concerned 'Jolly good show, chaps'." (The Times)

"Christopher Cazenove seems to relish his role as Norman Conquest, a hero about who dashing is the least that could be said! Atmospheric and great fun for those who prefer older-style detectives." (Daily Express)