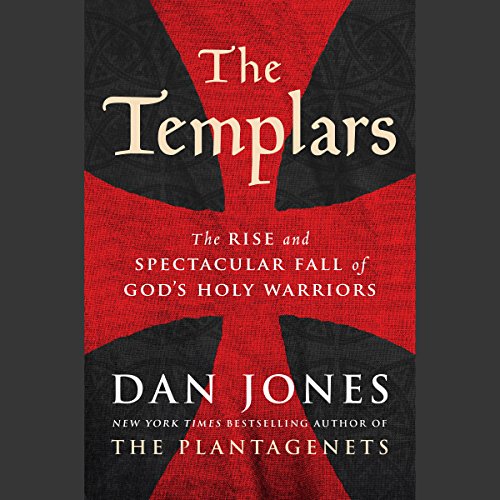 Jerusalem, 1119: A small group of knights seeking a purpose in the violent aftermath of the First Crusade decides to set up a new order. These are the first Knights of Templar, a band of elite warriors prepared to give their lives to protect Christian pilgrims to the Holy Land.

Over the next 200 years, the Templars would become the most powerful religious order of the medieval world. Their legend has inspired fervent speculation ever since. But who were they, and what actually happened? In this groundbreaking narrative history, the best-selling author of The Plantagenets tells the true story of the Templars for the first time in a generation, drawing on extensive original sources to build a gripping account of these Christian holy warriors whose heroism and depravity have so often been shrouded in myth.

The Templars were protected by the pope and sworn to strict vows of celibacy. They fought the forces of Islam in hand-to-hand combat on the sunbaked hills where Jesus lived and died. They found their nemesis in Saladin, who vowed to drive all Christians from the lands of Islam. They were experts at channeling money across borders. They established the medieval world's first global bank and waged private wars against anyone who threatened their interests. Then, in 1307, as they struggled to secure their last strongholds in the Kingdom of Jerusalem, the Templars fell afoul of the vindictive and impulsive king of France.

On Friday, October 13, hundreds of brothers were arrested en masse, imprisoned, tortured, and disbanded amid accusations of lurid sexual misconduct and heresy. They were tried by the Vatican in secret proceedings. But were they heretics or victims of a ruthlessly repressive state? Dan Jones goes back to the sources to bring their dramatic tale, so relevant to our own times, to life in an audiobook that is at once authoritative and compulsively listenable.

I don't really know what I expected; I've only had a fleeting interest in the Templars before but having read all of Mr. Jones' prior published works, I was very interested in this new piece.
That being said, I felt the book really went in depth to the story of the creation, existence and fall of the Templars and that he took considerable effort to dismiss the Hollywood version of the facts that most of us know about the organization. I really enjoyed how he shared lesser known details and the backstories of how events came to be, but there came a point in the final few chapters that these details began to almost bog down the story. It was as though he had to share a sub-story and all of its workings to get to the point of a fact he was trying to explain as he detailed the fall of the organization. I found I had to go back and re-listen to the narrative between the Pope and the new &quot;Vatican&quot; of France a few times to follow where he was leading me.
Mr. Jones is very articulate, his pronunciation was clear and made for an easy listen.
My only complaint, if you can call it that, was that at several points you get to a period in the story where a specific event has occurred, such as the death of a notable individual, and yet the next chapter they are alive &quot;again&quot; because they are part of the backstory for an event he is explaining. This made it a little difficult to follow along and probably would have been easier to do if I were reading as opposed to listening.
Otherwise, if you've any interest in knowing about the Templars beyond the Holy Grail and Dan Brown or Hollywood, this is well worth the listen (or read).

Dan Jones is a rarity - a lively and informed writer who is also a great narrator of his own work. Because the Templars are bound up in the history of the Crusades, there is much here about the Crusades and the Crusader states as well. The Templars came to a sad end, crushed (and burned at the stake) by a French king eager to get his hands on their money. A brief epilogue dispenses with the many vast conspiracy theories involving the order.

Epic journey into the history of the Templars

Dan Jones does an excellent job covering the history of the Templars from the very early humble beginnings, rise to power, till the very end, with an epilogue about the time that follows.

His narration is really excellent as well. Rare to find excellent author and narrator at the same time. I enjoyed every minute of this book.

If you got interested in the Templars story from Assassins Creed game like me, there will be very little about the assassins, as this is not a fantasy but history. I am still glad I took the time to go through it. And being from Muslim country, we've been taught the history at young age from Muslim side. So it was interesting to see a more neutral perspective, focusing on the templars side, who are also on a holy crusade.

DAN Jones is able to combine historical facts with a riveting account of the Templar Knights. I had a hard time limiting my audible time each day which takes place during my morning runs. On one particular morning I was so taken up with the narrative I ran 5 miles beyond my normal 3. That speaks volumes for Dan Jones story telling. Loved every minute of it.

A Comprehensive Overview of the Knights Templar

A thorough over view of the famous crusading military order, the Templar Knights. From the founding of the order, to its demise this book is overwhelming in breadth in the history and geography that are relevant to the tale of the Knights. In addition to the Knights, the book also provides an overview of the crusades.

As a person with a degree in histoy this audiobook is the perfect blend between detaled description and colorfull rendition of the templar story.

Amazing story with some random tangents centered on England which are a little out of place.

Readable, Not Too Deep

Would you listen to The Templars again? Why?

Probably not - it's a good book, but once was enough. I'd be more inclined to read something else about the period.

Along with the narrative of the crusades, I appreciated the occasional sections on economics - how the Templars raised, stored, and used their vast income. The one thing I missed was an discussion of how the Templars and other Orders built the huge castles and compounds along the Mediterranean shore. Did they import European masons? Hire a master and train local workers?

Dan Jones does a good job narrating his own text in an understated manner. This is a crisp and informative book, a good overview of the Templars.

While this is another delightful narrative history by Mr. Jones, it suffers from his 'modernization' of all the names of people and places related to the Templars. While this may not be a problem for people new to the history of the Templars, it can be confusing to anyone with more than a passing knowledge of the order. A primary example, which drove me personally crazy while listening to the audio edition of the book, was the 'updating' of the name of the final Grand Master of the Templars, Jacques de Molay to James of Molay.

However, I can find no real complaint to Dan Jones' measured delivery of the text of his book as the narrator of the audio edition. Listening to him read his own work somewhat makes up for the confusion caused by the updating and changing of place and personal names.

A great listen about an all too often fantastical and murky subject. Jones gives an entertaining and clear narrative about the Templars that is better than any fiction.

A wonderful account of the Knights Templar! I most certainly recommend this book to anyone with an interest in history!