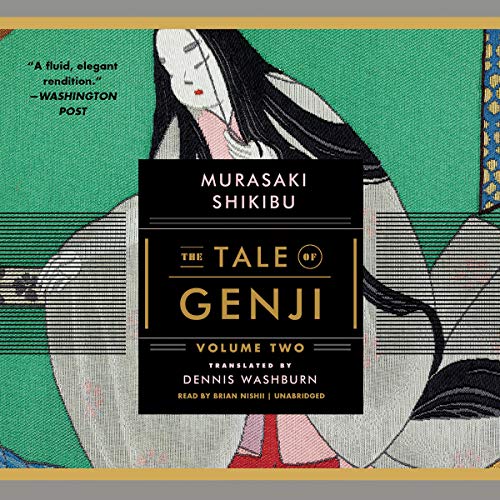 The Tale of Genji, Volume 2

Murasaki Shikibu, born into the middle ranks of the aristocracy during the Heian period (794-1185 CE), wrote The Tale of Genji - widely considered the world’s first novel - during the early years of the 11th century. Expansive, compelling, and sophisticated in its representation of ethical concerns and aesthetic ideals, Murasaki’s tale came to occupy a central place in Japan’s remarkable history of artistic achievement and is now recognized as a masterpiece of world literature.

The Tale of Genji is presented here in a flowing new translation for contemporary listeners, who will discover in its depiction of the culture of the imperial court the rich complexity of human experience that simultaneously resonates with and challenges their own. Dennis Washburn embeds annotations for accessibility and clarity and renders the poetry into triplets to create prosodic analogues of the original.

So very satisfying are the first chapters of Bk 2 (before the Blank Chapter), as we see Genji's growth from self-centeredness and impulsivity to introspection, devotion to family, and pondering a spiritual path. Might Shikibu herself have been preoccupied with end of life concerns at this point, contributing to a sense of urgency to complete the development of each character and The Tale itself? Life can be so difficult to navigate for those with less privilege, especially when outrageous advantage is taken or threatened. For the women at court, discretion, circumspection and avoidance could be employed in order to stay safe. But how easily might one be tricked, cajoled by poetry or promises, or even betrayed by one's own trusted attendants, and if/when it happened, there would be no one to blame but oneself, one's own karma. To avoid social calamity, some of the women speak of jumping in the river (suicide) or cutting their hair (taking the veil). Might Shikibu even have longed for this herself, but the beautiful children of the court and the need to teach them (think of Genji's Murasaki who was a doting step-mother), or the demands of Shikibu's superiors at court for just one more story, or Shikibu's own worldly attachment to her characters' lives and development of The Tale, might these and other worldly demands have held her back? Might Shikibu have vowed to finish her work, in spite of illness or tiredness, or aging, until that day came when, quite suddenly, there was only just that final white page... In the last chapters (Audible ch. 42 ff) we see that the option of rejecting this world and turning spiritually inward (becoming a nun) is very much discouraged for all but very old women, almost a taboo for a young, beautiful, desirable woman to consider. There is really no escape for a woman at court except perhaps turning to the brush, if only to write poetry while pretending to practice calligraphy. But then, too, as Shikibu so often demonstrates, there's always a good story and good humor, which may be the best of all ways to cope, when things are destined by karma to be as they are; think for example of Genji as the older lover patiently rap, tap, tapping on the door of the screen while the women inside pretend to be asleep or the besotted young lover and his obsession with his beloved's little Chinese cat, not even a very pretty cat at that. Of all the marvelous characters of The Tale, my favorite is the gifted one, herself obscured behind the screen of her own creation, brush in hand and ink stone at the ready. If only I could pull back the screen to sneak just one little peek!