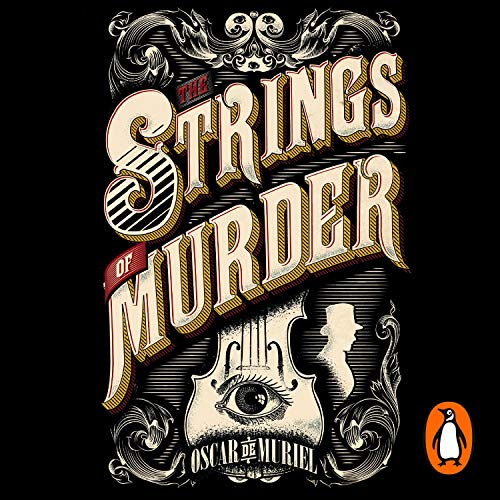 The Strings of Murder

The Strings of Murder

Penguin presents the unabridged downloadable audiobook edition of The Strings of Murder by Oscar de Muriel, read by Andy Secombe, including musical interludes recorded by the author himself.

Edinburgh, 1888. A virtuoso violinist is brutally killed in his home. But with no way in or out of the locked practice room, the murder makes no sense. Fearing a national panic over a copycat Ripper, Scotland Yard sends Inspector Ian Frey to investigate under the cover of a fake department specializing in the occult.

McGray's tragic past has driven him to superstition, but even Frey must admit this case seems beyond reason. And once someone loses all reason, who knows what they will lose next...

What made the experience of listening to The Strings of Murder the most enjoyable?

I have been bingeing on late Victorian murder mysteries lately. This weeks example is Strings of Murder by Oscar de Muriel. This story concerns disgraced young aristocratic investigator Ian Frey who is assigned to semi-barbarian Edinburgh to investigate the politically sensitive murder of a violin virtuoso. Frey is a bit of an a-hole of the snob variety given to snide comments. He is assigned to work not only with but under Inspector McGray, also an a-hole but of the thug variety given to responding to perceived insults with physical assaults. Worse, McGray is the head of an X Files like department and the clear demonic signs of the instant murder allow him free reign to his superstition, much to the annoyance of Frey. I was a music major as an undergrad and one thing that attracted me to this book is the musical connection. It seems a cursed violin may be responsible for a number of grisly death, the very violin that that Tartini (in real life) used to compose, or more accurately, to transcribe the Devil's Trill Sonata composed by the Devil himself in Tartini's dream and then owned by Paganini who (in real life) was alleged to have sold his soul to the devil in exchange for his virtuosity. Together they work to solve a grisly locked room murder.

A little heavy on the Scottish accent, made it a little difficult to understand for a hick from the sticks such as yours truly.

I enjoyed this audiobook. The characters are interesting. The diversity between them excellent. The story line interesting. All this makes the plot hold together well. Andy Secombe does a good job with his narration. The accents are a bit strong for those not used to hearing them. It takes a bit to get your ears trained to understand them. I recommend this book especially for those who like Victorian Era mysteries.

Enjoyed this title very much. Looked forward to riding in the car for the first time in a while. Great performance, hearing the accents really added to listening experience.

The narrator was my favorite part he did great accents and had great comic timing.
I hope this becomes a series.

Narrator and story absolutely superb, I enjoyed every minute of it (for the third time now, it's that good). I especially appreciate the relationship between the two main and very different characters. I, for one, am tired of buying mysteries only to find them part romance novels. The Strings of Murder is a gem and I sincerely hope that Mr. De Muriel is busy on his next novel!

A murder mystery spiced with humor! I enjoyed the story and pace of the narration enormously. The narrator made the story and the humor quite vivid; I could put the book down. I hope to see more from both author and narrator.

I am ready for the sequel!

This book was so much fun! It had vivid and likable characters and a intriguing story. Andy Secombe truly brought life to the characters. I cannot wait for a sequel and please please Mr. Secombe narrate more books!

Gothic thriller with a sense of humour

Hugely enjoyable. The story is engaging, the characters are well-developed and amusing and the murders are horribly gruesome. This Gothic murder mystery is brilliantly performed by Andy Secombe.

The Frey & McGray series is excellent and it gets better with each new title. It spoiled me for many other mystery series. There are great characters and the stories are interesting, unpredictable and thrilling - plus really good humour. And Andy Secombe's performance only enhances those parts. I can't wait for the next book, and the one after that and many more

the speaker makes the story interesting. good crime story with a hint of goth. best part is when the Protagonist hit Edinburgh.

Most excellent performance. a story full of suspense and humour, lined with a lot of humanity.