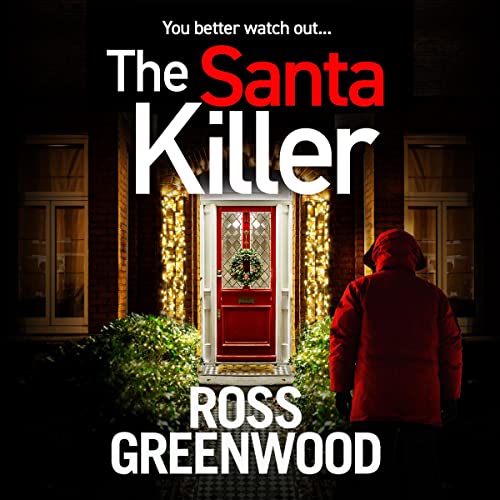 The Santa Killer is coming to town....

One night less than two weeks before Christmas, a single mother is violently assaulted. It’s a brutal crime at the time of year when there should be goodwill to all. When DI Barton begins his investigation, he’s surprised to find the victim is a woman with nothing to hide and no reason for anyone to hurt her.

A few days later, the mother of the woman attacked rings the police station. Her granddaughter has drawn a shocking picture. It seems she was looking out of the window when her mother was attacked. And when her grandmother asks the young girl who the person with the weapon is, she whispers two words.

The rumours start spreading, and none of the city’s women feel safe—which one of them will be next?

He’s got a list. It’s quite precise. It won’t matter even if you’re nice.

Ross Greenwood is back with his bestselling series, perfect for fans of Mark Billingham and Ian Rankin.

"Move over Rebus and Morse; a new entry has joined the list of great crime investigators in the form of Detective Inspector John Barton. A rich cast of characters and an explosive plot kept me turning the pages until the final dramatic twist." (Richard Burke)

"Master of the psychological thriller genre Ross Greenwood once again proves his talent for creating engrossing and gritty novels that draw you right in and won’t let go until you’ve reached the shocking ending." (Caroline Vincent at Bitsaboutbooks)

"Ross Greenwood doesn’t write clichés. What he has written here is a fast-paced, action-filled puzzle with believable characters that's spiced with a lot of humour." (Kath Middleton)

Excellent edition to this series

David Thorpe as narrator is one of the best. I enjoyed the story, do hope there will be more DI Barton books to come.

I enjoyed this series very much. I loved getting to know the steady characters
throughout the series as well as the new characters introduced in each book. Very well written and great story lines!

Love the detectives and the story lines. Sad to see Detective Baryon retire but many more detectives to keep story going.

Another great addition to 'the killer' series

Ross Greenwood's series is wonderful! I'm a sucker for British humour and crime. His D.I. Barton series has both! The short chapters keep me entertained and hooked on what's to come! David Thorpe is an animated narrator as well; I enjoy his take on the characters.

Fun book but kind of predictable.

I enjoyed this book but was not too complicated. I enjoyed listening to the reader’s British accent. Loved the British vocabulary too.

So far I have read 4 of the killers in the series I loved every single one of them. Some of them make me laugh so hard while I’m driving I feel like I have to pull over because I can’t see with the tears in my eyes. The narrator is Fantastic and I’m looking forward to reading more of these books. It’s funny how you think you know who the killer is and then as a twist at the end. I love it. Looking forward to reading more.

I really love this series. I hope this isn't the end! I love the layers and depth of the stories. I've enjoyed every book and every character.

A wonderful ending to a career and the start of a new beginning for DI Barton. I really enjoy Ross's books they are just so naturally written. Things like bringing your wife flowers for now reason and her reaction, others like we're all under the spectrum with our own daemons. The criminals in their own way had their own demons from their past which all is explained.
The roundup of the series was lovely everyone was accounted for and ended with the happiest of news. The narration was spot on as usual.

I just love this series! The characters, the narrator. I love the different points of view! So good!

Wish the narration were better

I’ve listened to all the books thus far in the series, although this is my first review. I enjoy the stories, the characters, insights into each criminal and how they think. The mysteries and solutions often have an unexpected twist, sometimes several of them.There’s a nice balance between a cozy and a noir in every storyline. So I wait, always, for the next book in the series, hoping time after time, to no avail, that there will be a new narrator (typically I don’t like to have the narrators change, as the characters tend to change along with them)). Sadly, the narration of this series tends toward blandness, undermine the telling. The voice is flat, the tone, cadence, and manner of speech of each character are almost the same … to the point that it’s difficult to tell the difference between a man, woman, or child, let alone differentiate each character as an individual. I’ve not heard David Thorpe narrate any other book, and if he does the style might work well in those … in the case (no pun) of DI Barton, the narration does an injustices to the series.