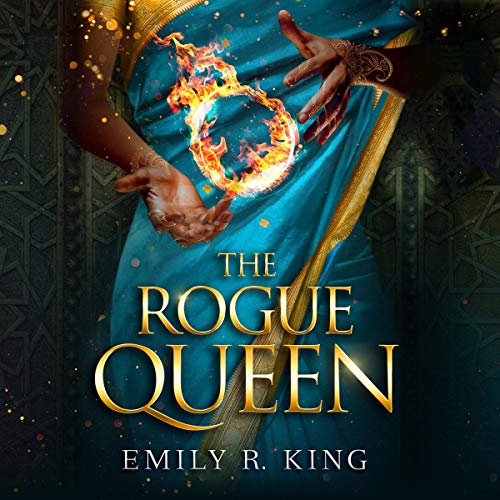 In the explosive third volume of The Hundredth Queen Series, the queen of fire faces off against a demon of ice.

Despite the odds, Kalinda has survived it all: Marriage to a tyrant. Tournaments to the death. The forbidden power to rule fire. The icy touch of a demon.

That same demon now disguises itself as Rajah Tarek, Kalinda's late husband and a man who has never stopped haunting her. Upon taking control of the palace and the army, the demon brands Kalinda and her companions as traitors to the empire. They flee across the sea, seeking haven in the Southern Isles.

In Lestari, Kalinda's powers are not condemned, as they are in her land. Now free to use them to protect those she loves, Kalinda soon realizes that the demon has tainted her with a cold poison, rendering her fire uncontrollable. But the lack of control may be just what she needs to send the demon back to the darkest depths of the Void.

To take back the empire, Kalinda will ally with those she distrusts - and risk losing those most loyal to her - to defeat the demon and bring peace to a divided nation.

This series is good, but the male narrator that was added for book 2 and 3 mispronounces the main character’s name in BOTH audible books!!!! There is NO excuse for him to be doing it AGAIN. The main character’s name is Kalinda, but she goes by “CAL-ee”, like Allie. The male narrator and her love interest pronounces her name “call-EE”, like Ali as in Muhammad Ali with the emphasis on the second syllable. Not only does he say it wrong but he puts the emphasis on the wrong syllable. Oh, maybe he has a cool accent, you might be wondering? NO. Both characters have an American accent.

The second narrator is RUINING the audio experience. It’s so distracting- it actually makes me dislike the character and think that he’s stupid.

Brace Yourself - No Spoilers.

Once again, Emily King proves her mastery of world-building and story-crafting. I don't want to elaborate too much for obvious reasons, but I can promise you that this book will make you feel a spectrum of emotion few books can cultivate. I cannot wait for the next one!

I would have preferred this to be like the first one... only narrated by Lauren Ezzo. Scott Merriman takes away from the enjoyment of the book.

I couldn't get through it. The protagonist is supposed to be a strong woman, but the narrator made her sound whiny and insecure, thanks in part to the author's decision to make her emotionally subservient to a man. Maybe a different pairing would have been better.

All of the books on this series are GREAT! I am looking forward to the next one! I am invested in all of the characters!

I loved this installment in Kalinda's story. The story sucked me in and the narration was excellent! this is the perfect example of what an audio book should sound like!

I enjoy rereading this whole series. It is a series I come back to you. Over and over again.

I have thoroughly enjoyed this whole series so far! the characters are engaging, and the story is enchanting. The narrators do a fabulous job with their various voices, and it makes it easy to keep each character straight.

A lot of this one retelling the first two.
But it carries the story along.