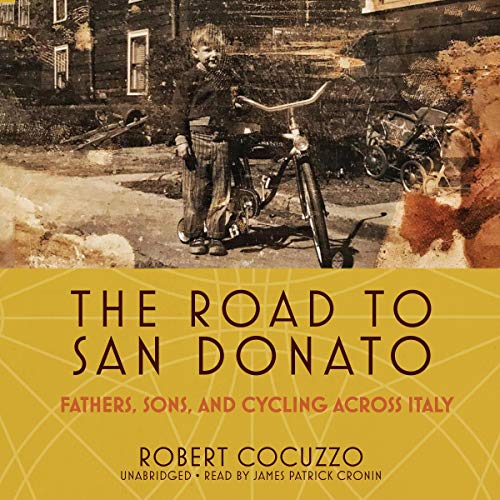 The Road to San Donato

The Road to San Donato is an adventurous and nostalgic bicycling memoir of an American father and son tracing their Italian heritage. Riding rental bikes and carrying a bare minimum of supplies, Rob Cocuzzo and his 64-year-old father, Stephen, embark on a 425-mile ride from Florence to San Donato Val di Comino, an ancient village in the mountains outside of Rome from which the Cocuzzo family emigrated a hundred years earlier.

Prompted by Rob's ailing grandfather, who regrets having never visited his home village, the two cyclists pledge to make the trip in the old man's honor. Despite an expired passport, getting lost, some near misses, and other misadventures, the father and son finally reach the quirky village of San Donato. For Italian Jews in the 1940s, the road to San Donato was one of exile, and many of the people in the village banded together to protect nearly a hundred Jews. While meeting his many new cousins, Rob attempts to unlock this history and glean what role his family played at the time - resistors or collaborators? The Road to San Donato is a generational story that many Americans share and a travel adventure not to be missed.

I never wanted this book to end.

What is most striking about this beautifully written account of a father and son's bicycle journey through Italy, is that it is far more of an introspective dive into the authors soul; but with candor, humor and descriptive prose that leaves the reader (listener) squarely alongside. This vivid depiction of the human condition; fraught with all of the things said and left unsaid, done and left undone, intimately weave into one of the best memoirs that I have ever read. There are historical perspectives that enrich the personal narrative in a particularly powerful way. A must read!

From start to finish this book had me at the edge of my seat. Not only is it well written, it gives a chronological recollection of the journey from Boston USA to San Donato Italy. Every new place they rode I got a very great description of what the place was like. How it looked, the vibe and people. My favorite part of the book was at the end where the author after pondering his families involvement in the the protection of Jewish people, sighed a breathe of relief finding out they were on the right side of history. Ironic how your ancestors helped the Jewish people that came to San Donato, now you’re married to a Beautiful Jewish lady! I recommend this to anyone. Time to go start my own journey thanks to your inspiration Rob!

Transfixed the moment I started listening. I loved the narration by James Patrick Cronin. A combination of bike adventure, coping with loss, and insight into family and origins.

I thoroughly enjoyed this book and the depth the author went into. Highly recommend.
Well done.

This was included with my audible subscription and I love a good travel story so I decided to give a shot. It was really sweet and entertaining.

This book was meaningful, entertaining, poignant, and all other possible positive adjectives. I have listened to hundreds of books. This is one of my favorites. The narrorator was great. The quality of writing was equally exceptional. The empathy, understanding, and challenging aspects of this autobiographical story are meaningful for today and speak strongly to humanity as a whole. Now, I want to see if this author has any other creations. Thanks for writing. Don Hohmann

I liked the story a lot. Once they got to San Donato the story pivots into something I had little to no interest in.

It’s been a long time since a book grabbed me like this. I loved everything about the story and didn’t want it to end. Robs descriptive vocabulary and the audible readers’ tone made me feel like I was right there with them. I admire both Rob and Steve for making the journey and coming to terms with their heritage. Would be a great movie!