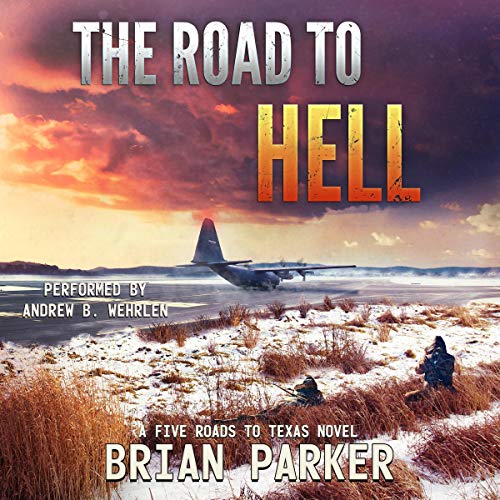 Winter has never been so hot, nor the world so dangerous.

Sidney Bannister has been lucky so far. With no survival training and no real skills besides her street smarts, she realizes that must learn to fight so she can protect her newborn baby from the infected that plague the United States.

Enemies from her former life arise to bring the AWOL Lieutenant Jake Murphy to justice. The hunt intensifies as the remnants of Jake’s old unit close in around him and his group of survivors.

In the middle of the chaos, Iranian aircraft fill the skies of Kansas, forcing the Americans to make decisions that will impact all of their lives. How much is Sidney’s small group willing to sacrifice to stay together?

Follow the action that began in the Phalanx Press collaborative novel Five Roads to Texas as the series continues to grow.

Back on track ...another good one.

Its getting hard to find a good long ZAP series an even harder to find one that is worth the listen but this series an the authors that write it are well proven so i recomend it an ive gotten through ALOT of zombie apocalypse end of the word b.s..

I love all the characters and can't wait for more.

This story makes me wait impatiently to hear how they are doing.

Andrew B. Wehrlen is one of my favorite narrators!

Very entertaining . I have purchased all of the installments in this story, and I can't wait for the next story to drop.

Such a great book!

I usually don't do zombies but I love this book and Brian Parker's work! Great job!

I love these books!We have the 'government' trying to bring Jake to 'justice'.We have a new member joining the group.There are old and new friends.It was a good read. Andrew B Wehrlen was a fine narrator.I was given this book by the narrator,author or publisher free for an honest review.

First I have to start off with saying that this book was given to me for free to read and to leave a review, this does not affect my perception nor my review of the book at all, as I am always truthful and honest in my reviews.

Brian Parker and Phalanx Press did an amazing job of orchestrating this amazing book. The book has everything in it that a reader wants. Characters we root for, characters we hate, places we want to live, and emotions we feel.

All around a great listen, I highly recommend.

Five Roads Has Everything for the Post Apoc Fan!

The Road to Hell: Sidney's Way. Five Roads to Texas Novel, Book 6. The story is written by Brian Parker and published by Phalanx Press. All the different threads and storylines from the authors in the 5 Roads Universe are really fantastic. Sidney and Jake are my favorite characters to follow. The story picks up in the winter with Jake taking the task of a formula run for baby Lincoln. This volume introduces new characters to the storyline and new problems.

The 5 Roads Universe holds the listener’s attention extremely well due to the fact that the infected not the only problem for survivors. The American survivors must deal with foreign invaders and horrible people on a daily basis just to survive. While the emergency has brought out the best in some people it has brought out the worst in others. The characters are not just cookie cutter Zom-Poc interchangeable characters that can be found in many series. The authors have created a shared universe that is growing into a truly great place.

The narration is provided by Andrew B. Wehrlen. Mr. Wehrlen brought a strong skilled vocal quality to this audio production. Once again he has delivered an excellent performance of these characters in this growing shared universe. The production quality of this audiobook is also the highest quality. I heard no problems during the entire performance. There were not any detectable flaws that I was able to hear during the entire performance such as loops, breaks, or buzzing. The production was crisp and clear. Phalanx Press delivered an excellent audiobook production. I highly recommend this audiobook. I was given this free review copy audiobook at my request and have voluntarily left this review.

Did you find this review helpful? If so, would you please take a moment and select the 'helpful' button below? Thanks so much!

The action continues in this awesome addition to the series. I would highly recommend starting with book 1 of the series because you'll get so much more out of it. That being said, I think the author provides enough detail that you can jump in and still enjoy the series at any book. All in all, if you love zombie apocalypse stories as I do, you owe it to yourself to pick this whole series up!

A worthy entry to the 5 Roads to Texas series

Story: 4/5
This book follows multiple plotlines, from a South American science facility to a young boy escaping the horror right after school ends. With every chapter you get to now more of the backstory and how the separate storylines connect to each other.
Even though this book is called Sidney's Way the story in the first three quarters revolves more around Jake Murphy. Which is definitely no problem, just something to note.

If you have read or listened to more of Five Roads Of Texas, then this book is a must have.
If you like post apocalyptic zombie stories then I would encourage you to try it out. It is nicely written and has everything you want in those kind of stories.

Narrator: 4/5
Nice narration, nothing negative worth mentioning. -1 Stars for not having multiple narrators.

The Road to Hell: Sidney's Way - A Five Roads to Texas Novel, Book 6..
This is the best post apoc series around these days. Fast and action packed - fantastic.
Highly recommend this book and the whole series so far.
I was given a free copy of this audio book at my own request, and voluntarily leave this review.