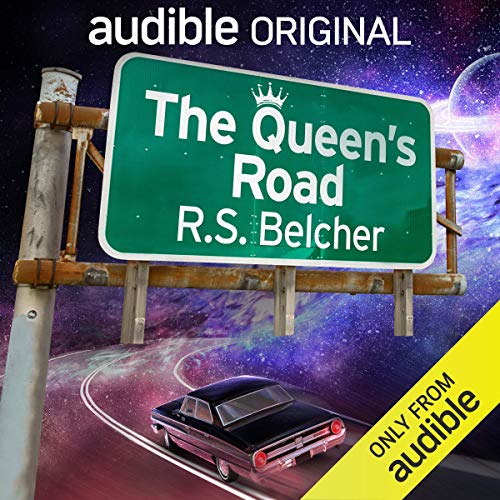 Ramon “Ray” Cosa’s life is not what he expected it to be. Living in a small Texas town ravaged by Hurricane Harvey, Ray has suffered many losses in his young life, and he has little hope left that anything will ever change or get better.

That is, until the vintage Ford Galaxie and its strange, dying owner enters Ray’s life. Given a jeweled ring he cannot remove and a desperate mission, Ray is plunged into a universe of secrets, wonders, and terrors he never dreamed exists.

Now, he travels the Queen's Road - a hyper-space highway that connects all the planets and galaxies in creation - in search of one man, one of the Queen of the Universe's Rangers. That journey will put Ray on the front lines of an eons-old cosmic war between the primal forces of order and chaos.

And probably make him late for his next shift at the Chug-n-Lug.

Hopefully the start of a new series.

The Queen's Road is a new branch of supernatural urban fantasy adventure from RS Belcher. When I saw the title, I was hoping for more Brotherhood of the Wheel and I confess I was a bit disappointed when (A) there was a different narrator and (B) it had nothing to do with BotW. I bought it anyway. I'm glad I did. Well written, interesting and the narration is excellent. You're immediately transported into Ray's world and the wonders that unfold when he travels the Queen's Road. What really carries the book though, is Ray himself. He's likable. An everyman. Humble and unassuming, he makes intelligent, gracious choices in sticky situations where he's way out of his depth. He's a tool. A pawn. He knows he's being used and manipulated, but he doesn't allow himself to be misused. Really, really nice story arc of him finding his feet and standing up for what he believes is the right thing to do. The other characters are dynamic as well. Plus there's seriously cool muscle cars, exotic locales and monsters trying to take over the universe all woven together making The Queen's Road a very entertaining story. Get it now. You won't be disappointed.

If Hitchhikers Guide and Men in Black had an illegitimate child who loved cars and working class stiffs with a heart of gold, it would be this novel. It is classic Belcher. Not deep, but heartfelt. Griffith voices a whole character case seamlessly. Great work. My only narration beef is that there is sometimes no space between transitions.

Nice premise and setup then a huge meh.

Nice characters in the setup, very Dr Who feel to the concept. whole universe opens up to the main character then nothing. felt like it was going to be great then went nowhere. characters paper thin. kid goes from working at chugalug to throwing c4 bombs and defeating a useless army of bad guys?

No clever antagonist, no clever plot. aliens taking over let's all go blow em up with a plan where all the bad guys are hapless and 7 days after working at a gas station the hero is shooting lasers or whatever.

felt like a YA book for the second half. most the female characters had the same voice, no real story beyond let's go get em! yeah we won!

such a promising setup and first 1/3 then had no ideas, no story just disney channel meets mlm Michael bay.

I really enjoyed R. S. Belcher's previous novels, but this one is seriously flawed. He spends so much time setting the stage on each planet that when the action finally happens, the reader has already left the stage. The flaw is in the conception of the novel. The characters keep travelling to new planets, but then the author has to build the world before the adventure can take place. The result is there is no space for character development. I stuck with this one for 8 hours thinking it had to get better, but I still couldn't finish it. If you don't care what happens to the characters 4/5 through the novel, there is a serious problem.

This book has some terrific points but some negatives too.

Reader (5) - Kaleo Griffith is excellent as the reader. He carried this book through some rough passages. I would consider other books he read because of the quality of his work.

Excitement (4) - This is my measure of how difficult it was for me to stop the story because I had other things to do. This varied wildly from 1 to 4. I was surprised that I rated it this high because there were times I just wanted to stop.

Comfort with characters (2) - I am not of Mexican heritage so I am making assumptions. But the characters talked like a bad Cheech and Chong movie without the humor. If these characters from my locality, I would be embarrassed. What I think was meant as machismo came off as foolish to me.

Bottom line for me. Raise the IQ on the characters. Good action did not sustain my dislike for any of them.

Belcher does it again!

What an unexpected surprise! I had put this in my wishlist because of course I was in the middle of something else. Right from the beginning, the story had me hooked. The characters are well-rounded, the story fully actualized and the plot is very clever. I found I wanted to know more about most of characters. Now don't get me wrong, this is not a criticism rather this is a compliment. As I listened to the story I repeatedly thought that I would listen to an entire book about the particular character I was wondering about. I literally could not stop listening. I'm really hoping there will be a second book because I want to know what else happens on the Queens Road.

Rather simple plot. Interesting beginning but boring later. For the pure science fiction buff. I stuck with it reluctantly.

wanted Star to have a an Australian accent. :) loved the book. a cross between Hitchhikers Guide to the Galaxy and Walker Texas Ranger. "people " are people in matter the galaxy.