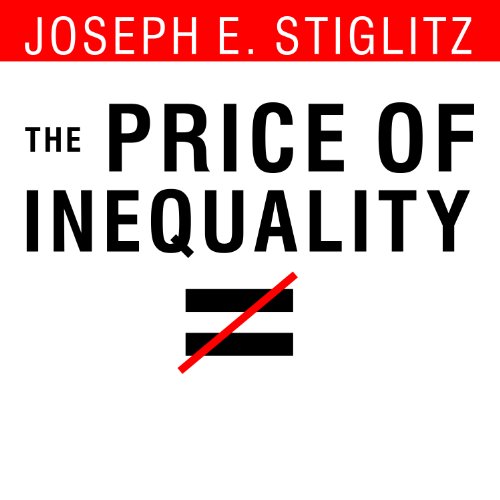 The Price of Inequality

The top 1 percent of Americans control 40 percent of the nation's wealth. And, as Joseph E. Stiglitz explains, while those at the top enjoy the best health care, education, and benefits of wealth, they fail to realize that "their fate is bound up with how the other 99 percent live."

Stiglitz draws on his deep understanding of economics to show that growing inequality is not inevitable: moneyed interests compound their wealth by stifling true, dynamic capitalism. They have made America the most unequal advanced industrial country while crippling growth, trampling on the rule of law, and undermining democracy. The result: a divided society that cannot tackle its most pressing problems. With characteristic insight, Stiglitz examines our current state, then teases out its implications for democracy, for monetary and budgetary policy, and for globalization. He closes with a plan for a more just and prosperous future.

An explosion of ideas with no depth

What disappointed you about The Price of Inequality?

I've gone through chapter 4 and can't continue. Everything felt like an extended introduction with idea after idea being thrown at you, but never explored in any detail. To make matters worse, he'd often circle back to the same idea later on and then continue to fail to expand on it a second or third time or fourth time.

What could Joseph E. Stiglitz have done to make this a more enjoyable book for you?

Flesh out his ideas. I know he's talking to regular folk, not economists, but thats no excuse for failing to expand his ideas. Yes, I get that the 1 percent rigs the system in their favor and that one of the ways they do this is regulatory capture, but maybe you can give me more than 1 sentence about it. I learned far more from a 15 minute podcast I listeneded to last year than I have any chchance of learning from this book.

What does Paul Boehmer bring to the story that you wouldn’t experience if you just read the book?

Gravitas. I felt like I was listening to someone important and worthy of my attention.

If you could play editor, what scene or scenes would you have cut from The Price of Inequality?

So far everything but the introduction. Chapters 1 through 4 did not add anything beyond what I heard right up front. No illumination or expansion of ideas. I have not read past that and don't intend to as it literally feals like a waste of my time.

I'd bought this book because I was hoping to hear about the complex relationship between government and the economy and a way to produce a system with more positive feedback loops that will dissuade abuses and help make our economy stronger. He's not going there. If you want to hear complaints, this is your guy. If you want to hear anything but one-line solutions, apparently he doesn't want to go there.

The book is extremely repetitive in highlighting the inequality problem - without adding much value or describing in depth alternatives.

Explains difference between the Chicago School and his evaluation. Very valuable. It is a good read.

Overall a great analysis. I was a little disappointed that Stiglitz didn't even address the fact that the classical model expects returns to capital and labor to be proportionate to which increases profitability. Not addressing the argument that increased productivity has been almost exclusively the result of capital investments (new software increasing capabilities, new technology increasing automation, etc.) had he addressed that I think this book would have been a lot stronger as an argument.

Would you listen to The Price of Inequality again? Why?

In one instance it cost the state $4 million to save the city $1 million. This is not a once-in-a-lifetime occurrence.

Stieglitz's main points are ones that nobody with any moral sense could deny and that can never be restated too often. The solutions he proposes may not seem the best to everyone, but most are eminently sensible, and if we look at things objectively rather from the standpoint of personal interest, we have to approve most of them. For instance, I personally prefer to leave my estate to people close to me without giving any to the government, and if it comes to a vote on the estate tax, I would vote against it out of personal interest, especially when I see the vast sums paid to banks who give obscene amounts to underserving CEOs. However, IF I could vote for all or several of Stieglitz's recommendations as a packet, I would certainly not hesitate!

Stieglitz book is a timely reminder 1. that our entire society has evolved in a deplorable direction during the past few decades and that we are heading somewhere that nobody wants to go 2. that our personal well-being is closely connected to the well-being of the society in which we live, so if that society is undermined by excessive inequality and a pernicious ideology based on selfishness, certain things that may seem to be personal sacrifice are in fact a way to save our society and ourselves. This may not be anything "new", but most of us lose sight of this in our lives. Those who reject Stieglitz's book might well ask themselves whether it is because he uncomfortably pricks their inner moral sensibility that it is more comfortable to ignore.

Do not let negative comments here keep you from reading this book with its important and well-argued message! It was not one of the books I started listening to with the most eagerness, but I was immensely happy and grateful when I did.

Yes, I agree with everything in this book. Those who are hooked on the idea of austerity and tax cuts will find it annoying and will search their hearts for ways to deny its ideas. Conformation bias is working overtime these days on both sides of the political spectrum.

It's human nature to choose winners and losers and to cheer for the winners. This is what it has come down to in our society. Unfortunately, this rather short-sighted way of approaching our world means that the winners walk away with most of the wealth.

This book is dense in places and I really need to re-rlisten when my head is not spinning with Obama vs. Romney rhetoric. Which I will do soon. But until then, suffice it to say, the ideas Stiglitz puts forth for making government an agent of economic growth are spot on, but incredibly hard to implement in this political climate. I think we need another mutual enemy now that the cold war is over and Bin Laden is dead. All we have to fight against is ourselves at the moment. And it sickens me.

One side is never enough....

There is a fundamental question about inequality this book fails to address. How much inequality is the right amount? Clearly some inequality is both unavoidable and necessary for innovation. This book seems to take the position that the amount of inequality we have now is way too much, but does not propose a goal equality level. I agree that inequality is a bit high, and is getting higher as corporations and the very rich are no longer paying a fair share mostly using loopholes. Nevertheless, I find many of the author’s proposed solutions way over the crazy line. Extending unemployment payments for long periods (do you know people holding off getting a job just in case unemployment is extended again; I do), increasing federal taxes on families earning more than $270K to 70% (history shows this will not work). Stopping investments in productivity (the author phrased it as not investing in labor saving instead invest only in resource saving). Matching the savings of the poor (such policies would be played and end up counter-productive).

It seems the author thinks poor people who were “exploited” by being given homes and a mortgages for which they should never have qualified should now get their mortgages restructured into something they can afford.

The author rages against monopoly powers and do nothing exploiters like Steve Jobs. I found these arguments very poorly supported.

My favorite line was if we follow the author’s recommendations “many more people will have a shot of one day being in the 1%”. Of course, the top 1% will always be 1%. So to increase the 1% we would need to do a 15 minutes of richness kind of deal. The author also mentions education and legal reform without stating any real proposals.

Books like this one, presumably with charts and tables, are probably better with another medium. However, if you are going to listen to it as I did, it still does a pretty good job. Economic principles are pretty clearly explained, though if it is your first introduction to economics, you will probably want to look a few things up (moral hazard, market failures etc.), but he does't bury you in a mountain of technical language.

As Stiglitz disclaims early, this is not a work for peer review. It is for popular consumption so if you are looking for some deep explanation as to how he arrived at his claims, you'll be left wanting.

I am usually frustrated with books that prescribe solutions that we "merely lack the political will," to accomplish. It seems like activist thumb-twiddling. Every book of this type seems to have a portion like that. This one is no exception. I find the repetition of this trope frustrating.

A little boring, a little dated, but still great.

morale compass for a better society