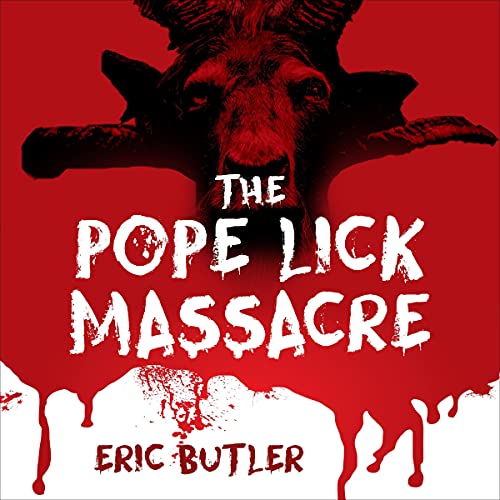 There are two types of people in Jefferson County: Those who know the legend of the Pope Lick Monster, and those who believe it. Before the night is over, Sam will have no choice but to join the believers.

Since their mother’s death, Sam’s sole focus has been taking care of her younger brother, Kenny. Now Kenny’s Scout troop is missing, having never returned from the woods around Pope Lick. Sam gathers a group of friends to search for the boys and their Scoutmaster. With each step, they get closer to discovering the scouts aren’t the only ones in the woods this night.

"The Pope Lick Massacre is a bold, brutal horror story that’ll remain in your mind long after you read it. This book is not for the faint of heart." (Independent Book Review)

I really enjoyed this Novella. Right from the beginning I was hooked. It was a exciting, hold back nothing start to finish! I will definitely be looking for more books by Eric Butler!

I breezed thru the Pope Lick Massacre in no time at all. Excellent story with well-developed characters and the perfect amount of guts and gore thrown in, but not gratuitously. There was a couple of scenes in the story that actually caught me off guard, which was a pleasant surprise, and the ending was also very unexpected. Highly recommend...

*Audiobook*
I listened to this one pretty quickly while I’ve been sick the last few days. A ginormous goatman in the woods of Kentucky is a great way to lose track of your illness!! Will the boy scout troop and the rescuers looking for them make it out alive? Read (or listen) to find out!

OMG! She nailed the Goatman's voice!

It had been some time since I've read the ebook, so when the author offered me a free Audible code, I was super excited. I did remember bits of the story, but not the minor details that Bultler adds to give his story flavor. I'm usually not a fan of creatures, but having personally grown up in the Goat Man's area and having spent a good part of my teenage years trying to hunt him down, this is one monster I enjoy reading about. The voice! OMG! The way Goat Man mimics in a child like voice!!! The narator did such an excellent job!!!