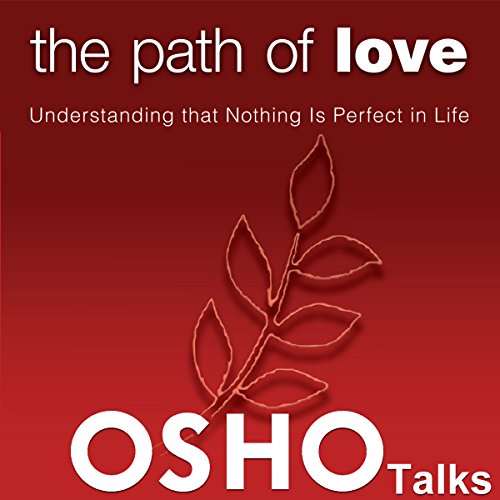 The Path of Love

Kabir is a 15th-century Indian mystic. Born a lower-caste weaver, Kabir opposed superstition, empty ritualism, and bigotry. His teachings include scathing attacks against Brahmanical pride, caste prejudice, and the very concept of untouchability and exposed the dogmatism and bigotry he perceived around him. Unusually, even for his time, he was embraced by disciples who had been raised in both Hindu and Muslim traditions, who saw in him the embodiment of a life-affirmative approach that transcended the narrow dogmas that divide people and set them against one another.

Here, Osho introduces listeners to this extraordinary mystic and his songs, bringing both to light in such a way as to show how they are both timeless and utterly relevant to our time. The path of love, as described by Osho and though the songs of Kabir, is a journey that seeks out and celebrates the divine that is hidden in the ordinary, the love that becomes not just a feeling one has but ultimately a state of being that one is.

I really enjoy the Works of OSHO. I have purchased many of the books and have been excited to have on Audible. However, both books I have purchased here, I am returning because you cannot understand him. I regret writing this review, but thought I should share.

there are so many pauses to the audio

What disappointed you about The Path of Love?

there's pauses to the audio. someone decided to remove the silences that are so very important to Osho.

Excellent discourses on the songs of Kabir. Those with the ears to hear,let them hear. Enough said.

Feel it open up your heart. Hear Krishna's flute all around. Drink deep. He's coming for you!

I had been at an underground techno club all night and didn't get back to my airbnb until 8am. Saturday morning. September 4, 2021. It was misty outside and the drugs were still pumping in my system (acid + molly). Took my clothes off, went to bed and pressed PLAY. Drifting in and out of sleep throughout the day. Heart wide open. Osho speaking to me as if he is here with me. I felt love towards everyone. And I knew I had a date that night. So this was good preparation. We had wild sex and she swallowed. Beautiful :)

Delivered by a true master. Thankyou for this. 🙏🤗❤️🦄🌈 I hope the world can come to understand what soho talks about in these talks. A new earth can then unfold.

Every Rose has its thorns

He delivers again. Silent communication from the great master doing what no one has ever done.

The flute of the infinite is played

Great and inspiring discourses given by Osho on Kabir's verses.

Osho makes emphasis on the path of the heart (the subtle path of love).

One Love❣ One Heart❣

While, I love the light of Christ, there have been many other messengers that have come here to share their light. Osho, was blessed with the gift of saying words unlike any other. Thank you, Osho and thank you Kabir🤗

As always Osho nails it

Reading and listening a lot to many spiritual, philosophic and intellectual people I have never encountered anyone putting things so neatly in order and connecting the dots for me. brilliant.