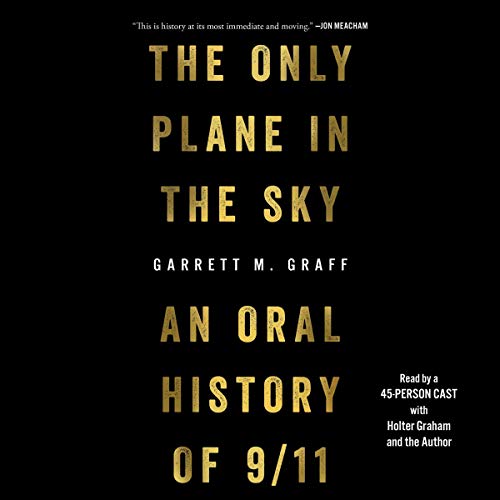 The Only Plane in the Sky

The Only Plane in the Sky

Over the last 18 years, much has been written and said about the terrorist attacks of September 11, 2001 and the profound impact they had on America and the world. But those names, stories, and memories have never before been collected in one place to tell the full, 360-degree story of what happened that day and in the days after.

In The Only Plane in the Sky, award-winning journalist and author Garrett Graff draws on never-before-published transcripts, recently declassified documents, and original interviews and stories from nearly 500 government officials, first responders, witnesses, survivors, friends, and family members to paint the most comprehensive, minute-by-minute account of the September 11 attacks yet, all told in the words of those who experienced that dramatic and tragic day. From the firefighters who streamed into the smoke-filled stairwells of the Twin Towers to the fighter pilots scrambled from air bases across the Northeast with orders to shoot down any hijacked commercial aircraft; from the teachers who held their fear at bay while evacuating terrified children from schools mere blocks from the World Trade Center; to the stricken family members trapped helplessly on the ground, hearing their loved ones’ final words from aboard a hijacked plane or within a burning building, Graff weaves together the unforgettable testimonies of the men and women who found themselves caught at the center of an unprecedented human drama. The result is a unique, profound, and searing exploration of humanity on a day that changed the course of history and all of our lives.

"The Only Plane in the Sky: An Oral History of 9/11 is a book exquisitely suited to audio format, a detailed cataloging of hundreds of personal stories, read by actors and culled from 5,000 oral histories conducted and archived around the country.... We hear from first responders, office workers in the twin towers, people traumatized by witnessing falling bodies.... Unlike many works of history, The Only Plane in the Sky, a mountain of indelible anecdotes, does not feel like a novel. It feels, instead, like dozens that ought to be written." (The New York Times Book Review)

What a heartbreaking yet uplifting story. It brought back all the anger and pain of that day. An unusual listen yet I liked it. It didn’t take me long to figure out I needed to have tissues on hand for every listening session. My wife asked me “why listen to a book that makes you cry every time you listen to it?” My reply, “because I need to hear it.”

This book is excellent. However, there were many moments when I needed to stop reading and collect myself. It is very emotional at times and extremely sad. It contains voices that remind one how cruel people can be (the perpetrators) but also how kind, thoughtful and resilient people are at their best. It is a testament to the human spirit but it is also extremely dark at times, as people describe the horrible impact that day had on their lives, and how 9/11 resonates down through the years.

This should be required listening

This book should be required listening for all high school and college students and politicians.
It is one of the hardest books I have listened to, due to the emotions of the people telling in their own voices the events of that day. The book itself is extremely well done. It flows very well. I have learned much from this book. I also have used many Kleenex during it.
I watched this event happen via computer video and TV. I am in awe of the bravery of those that experienced it in person.
Thank you for this book.
After listening, no one will ever forget 9-11-01.

I only listen for short periods of time. I hope anyone reading the book will consider listening to the Audible edition. It accurately reflects the utter chaos on Capitol Hill. And the horror of smelling the Pentagon burn while trapped in gridlocked traffic.

Brilliantly written, honored all the victims and heroes of 911. The narration is perfect throughout. The detail of the tragedy is very extensive and well laid out. No matter how much TV coverage you may have watched of 911 this book will enlighten you to the real horrors and miracles that took place that day.

It was a privilege to have listened to this

It can’t be understated how remarkable this undertaking was and how valuable it could be to the historical record. I can’t think of a corollary artifact for any other milestone event in history, and certainly none that focuses so acutely and vividly on the experiences of the people involved.

If you’re interested from a production standpoint, it’s excellent. The performances were incredible, as is the flow, divisions, and pacing of the narrative.

Thank you to all involved.

I got this expecting to cry through the entire thing. Instead, I listened with respect and love. To fully understand 9/11 past the facts and figures, one needs to understand the humanity. This book helps with that. It was worth the purchase despite the fact that I generally prefer fantasy fiction.

Add this book to the top of your reading list

I'm not eloquent ...and can't capture my thoughts and emotions in such a way that will captivate you and inspire you to listen to this book. But you simply must. And you MUST listen. If there was ever a book that was designed to be listened to instead of read, it is this oral history. WE. MUST. NEVER. FORGET.

This is a must listen book

This is an awesome piece of work. To hear all the accounts put end to end is really amazing. I think this is perhaps the most moving literary work that I’ve heard on the topic of 9/11.

EVERYONE needs to listen