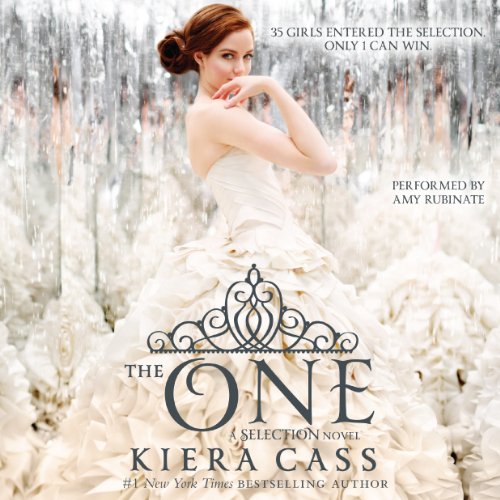 The time has come for one winner to be crowned.

When she was chosen to compete in the Selection, America never dreamed she would find herself anywhere close to the crown - or to Prince Maxon's heart. But as the end of the competition approaches, and the threats outside the palace walls grow more vicious, America realizes just how much she stands to lose - and how hard she'll have to fight for the future she wants.

The Series Just Gets Worse

By the final book, the suspension of disbelief (that America could be so dumb) snaps. It feels like Cass was just scrambling around for excuses to keep the selection going. so you're treated to an obnoxious, pointless internal angst-fest.
Rubinate's breathy, ultra dramatic narration took some patience for the first two books, but with more immature material in the third book, it became almost unbearable.

If you haven't started the series yet, save yourself the irritation and skip it.

I don’t know what it is about this series but I was hooked from book 1. This is definitely one of my guilty pleasures. The final installment of "The Selection" may have been predictable but I so enjoyed the journey. Kiera Cass is a very talented author and I look forward to more of her books.
This was a credit-worthy, 5 star listen. Good story, great narration and that cover art is perfection!

The kind of series that makes you wonder why you wasted so much time reading it. Each book became stupider and by the end you really can't help but wonder why the author thinks you should care about any of it. Save yourself the agony of this one, I wish I had.

I've been DYING to read this One (pun intended)

I thoroughly enjoyed this series. I cannot exactly place my finger on why it is so addicting, but it is. I tried explaining to my skeptical friend why she should read this series. It went something like, "It's a dystopian romance with a caste system. It's sort of like the bachelor. Trust me, it's great." She was hesitant, but she became addicted to it too.

My first comment is that I really believe this book would have been better as a two-book series. The second book was a waste of time/money. It could have been easily condensed into this book. OR if they wanted to keep three books, then focus more on the rebels in this one. The actions scenes were too rushed.

But who cares about that when there's romance?! Maxon and America were precious. It got a little frustrating there when the same-old crap kept coming up. America: I just can't commit myself to someone dating other girls. Maxon: I just can't commit to you when I think you love someone else. We get it. We got it in the first book. Let's move on from it, please.

Will this series go down as life-changing? No. It probably won't even make my Top Ten Series list. That being said, it does its job: It is an entertaining listen that allows me to escape for a few hours.

I felt like there were a lot of unnecessary deaths. There was only one death that needed to happen. No one else needed to die for the story to progress. America could have had some other reason to leave the castle in order for Max to realize his feels for her.

Also, Chris is a rebel?! Why wasn't this developed?! It could have been an epic plot twist. Why did Chris not realize that America was on the rebels' sides when she brought Georgia to the dinner? Would have made things more interesting.

Loved the series, this book and the ending!

STORY (young adult romance) - This is Book 3 in The Selection series. "The Selection" starts with a bunch of girls (maybe 25) competing for the heart of Prince Maxon. In "The Elite" the field is narrowed to a handful, and finally the winner is announced in "The One." This series has been such a fun escape that I hate to see it end but, at the same time, I don't think I could have waited any longer. It's not deep high-quality literature. It's a short, easy listen that will make you feel good. The story is set in a dystopian future society and combines elements of the fairy tale Cinderella with the TV show The Bachelor. There's catty young girls, a dreamy prince, a juicy love triangle, sweet romance...and a wonderful ending.

PERFORMANCE - Amy Rubinate has a distinct voice and reading style. The only word that comes to mind is "smoky," but that's a poor description. I didn't like her performance for about the first hour of the first book but have thought it was perfect ever since.

OVERALL - There's no cursing or sex, though there's one scene with some hasty clothing removal that comes close. You should absolutely listen to the series from the beginning. Yes, it's a fairly immature fairy tale, but you will probably love it as I did. Recommended for teenagers as well as older women who are young at heart.

What made the experience of listening to The One the most enjoyable?

This is one of those swoon worthy stories that you find yourself wanting to shout at the characters sometimes, and smile all at the same time. There are so many emotional ups and downs in this story.

Absolutely. I couldn't in a million years turn it off. I had to rush to the end.

This is a series you will want to read. If you liked Twilight or the Hunger Games then The Selection series is a must read. The One, the last book in the series really wraps it up well.

A Romance Read By An Automaton?

Although I really like the story concept written by Kiera Cass, I found it difficult to listen to the nearly robotic sounding narration. Mostly intoned in a raspy whisper, I often had to leave the story to get a break from the monotony. I am certain that this narrator is talented as a voice actor, but her voice just does not suit the characters of this series. There is so little inflection during critical moments of the story that the main character seems somewhat bored with what is happening around her. I don't know if I will purchase the next installment in print or on Audible. I think the voices in my head could do a much better job. I'm disappointed in the three performances I've heard so far in this series. Perhaps this narrator is better suited to other stories which could be read with less emotion: non fiction might be a good fit. She reads clearly, just not expressively. Not her fault, just not a good voice match for the action & tone of these stories.

What disappointed you about The One?

If I can easily stop listening or if I feel like I need a break from listening, that's a bad sign. I think the biggest issue for me was that I could never connect with America or really care about what happened to her. And the same goes for Maxon. I disliked the guy half the time because he seemed like such a player. On the previous book in the series, America's feelings for Aspen and Maxon are all over the place. And on this book, she just makes her decision out of thin air, and throws it in your face like it's just a fact for you to accept. To me, the love between Aspen and America in the first book was so much more developed, and so much more genuine than her love for Maxon. The whole thing, the characters and the story, have this cookie cutter feel to it that makes it hard to keep on listening. The book did not get interesting until the last few chapters.

Would you ever listen to anything by Kiera Cass again?

Her first book in the series was actually very decent, so yes I would give it a try.

Three words: Melodramatic, robotic seducer. Seriously. What the hell? Part of the reason why I had such a hard time listening to the book was because of the narrator.

What character would you cut from The One?

Hmmm...I don't think I would cut characters, more like enrich them and make them more complex and endearing.

This book had so much potential and could have been a thousand times better. I'm not saying it's the worst thing I've ever read. It's just disappointing.

Well worth the read

Where does The One rank among all the audiobooks you’ve listened to so far?

This book is the conclusion of a trilogy, I definitely suggest you read all 3 or it won't make sense. (I picked up the other 2 from my library). I'm a huge romance fan and I appreciated the innocence of young love without profanity or explicit sex scenes. It's suitable for teens as well as incurable romantics of all ages.

Others have focused on the romance of this book, but there is a strong sub plot which really is the foundation of the story. There is a reason that the heroine's name is America. The book takes place post World War IV in the land of Illia formerly the United States of China; which had conquered the USA because of our debt to China. With chilling references to burned history books and a cast system that has replaced our freedom, Illea is now ruled by a rather tyrannical King. The northern rebels fight to regain some of what's been lost. The setting appears to be nothing more than fantasy, but has happened before in history, and could happen again. I particularly liked Aspen, the heroine's first love, who shows amazing devotion and love for America, loyalty to the king, and commitment to helping the rebels.

The series does not resolve until the end of this trilogy, "The One". The ending is surprising, and very satisfying. I wish they would have developed the scenes after the last battle a little more, but it ends with America choosing the right man and heading off into what promises to be a loving, but not necessarily happily ever after. Even after this story ends, there is plenty of room for how this close knit group of friends lives, loves, and fights. I'm hoping to see more books in a second series.

I was very happy at the conclusion of the book, because America definitely had to work for it ! the ride continues with the cat and mouse emotional play with Aspen and Prince Maxon. America is only still in the selection by her and Max defying the King in any way they can and she grows closer to Max, but her past relationship with her personal guard weighs on her. What is one low caste girl to do? Get the book to find out. I think you'll be satisfied in the Selection Trilogy , because I was!

wonderfully read with a lot of emotion ..loved it.

will defunately listern to it again . Loved listenibg to it and I will recomment it to my friends