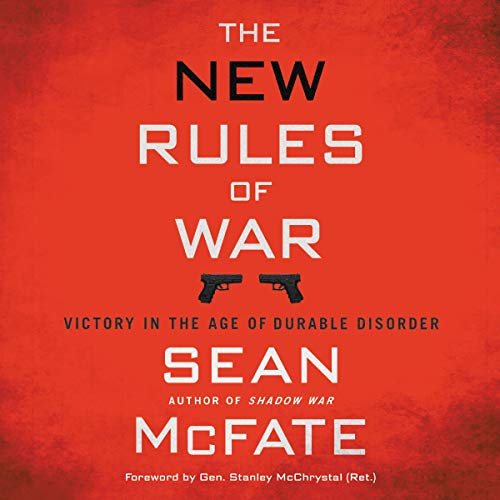 The New Rules of War

The New Rules of War

An urgent, fascinating exploration of warfare - past, present, and future - and what we must do if we want to win today from an 82nd Airborne veteran, former private military contractor, and professor of war studies at the National Defense University.

War is timeless. Some things change - weapons, tactics, technology, leadership, objectives - but our desire to go into battle does not. We are living in the age of durable disorder - a period of unrest created by numerous factors: China’s rise, Russia’s resurgence, America’s retreat, global terrorism, international criminal empires, climate change, dwindling natural resources, and bloody civil wars. Sean McFate has been on the front lines of deep state conflicts and has studied and taught the history and practice of war. He’s seen firsthand the horrors of battle and understands the depth and complexity of the current global military situation.

This devastating turmoil has given rise to difficult questions. What is the future of war? How can we survive? If Americans are drawn into major armed conflict, can we win? McFate calls upon the legends of military study Carl von Clausewitz, Sun Tzu, and others, as well as his own experience, and carefully constructs the new rules for the future of military engagement, the ways we can fight and win in an age of entropy: one where corporations, mercenaries, and rogue states have more power and "nation states" have less. With examples from the Roman conquest, World War II, Vietnam, Afghanistan, and others, he tackles the differences between conventional and future war, the danger in believing technology will save us, the genuine leverage of psychological and "shadow" warfare, and much more. McFate’s new rules distill the essence of war today, describing what it is in the real world, not what we believe or wish it to be.

Some of these principles are ancient, others are new, but all will permanently shape war now and in the future. By following them, he argues, we can prevail. But if we do not, terrorists, rogue states, and others who do not fight conventionally will succeed - and rule the world.

This book brings to light a domain of our world that is too often overlooked now a days, which leads to a relative stagnation of growth, perfectly highlighted in the book.
I wish this book was read by many as I agree that change is needed to western view on war, and I am worried that this call for change is already too late to avoid harsh repercussions.

Mr McFate reminds us there isn't much new under the sun, especially when it comes to warfare. In this controversial book, the importance of juggernaut, modern institutions are questioned and a new theory of future conflict is introduced that sounds oddly similar to those of yesteryear. Just summed up in ten tidy rules. No matter your stance, ultimately the author paints a picture of what COULD be the future of warfare and forces the reader to consider his validity and question modern paradigms. Thought will be achieved.

If the reader can get past the author's ego, there are some very salient points in this book. Highlights:

1. Western powers look at War as binary: either we are at war or we aren't.
2. With that binary outlook, western powers adhere to the Laws of War (large, defined force-on-force, defined endstate).
3. Other countries are running circles around the US, using non-conventional forces and methods to get to their own undeclared end states.
4. Best example: Russia, with its annexation of Crimea and continuing (denied) battle for Ukraine.

Conclusion: No bad guy wants to go toe-to-toe in all-out War with the US, so they find ways around our policies, doctrines, and weapons systems. YES, Sean McFate has some very good points here.

This was an interesting book. I really enjoyed it. well structured as well. thank you

Just as good as his lectures!

I've had the privilege of hearing MCFate lecture at NDU. All aspiring and current military officers, government Contractors and government employees should read this book and consider how you will operate in accordance to these new rules.

Great assessment and thoughts on the global state of conflict complete with recommendations for the way ahead. Left me wanting more discussion and in depth knowledge.

Move this to the top of your reading list!

This book is thought provoking. The ideas are well presented and intriguing. The author's arguments are timely and extremely relevant!

Reminiscent of Robert Greene books on strategy and warfare with contemporary and nuanced examples today. Almost a prediction of the future. I will be listening again.

The author laid out our old-world thinking, and antiquated strategies and gave us new ways forward .

I started this book with some skepticism but by the end realized how important these lessons are for our country. Politicians must start educating the public if we are to survive and thrive in the future. I highly recommend this book for the history it tells, the lessons we’ve learned/not learned and the importance of creative thinking. I will listen to this book again.

This is a brilliant work that needs to be in the hands of citizens, journalists, leaders and politicians. McFate explains why we are trapped in quagmires born out of the collective failure of imagination among US defense leadership. With Chomsky-esque clarity and logic, McFate helps us see the trends and strategies we should have noticed decades ago. CC: potus candidates.