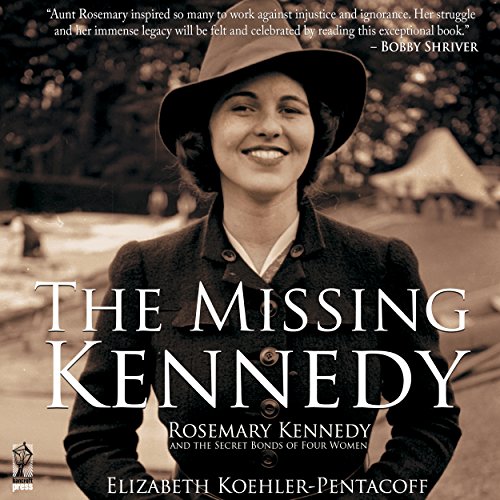 Throughout her childhood, Elizabeth Koehler-Pentacoff frequently visited Rosemary Kennedy, President John F. Kennedy's sister. Why? Koehler-Pentacoff's aunt, Sister Paulus Koehler, a Franciscan nun, was Rosemary's devoted caregiver at St. Coletta in Jefferson, Wisconsin, for 15 years and her driver and travel companion for over 30. The resulting audiobook, which will be will be the first about this mysterious Kennedy, chronicles Rosie's life along with that of the author's aunt, and delves into the similarities between the two families. It includes Kennedy quotes from the author's interviews and anecdotes about Rosemary and her famous family.

The book delves into Rosemary's misdiagnosed condition, why her father sought an experimental brain surgery for her without his wife's knowledge, how he kept this fact hidden from the rest of his family for 20 years, and what Rosemary was actually like after her lobotomy. And it will show how Rosemary was the catalyst behind the Special Olympics and related legislation from 1960 to the present.

The Kennedys considered the author's aunt to be a member of their family. Through the author's relationship with Rosemary, Sister Paulus, and her other relatives, the author discovered how family, faith, and silence intertwine to strengthen or destroy our relationships, no matter our status or circumstance in life, whether one comes from in a rich, extraordinary family or a poor, ordinary one.

Not really about Rosemary, but about the nun and her family.

This book has small dusted stories about Rosemary Kennedy. This book is its whole is about the nun who took care of Rosemary. Her life on the family farm, how she told her mother she wanted to be a nun. How her life was in cloisters and and the various communities she served within. Here and there there are small glimpses into Rosemary, but placing her name and likeness on the cover was just a plain sales tactic a true bait and switch tactic.

This book was incredibly disappointing and that it was marketed in this way is just a bait and switch on the consumer.

Most Annoying Narrator Ever

The subject matter of the book would be pretty good if I didn't have to listen to the most annoying narrator in the history of time. This is the story of a nun from Wisconsin, her niece, and Rosemary Kennedy from Boston. Audible, can you find a narrator who doesn't sound exactly like the perfect stereotype of those who discriminated against the Irish immigrants? Can you find a narrator who can at least pronounce the Wisconsin town that figures prominently in the book - Oconomowoc? Because this narrator butchers it over and over and over and over. Ugh.

What disappointed you about The Missing Kennedy?

This book was more about the authors family and story and very little about Rosemary Kennedy. If you took out the authors story this would have been a short story - maybe 3 pages long!

Has The Missing Kennedy turned you off from other books in this genre?

The author has turned a story about a tragic young woman's life into a soapbox for her own political leanings thereby polarizing the reader.

Thank you for bringing awareness to the way people with special needs were treated. But the narrater was monotone.

great read I would suggest it as required

this should be required reading for high school nationally. it tells more than I can describe

This book was a total misrepresentation. I would never have purchased a book about a stranger's family. The book has little to no information about Rosemary Kennedy and definitely no new information. It was 75% about the author's family and experiences.