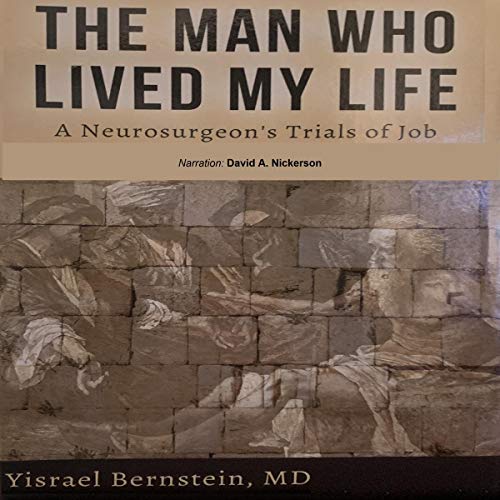 The Man Who Lived My Life

In this compelling memoir, neurosurgeon Ronald (Yisrael) Bernstein was raised as an orthodox Jew by loving parents in the suburbs of Chicago. He went from the hallowed halls of the University of Chicago during the Viet Nam war era to a neurosurgical residency and professorship at Northwestern University. Eventually he settled in the Southwest where he had a thriving medical practice and became the owner of a hospital. In his climb to prestige and riches, Dr. Bernstein accumulated the American dream: an attractive wife, three beautiful children, exotic cars, and a mansion by the time he was 50 years old.

But only a few short years later everything came crashing down when he was falsely accused of malpractice in a widely publicized lawsuit. Although the case was eventually settled out of court, the damage was done. That was the final impetus to permanently move to Israel. He was supposed to be in Haifa living in a comfortable condominium overlooking the Mediterranean Sea, but more than $4 million worth of his possessions were stolen by the moving company, including a concert grand player piano and a Ferrari.

Dr. Bernstein was destitute and living in the cramped office of a private airport hangar with only his dog and an air mattress purchased from Walmart. This theft was the last act in a gigantic plummet he endured. Altogether he lost so much more than his wealth and possessions. He lost his marriage, his relationship with his daughter, his health, and his career.

Although The Man Who Lived My Life embeds Jewish traditions in its storytelling, it is not meant to be a religious book. Rather, it is a human story told by a Jewish man. It is a story for those who have loved and lost, those who need encouragement when confronting overwhelming misfortune. It's an inspirational story, and like the hero in the Book of Job, Yisrael Bernstein, as he now goes by, emerges triumphant and joyous after years of darkness and despair.