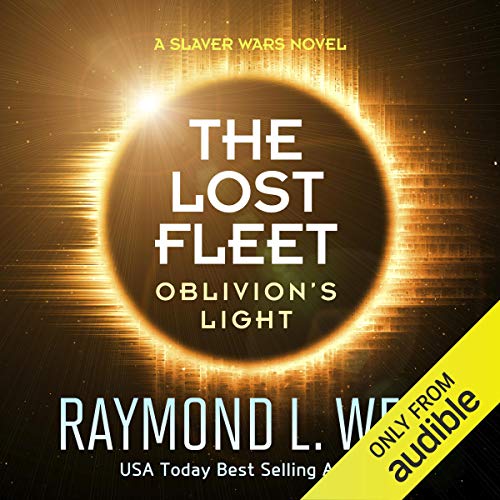 Two more years have passed for the Lost Fleets trapped in the Triangulum Galaxy. It's becoming more apparent with each passing day that the Dyson Sphere of the Simulins must be destroyed if Fleet Admiral Jeremy Strong and his people want to survive.

Rear Admiral Kathryn Barnes sets out on a mission of discovery seeking allies against the Simulins. What she finds threatens to increase the conflict between the Lost Fleets and the Simulins to a whole new level. Can she make it safely back to Gaia with her discovery, which could change the entire war in the Lost Fleets favor?

Admiral Race Tolsen is assigned a new mission in the home galaxy. Simulin ships have been detected in Shari space, and the Federation needs to know why. Race is sent to the Shari Empire with the knowledge that if his small task force is discovered, it could lead to a new galactic war.

I enjoined the entire slaver wars series, can't wait for the next one. nicely narated

This quite average installment of a totally typical space opera is absolutely ruined by the inflexion choices made in the audible narration. The voice over choices are a combination of Brian from Family Guy and the cast of the Smurf Village. just awful. please make it stop!

This addition to the saga was a wonderful ride from beginning to end, it addressed a problem I felt the series had for a very long time, it not only continued with exciting space battles, but it made exploration and discovery exciting. That was a huge bonus to the military sci-fi elements of the story.

I also loved how the characters were able to come to the rescue like old school cavalry and had a few fights that were decidedly not fair (I'm not a fan of a fair fight,), it was nice to read some uncontested wins, but for those who want the struggle, don't worry, plenty of that there. I don't think you can have a military sci-fi story without the struggle of some kind and this story does not fail in that respect.

The stakes are as high as ever and the book ends on a truly epic note.

When is the next book. This series always wanting more. A new AI in story and I hope we can get back the AI we lost. Keep them coming.