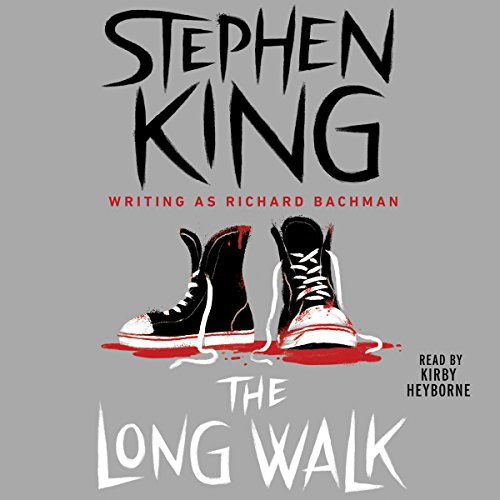 In this number-one national best seller, "master storyteller" (Houston Chronicle) Stephen King, writing as Richard Bachman, tells the tale of the contestants of a grueling walking competition where there can beonly one winner - the one who survives.

In the near future, when America has become a police state, 100 boys are selected to enter an annual contest where the winner will be awarded whatever he wants for the rest of his life. Among them is 16-year-old Ray Garraty, and he knows the rules - keep a steady walking pace of four miles per hour without stopping. Three warnings and you're out - permanently.

With an introduction by Stephen King on "The Importance of Being Bachman".

The narrator inflicts the pain and plodding nature of this story, and drags you along the path relentlessly s the characters in the story.
The only issue is that every so often, a sentence will hard cut off, it takes you out of the moment and makes it difficult to follow.

Wish they would fix the editing

I LOVE this book. I had never read this particular King/Bachman book and decided to try it out. I have now listened to it 8 or 10 times. The only issue is that the editing department got a little too excited and cut off sentences too soon. You can still understand the book and the meaning but it does mess with the flow of the character's conversations and the "reader"/listener's concentration.

Don’t be put off by the audio glitches!

I was initially put off from checking this out from other reviews bemoaning the audio editing of this book. Sure there are some sentences where the last syllable is chopped off - it happens maybe 50 times. Sounds like a lot but it never got in the way of the story for me, and I’m really glad I dived in regardless.

This book clearly came from the same place in Bachman’s brain as The Running Man. It’s set around a sort of Battle Royale / Hunger games scenario that’s stripped back to a super basic core - walking. Non stop walking.

It would be hard for most authors to take something so basic and make it enjoyable for so long, but not King / Bachman. Here he does what he does best and brings us troubled characters with stories to tell up against grim odds. I heartily recommend you go along for the walk!

The book cuts or skips out at certain points which is mildly infuriating. Great listen though.

Before the Hunger Games there was ...

I have recommended this book. Written years before all the dystopian teen sacrifice stories, this one rules them all.

Garrety of course but also McVrees is the typical tragic hero.

No one particular scene stood out but the story still haunts me.

If you could rename The Long Walk, what would you call it?

Love the Book, but it needs a polish

The book is probably my favorite of the Bachman books, but this particular version has some very choppy audio editing that buries sentences, runs through pauses, and sometimes cuts out entire phrases.

Fix those issues and my review score would go up.

Words seem to get cut off half way, hard to tell if there was more that was supposed to be said.

I really loved the story. The narrator did a good job too, but there are moments in the audio where the sentences appear to be clipped off. I can't tell if this means I ended up missing a sentence or two or if it's just a glitch. But, unfortunately, it kept taking me out of the story.

A MOMENT LATER, A RED HEADED BOY'S FACE WAS BLOWN AWAY
A Good book, written by a great author. I am in agreement with several of my fellow reviewers: Beverly- Who would have thought kids walking would make such a good story. I am always amazed in how King takes so little and does so much with it. A woman tied in her bed, a man stuck in bed and being tortured by a crazy lady, a girl lost in the woods etc... King is the expert at building characters. I have said it one hundred times, King's books are so scary because we get to know the characters and care what happens to them. Khadeejah- Story was intense. Mostly towards the end, these kids are in so much pain, physically and mentally and the writing is intense, which leads to Dustin- My feet still hurt. I felt I was on the walk, I felt tired, physically and mentally, I was worried I would get three warnings. I also agree with Jenna- Want to know more about the state. The United States these boys live in, is not very well explained. A police state is hinted at, but no world building is done here. Course, I hark back to character development, King rarely builds universes he seems to like us to use our imaginations to come up with what we think.

I liked the book and it pulled at my heart strings.

This is the fourth read. I love this story, but it is sad in many areas. Stephen King rulz!

Scary in a weird way

It was a weird weird scary feeling throughout the entire book.
It's not for everyone, but people who like scary thing, give it a try.