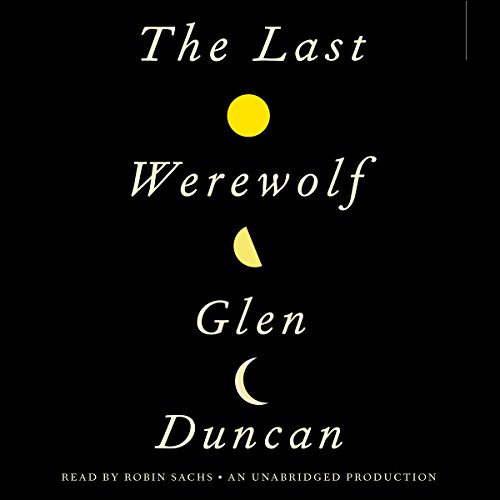 Then she opened her mouth to scream - and recognised me. It was what I’d been waiting for. She froze. She looked into my eyes. She said, “It’s you.”

Meet Jake. A bit on the elderly side (he turns 201 in March), but you’d never suspect it. Nonstop sex and exercise will do that for you - and a diet with lots of animal protein. Jake is a werewolf, and after the unfortunate and violent death of his one contemporary, he is now the last of his species. Although he is physically healthy, Jake is deeply distraught and lonely.

Jake’s depression has carried him to the point where he is actually contemplating suicide - even if it means terminating a legend thousands of years old. It would seem to be easy enough for him to end everything. But for very different reasons there are two dangerous groups pursuing him who will stop at nothing to keep him alive.

Here is a powerful, definitive new version of the werewolf legend - mesmerising and incredibly sexy. In Jake, Glen Duncan has given us a werewolf for the 21st century - a man whose deeds can only be described as monstrous but who is in some magical way deeply human.

One of the most original, audacious, and terrifying novels in years.

“A brilliantly original thriller, a love story, a witty treatise on male (and female) urges, even an existential musing on what it is to be human. Get one for yourself and one for the Twilight fan in your life.” (James Medd, The Word , UK)
“Space should be cleared for this violent, sexy thriller... The answer to Twilight that adults have been waiting for.” (Courtney Jones, Booklist)
“Yes, there are vampires here... But don’t give this book to Twilight groupies; the frank tone, dark wit, and elegant, sophisticated language will likely do them in... smart, original, and completely absorbing. Highly recommended.” (Barbara Hoffert, Library Journal)

The Ennui of a Naughty Dog

No pretty pony sparkles or virtuous animated corpses here! Rather, a 200 yr. old, sophisticated and philosophical lycanthrope, his glass of scotch, his cigarette, his journal, and the lunar cycle. Our man-wolf Jake matter of factly dismisses the ugly business of a werewolf's dietary needs, and insouciantly describes his sexual habits like National Geopgraphic doing Debbie Does Dallas. What you get is an adult, smart, hilarious, thriller that treats the old-guard monsters with the respect and fear they deserve! Raunchy? Absolutely! Goodness, I blushed... Then I watched my very distinguished Old English bulldog and realized that his narration of his persuit of a noble dog's life would probably read much like impulse-driven Jake's journal. I would accuse Sir Louie of being rudimentary--but never being crude or vulgar. Ethologically speaking, Jake is nonchalant--but he is no licentious lycanthrope! Great to read a very well written, clever "monster" book for adults, and the narration is an absolute treat.

Werewolves like to have sex. Oops I just spoiled the book for you! Seriously, that's all it is. Sex, sex, sex. The "C" words get a lot of use, I've never heard "Male Rooster" so often in such a short time, as well as the "C bomb". Seriously, one or the other would be on every single page of the physical book, I'm willing to bet.

When it got to the point of likening a woman's area to "a feverish baby's mouth" I stopped listening. Like that's an image I want, a male roster and a baby's mouth... That was right at the point it was starting to get into bestiality, so I'm pretty happy with where I stopped. I should've figured it out at the beginning when they mentioned a granddad getting aroused when the grand kids were on his knee. I had a "What the?" moment when I heard that, but the story was interesting at that stage and the reference was fleeting so I forgot about it quickly.

The story line is interesting (for as much of it as there is, think 10% plot/90% dirty novel), the last werewolf deciding whether or not to live or die. There's a hook about the origin of werewolves, but I really couldn't keep listening to it. It would probably turn out to be something like dogs having sex with dead humans, or humans having sex with dead dogs.

If you are into furry-fantasties maybe this'll do it for you. It was one huge Ick-factor for me though.

On a positive the narrator had an excellent voice and did a great job. I'll be looking out for more by him.

Oh, and as far as graphic violence - there isn't a lot, so if you're squeamish about that sort of thing don't worry. He likes to use the word "gobbet" but it's rarely about violence...

Overall I really enjoyed the story of Jake, the werewolf. He takes you through his life as a werewolf and explains how he is just so tired of it all. You can almost feel sympathy for him. He has been around for about 200 years and ‘been there, done that’ is all he feels is left for him.

There are folks that know about werewolves and like to hunt them down. Jake and his human familiar live for as long as they can in one place, always on the lookout and ready to run if Jake is found by the hunters. Now after 200 years, he is tied of running and thinks it might just be better if he lets the hunters find him.

The men hunting Jake know he is the last werewolf and want to make the hunt something spectacular, so they don’t want Jake to just give up and let himself be captured. But how do you motivate a 200 year old werewolf?

The one big drawback for me was the descriptions of sex in this story. I listen to a lot of paranormal romance stories and have heard sex described in many ways, but I wasn’t ready for the short, crass descriptions of sex with Jake. Sure 200 years probably makes the act itself tedious and redundant, but still.

The Narration Review
Robin Sachs sounds a bit like Vincent Price. He had the perfect voice for Jake, who I pictured as an English aristocrat. I will look forward to hearing him again!

This is graphic and violent but incredibly written, british flavor. I just loved this book and the narration was fantastic.

Five-star literature in all aspects...engaging, sophisticated concept, superb writing, spot-on narration which I found character and pitch-perfect throughout. It is quite visceral and carnal (and in more than only a sexual sense) so you just need to be aware that's what you're choosing. "Jake", the main character, is almost as if James Bond had a Lupine, high-functioning AA-dropout brother who possessed sharp intelligence and wry wit but hadn't been handed all the gadgets to aid in his conflicted quest for...survival? That's really all you need to know!

Finally! A horror novel for adults!

Ever since the rise of the Harry Potter books, the fantasy genre has been overrun by "Young Adult" books. Personally, I am sick to death of angst ridden teenagers, coming of age, and rising hero stories. Really. I'm a grown-up. No matter how popular the book is, if the main character is under legal drinking age, I'm probably not interested.

So when "Books on the Nightstand" featured this book, I couldn't wait for Audible to get it. Glen Duncan is an amazing writer. This is a book about growing old, finding love and a reason to live, and the pain of loss. There is mystery and intrigue, betrayal and alliance. Oh, and there are werewolves, vampires and lots and lots of sex.

Great story - but not for amateurs

If you love Twilight or the adventures of Sookie Stackhouse, this story is probably not for you. It is also quite a step beyond Monsterhunter International (which, BTW, I also loved).

However, this story, certainly gets your attention. It is dark, gory, and fatalistic. And the narator is amazing, once you get into it.

I really enjoyed this book and look forward to another one if/when it comes out. The narrator was fantastic.

Finally, the Return of the Werewolf

Can a book be both literary and genre? Yes. Can it be both successfully? Yes, see: The Last Werewolf.

I originally heard about this book via an NPR review and it languished on my to-read list for a long while until, when in need of my next book, I reviewed the synopses of the books on my to-read list. This one finally had it's turn to be what I was in the mood for. I loved it from the word go. The Last Werewolf was, for me, a perfect fit between what I was in the mood for and what the book (and the wonderful reader since I listened to this one) delivered. Beginning this book was like slipping into a warm bath mood-lit by aromatherapy candles, perfectly steeped cup of tea in hand. Or whatever your perfect scenario might be. I'll admit that my tranquil depiction makes for a strange juxtaposition with the violence and gore of the book, but such was my satisfaction with starting The Last Werewolf.

For starters, Jake Marlowe is a werewolf. And,I don't mean a Twilight werewolf, running around with no shirt, well-oiled muscles glistening in the sunlight kind of werewolf. He is an ancient, pragmatic, animalistic, savage monster who has no delusions that he is anything else. Glen Duncan wrests the werewolf from the teeny-boppers and the romance novels, and successfully returns him to the horror category. It is Jake's acceptance that he is an evil monster that makes him so unnerving: he is neither an unthinking beast (quite the contrary in fact, since the whole book is filled with his musing and ennui) nor is he in denial of the monstrosity of his true nature. In fact, the frank tone with which Jake describes killing and sex add to the discomfort.

The potential reader should be aware that this book is graphic. I blushed more than once. There is sex in this book, but it is not the sex of romance novels; there are no corsets, or 'throbbing members' here. There are, however, multiple mentions of the c-word. Be forewarned.

I enjoyed this book. It is dark, but not because of the werewolf angle. The emotional landscape of the book make the werewolf a compelling character. I wanted to know what would happen to him. The story is interesting and takes turns I was not expecting. Definitely not just for fantasy fans.