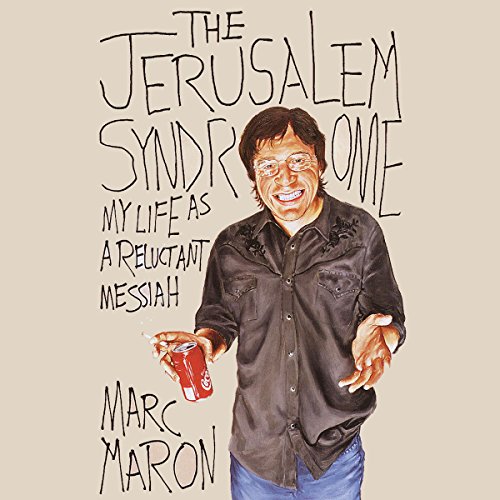 The Gospel according to Maron: a spiritual memoir of your average hyperintelligent, ultraneurotic, superhip Jewish standup comedian and seeker.

The Jerusalem Syndrome is a genuine psychological phenomenon that often strikes visitors to the Holy Land - the delusion that they are suddenly direct vessels for the voice of God. Marc Maron seems to have a distinctly American version of the Jerusalem Syndrome, which has led him on a lifelong quest for religious significance and revelation in the most unlikely of places.

Maron riffs on Beat phenomena with its sacred texts, established rituals, and prescribed pilgrimages. He spends some time exploring the dark side of things, as his obsessions with cocaine (known to Maron as “magic powder”), conspiracy theories, and famous self-destructive comedians convince him that the gates of hell open beneath Los Angeles. As his quest matures, he reveals the religious aspects of Corporate America, pontificating on the timeless beauty of the Coca-Cola logo and even taking a trip to the Philip Morris cigarette factory, where the workers puff their own products with a zealot-like fervor. The culmination of Maron’s Jerusalem Syndrome comes during his own tour of the Holy Land, where, with Sony camcorder glued to his eye socket, he comes face-to-face with his own ambiguous relationship to Judaism and reaches the brink of spiritual revelation - or is it nervous breakdown?

Marc Maron has considerably adapted and expanded his praised one-man show to craft a genuine literary memoir. Whether he’s a genuine prophet or a neurotic mess, he’ll make you laugh as you question the meaning of life.

I had to listen to this relatively short book in bursts because Maron is so intense he could be overwhelming! I had preordered his newest book, but it was delayed so I downloaded this book to tide me over for the month. Very funny and I look forward to comparing it to his newest. I like that he talks about his marriage- something he hints at on WTF, but never directly addresses (because he is a gentleman). In this book he is still married. Good time capsule for a currently listener. Highly recommend.

Found it interesting to hear a story that was personal and at times uncomfortable that give you an uneasy, yet wanting to listen to story line. Big fan of Maron, so do your self a favor and give this book a listen.

Give Maron a chance

Marc Maron is hilarious. He's raw, emotional and I believe he has a great narrative voice. Check out this and his other book!

Marc is obviously a great story teller and a well spoken author. The whole book is entertaining, insightful and worth the time. Easy to listen to and very relatable text despite being written nearly 20 years ago.

A wonderful commentary on the religious theme park that is Israel

After taking a spectacular and challenging trip through Israel this summer, I definitely caught Jerusalem Syndrome. Everything in my life now seems to be connected through various forms of coincidence. The number two is popping up everywhere, I see animals and objects coupled, and I find connections through words or ideas daily. I absolutely love this book’s take on the theme of coincidence in ones spiritual experience of life. I’ve become a huge fan of Maron and his podcast, shows, and now books in the past year, and I am elated to have found a book that I feel so personally connected with. It’s no coincidence. Maron is definitely something special.

It gets as dark as I expected. But I didn't except the light to get in like if did. Very beautiful and meaningful.

From this ealier work to last weeks episode on IFC, his voice, vision and perspective remain the same.
He continues to try to find his way in life. You might find that amusing, so listen to this.