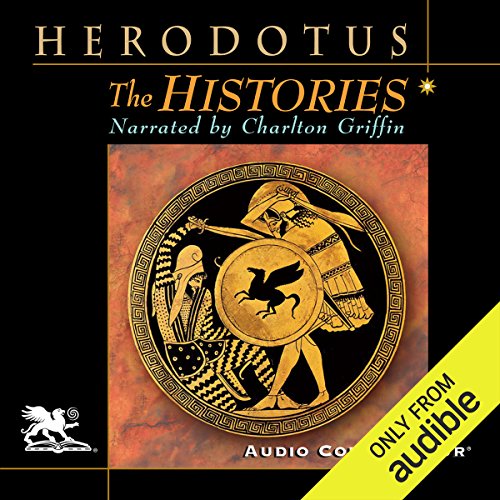 Herodotus was a Greek historian born in Halicarnassus, subject at the time of the great Persian Empire. He lived in the fifth century BC (c. 484 - c. 425 BC), a contemporary of Socrates. He is often referred to as "The Father of History", a title originally conferred by Cicero.

Herodotus was the first historian known to have broken from Homeric tradition in order to treat historical subjects as a method of investigation, specifically by collecting his materials in a critical, systematic fashion and then arranging them into a chronological narrative. The Histories (also known as The Persian Wars) is the only work Herodotus is known to have produced. It is a record of his inquiry into the origins of the Greco-Persian Wars, including a wealth of geographical and ethnographical information. Some of his stories were fanciful and others inaccurate. Yet he states that he was reporting only what he was told. A sizable portion of the information he provided was later confirmed by historians and archaeologists.

Despite Herodotus' historical significance, very little is known of his personal life and academic history. The work is divided into nine sections, or "books". This version of The Histories is by A. D. Godley, first published in 1920.

Popular for a reason

Strange sex/religious/law traditions across the very colorful world of tribes and nations more than 2500 years ago. There are also many tales and fables. My favorite bit is Herodotus wondering why the Nile rises so consistently and he present 4 different theories from presumably fellow Nile enthusiasts although he is pretty skeptical and dismantles them.
Fate/gods/prophecy and some philosophy are very present in the story especially the oracles.

No wonder I could never get through it

I have tried to read this many times but so many odd names and places each with the son of son of ... much easier to listen to someone that knows the pronunciation, it flows better than reading it.

best narrator ever. book is good as well needs a good reader to make it good

Great narration. It never ceases to amaze me how bloodthirsty these people were. I'm really surprised that Herodotus was allowed to live to travel and gather all these stories

"Soft lands breed soft men... [better] to be rulers on a barren mountain side than dwelling in tilled valleys to be slaves to others."
Herodotus

The father of history indeed

I can't believe I made it through school without ever reading Herodotus. I expected something dry and boring and difficult to listen to. I was so wrong. I really enjoyed this book and would recommend it to anyone who loves history or Greek mythology.

There is no way I could enjoy a book with all these hard names reading it, and I love ancient history. Thankfully They got a Narrator that is amazing.

Too detailed and filled with too many names

Story very difficult to follow. There are so many names of people and places used that by the time people and places identified the story is lost. May be a valuable book for historical research, but not enjoyable for general history reading.