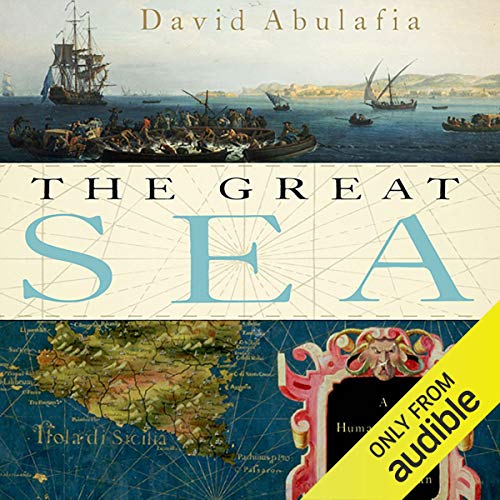 Situated at the intersection of Europe, Asia, and Africa, the Mediterranean Sea has been for millenia the place where religions, economies, and political systems met, clashed, influenced, and absorbed one another. David Abulafia offers a fresh perspective by focusing on the sea itself: its practical importance for transport and sustenance; its dynamic role in the rise and fall of empires; and the remarkable cast of characters - sailors, merchants, migrants, pirates, pilgrims - who have crossed and recrossed it.

Ranging from prehistory to the 21st century, The Great Sea is above all the history of human interaction across a region that has brought together many of the great civilizations of antiquity as well as the rival empires of medieval and modern times.

Interweaving major political and naval developments with the ebb and flow of trade, Abulafia explores how commercial competition in the Mediterranean created both rivalries and partnerships, with merchants acting as intermediaries between cultures, trading goods that were as exotic on one side of the sea as they were commonplace on the other. He stresses the remarkable ability of Mediterranean cultures to uphold the civilizing ideal of convivencia, "living together", exemplified in medieval Spain, where Christian theologians studied Arabic texts with the help of Jewish and Muslim scholars, and traceable throughout the history of the region.

Brilliantly written and sweeping in its scope, The Great Sea is itself as varied and inclusive as the region it describes, covering everything from the Trojan War, the history of piracy, and the great naval battles between Carthage and Rome to the Jewish Diaspora into Hellenistic worlds, the rise of Islam, the Grand Tours of the 19th century, and mass tourism of the 20th. It is, in short, a magnum opus, the definitive account of perhaps the most vibrant theater of human interaction in history.

This is a great historic panorama of the Mediterranean. It is meticulously researched and cogently presented. As with any work that encompasses 7,000 years, it is in some ways an overview and introduction. At the same time, it provides valuable details into, and insightful analysis of, all historic periods. I therefore disagree with the earlier reviewer in that the book does tell a story, and there are themes. First among these is the cross-cultural mixing that has occurred ever since humans started to cross the sea.
Abulafia sees the nationalism and ethnic cleansing that has occurred since the end of WWI as a terrible break from that tradition. Yet he describes earlier pogroms and deportations, all of which had terrible human costs, but none of which could long prevent such mixing. I would argue that one could evaluate ethnic cleansing as a similar horrible reaction to the persistence of cultural mixing. In that vein, Abulafia also describes how tourism serves to continue such interaction across cultures in the present.
I think Abulafia therefore overstates his disagreements with Braudel. While political history is critical, he describes throughout the book how political decisions were limited by the geography and environments of the Mediterranean and its bordering regions. To me, this exemplifies Braudel’s argument that political history can exist only within the physical, environmental and economic worlds within which it takes place.

This book was the "gate way" to a whole new field of interest for me. The way the Mediterranean as a whole and the countries around it effected the world we know today is mind boggling! Wars, people, empires, inventions, that without "The Great Sea" would never have have been a reality! This book was time consuming, complicated and hard to listen to, but I know that cool and amazing is not always easy. Thank you so much Mr. Abulafia for writing this book, it truly has changed my view on the Mediterranean world. Definitely read this book, you will not regret it! I am only a sofa-more in high school and I loved this book!

I loved this book

This audiobook was seriously epic. The narrator has an amazing voice. Towards the later part of the book and closer to the modern era I got bored but it’s because the early history of the Mediterranean was so dope, I didn’t wanna leave it.

American Narration at it's Most Disapointing

Would you listen to The Great Sea again? Why?

Yes, because it's dense with new information. If it was a text I would fill the margins with notes. It covers 6,000 years and details the rise and fall of empires we never hear of.

Would you recommend The Great Sea to your friends? Why or why not?

To my friends--certainly but my friends tend to have appetites for information. This is a book of research on a set of topics unified by location, not entertainment value. You read this book so you have background if, say, you read about Anthony & Cleopatra or the siege of Malta or the Catalonian separatist movement in the future.

Who would you have cast as narrator instead of Jason Culp?

Culp has a nice voice. That only gets you two stars. One wonders if he could find the Mediterranean on a map. A narrator should at the very least, know how to pronounce everything. Vizier is not pronounced viz-ee-yay, not even in French. (Google Translate) Give me John Lee or Wanda Mccaddon. American narrators seem to be failed actors while at least some of the Brits give the impression that they love narration and are willing to work hard at it.

Not that kind of book.

A book for those who want to know.

Would you try another book from David Abulafia and/or Jason Culp?

This book would be a great reference for anything to do with the Mediterranean. But there is absolutely no narrative in a book that is guided by covering the wide diversity of everything that involved the Mediterranean but only the Mediterranean. So for example, how various actors from the Franks to the Russians ended up being major players in their time on the Mediterranean is not addressed, just the fact that suddenly they are on the Mediterranean stage. But once "off stage," they're no longer visible to the author so their story is discontinued. I did also catch one error stating that Richard the Lionhearted went to Sicily to settle a dispute over the dowry of his betrothed. But the dispute concerned his sister, Joan. (So speaks the English history aficionado, particularly fond of the Plantagenet kings and queens, having read many non-fiction and fiction books on the this subject. Who doesn't love "The Lion in Winter" and "Becket"?) Maybe this was just a minor error, but made me wonder what else could be wrong in such a long book that sorely needed an editor. I have read many many books on history, as history is my favorite subject. I would say that though I plowed through this one to learn what I could, it is one of the most poorly written books of history I have read in my now four decades of reading.I give it 3 stars for depth of material, but the lack of a narrative and encyclopedic approach prevents it from a higher rating.

no way this could be a movie!

I did not enjoy this book. It was like reading the dictionary. It covers history of Mediterranean for the last 4000 years.

I was able to put the facts in context because I had already read Durant, Gibbon and Plutarch. I would recommend you rad some of these before attempting this book. Also have a book of historical maps at hand to refer to. This will help you keep place names straight.

No story is included to hold the attention (this is important for an audio book). A biography has a story and works as an audio book. However, I was able to to get many interesting facts from the experience when I was able to force my mind back to the audio stream.

This audio book does not work, but it is not the reader's fault. The text itself is the problem.

Amazing depth and wealth of knowledge across the ages of this fascinating area of the world. Extraordinarily well researched and structured around the lives of those that lived upon and around this great Sea. Despite covering such a broad spectrum of history, areas and cultures I found it far from a simplistic, and instead providing a refined and perceptive understanding of the various people of the Mediterranean, how their lives were affected by the sea, how they affected it, and each other. I truly enjoyed Mr. Abulafia's history, as well as the reading by Jason Culp.

To complex for me

Would you try another book from David Abulafia and/or Jason Culp?

What could David Abulafia have done to make this a more enjoyable book for you?

This book was just hard for me to follow on audio with my limited knowledge of the Mediterranean and no ability to reference a map while I listened. I listen to my books while I drive and would be very interested in reading the print version of this book with the reference maps on hand.

Interesting method of actually telling about the sea and not just the countries around it.