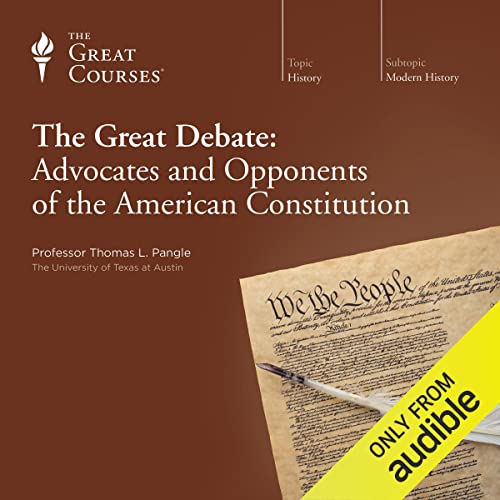 The Great Debate: Advocates and Opponents of the American Constitution

Recent years have seen an explosion of interest in and interpretation of the U.S. Constitution. Its authority and stature are routinely invoked by voices from every point on the political spectrum, with frequent references to the Founding Fathers and their true "intent." What really was their true intent?

As these 12 surprising lectures show, many of those Founding Fathers - including Thomas Jefferson and Patrick Henry - were highly critical of the new Constitution and staunchly opposed it when it was first put forth for ratification by the states as a replacement for the Articles of Confederation.

The debate over the Constitution raged for the better part of two years, and beneath its rhetorical flourishes lay not only the longest and most profound civic argument in our nation's history, but also a civics lesson that deserves to endure for all time. It was an argument that would result not only in the ratification of the Constitution, but also in what that Constitution would become.

Professor Pangle takes you into this debate. You'll see which Founders opposed the new Constitution, which Founders led the battle for it, and how both sides helped define the result. In an era when contemporary arguments on the national stage so often mirror the same conflicts debated by the Founders, our own reenactment of that original debate can enrich our ability to be active and participating citizens.

Great comparison of federalist and anti-federalist

The lecture is a great break down between the federalist papers and the anti-federalist papers. Explains why the confederation was a bad idea because of lack of central power.

Having the course rewritten and presented by someone with an objective or neutral viewpoint. Clearly Prof. Pangle believes, as he often emphasizes (I could not tolerate more than the first three sessions), that the UNITED States should never have united, but should have remained loosely Confederated. His emphasis of negative views toward the US Constitution and casual discounting of the clear support for the Constitution from Founding Fathers (including George Washington!) make a mockery of this important historical document. To say that 16 out of 55 (29%) delegates to the Constitutional Convention did not sign the document misses the point that OVER 70% of the delegates supported this document of remarkably new and challenging concepts!

What could The Great Courses have done to make this a more enjoyable book for you?

Having the course rewritten and presented by someone with an objective or neutral viewpoint.

Pretend he spoke objectively. If you believe the US should exist as a loose confederation rather than as United States, tell me before-hand so I can avoid your course.

If you could play editor, what scene or scenes would you have cut from The Great Debate: Advocates and Opponents of the American Constitution?

Replace this course with one developed and delivered by an objective educator.

I thought that I knew a lot about the Constitutional Convention, ratification, etc. Pangle added a whole new dimension to my knowledge. He is much more charitable toward the anti-Federalists than most historians. He got me to see them in a different light.

Very interesting and informative. Makes you realize some things never change, as the debate then about government power and civic virtue are not too different than today, though maybe we have lost some depth in our contemporary arguments. This is a relatively short course, but a good introduction to the debate around the constitution at the time of its adoption.

Oustanding series of lectures on the constitution

Professor Pagle is an able scholar but he also presents the material in an engaging manner that kept my attention. Dr. Pangle provides balanced coverage of the competing arguments at the constitutional convention and the ratification debates between the Federalists, who advocated for a strong centralized government, and the Antifederalists, who advocated for less centralization and insisted on a bill of rights in the constitution (though that was not added till after ratification). I have listened to his lectures more than once and this set is one of my favourite courses by The Great Courses (The Teaching Company). Understanding Madison, Hamilton, and Jay's Federalist Papers is not adequate to understanding the constitution. You can understand both sides, and this course is a good way to do so.

A Perfect Overview of the Federalist vs. Anti-federalist debate

Thomas Pangle is a genius in his ability to pick out the most relevant and organizationally proficient quotations and arguments from either the Federalist Papers or the Anti-Federalist papers, and the other sides responses to the other. The chain of arguments he follows is clear and made easier to understand with his excellent explanations and occasional updates on how the arguments align with our modern reality. I would recommend this course to anyone with an interest in American politics or political philosophy in general. Any regular citizen, as well as informed scholar, can and will benefit from Thomas Pangle's noteworthy lectures on the American Constitution found here.

Professor Pangle provides the academics wrapped up in a passionate and eye opening review of the struggle set before the founding fathers. Thanks for your insight.

Short but concise. This is an amazing look at the Constitution and the way the framers thought of it, both for and against. I think this is a pivotal and essential course.

Instead of having fun and seeing 'Hamilton,' this

The Founders of the Republic apparently wanted to start a nation built like Classical Rome or Athens. But they debated: how much power to grant to the farming classes? The individual States? The Federal Government? Hamilton wanted a strong central Government to make certain Americans paid our debts and could mount a strong national defense. James Madison, also a Federalist, felt that people their Institutions, and even branches of government needed to have their worst impulses checked and balanced. Their ideas produced the American Constitution and 200+ years of passionate debate about Freedom, Liberty, Security, National Identity, and Politics.

More background on the individuals focused on. More back story on alliances, bitter rivalries.

Has The Great Debate: Advocates and Opponents of the American Constitution turned you off from other books in this genre?

It was okay, subject matter could have certainly been spiced up.

If you could play editor, what scene or scenes would you have cut from The Great Debate: Advocates and Opponents of the American Constitution?

Some of the verbatim reading from Federalist papers, etc. Replaced with history, or background knowledge.

Would recommend a different telling of the trails and tribulations this generation faced.