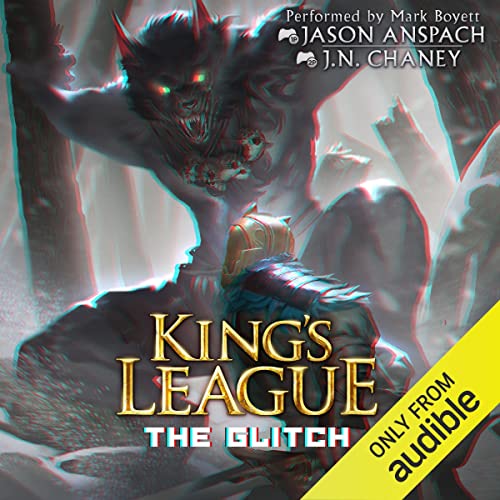 Word about the Tournament of Champions is out.

The hunt for God armor is ramping up as players who want in on the action flock to Dawnshire and the other Champions’ strongholds to try their luck. Between that and Dirk’s agreement with Dead Hunter, his own quest to complete the Graydon’s is temporarily put on hold.

To make matters worse, Dirk is faced with the unsettling realization that Dead Hunter isn’t just a good player—he’s a master. Graydon’s Champion will have his work cut out and then some if he wants to stay alive and come out on top.

As he starts to contemplate a new strategy, the unthinkable happens: King’s League devs upload a patch that doesn’t go as planned, turning the game upside down.

Dirk is now Spyce, and he gets more than a new wardrobe.

King’s League stops for no one. As the group continues to quest through the unfamiliar gamescape in unfamiliar avatars, they have no choice but to dive headfirst into the chaos.

Through it all, unrest stalks the group from within at every turn. Will their friendships survive the glitch? Dirk isn’t so sure. There are still battles to be fought and lessons to be learned, and the most important of all may have nothing to do with the game at all.

Boot up your rigs and join in on the latest addition to this exciting LitRPG experience by Associated Press and USA Today best sellers Jason Anspach and J. N. Chaney!

I loved the reflection of character on the part of the MC characte's growth.

This was so fun. I love what you guys did with the avatars, made it very interesting. This story is developing in such a ethical way-good versus evil.
Thank you Mark for doing what you do so well.

A twisted book in the series

Jason Anspach and JN Chaney have written a story plot based on a glitch in the gaming program that ends up twisting every players gaming experience where players avatars are switch with other players and they then must play with their traded players attributes, armor and weapons load-out. As one can imagine, this caused players to readjust both their fighting style but also psychology regarding the new avatar body character class. Clearly, this caused most player's to loose their groove, so to speak.

Overall, I enjoyed the book but, oddly, my impression of Dirk changed significantly. The authors did a great job showcasing Dirk's anxiety level increases as he experienced significant challenges in-game as well as in real life but his eventual self-centered explosion made him seem more like a loose cannon than a leader which, while maybe unfair, made him a less interesting character, even after he eventually turned things around.

Also, the corporate C-level admission that the "glitch" was caused by some malware was left unknown as to who was responsible and how they were able to introduce the hacks.

Book 6 awaits ... for probably another 8-12 months for completion.

Can’t get enough of this series keep ‘em comin! Great escape from my every day bs.

Great addition to the story. Great narration. Can’t wait until the next book! Excellent job at consistency and quality of work.