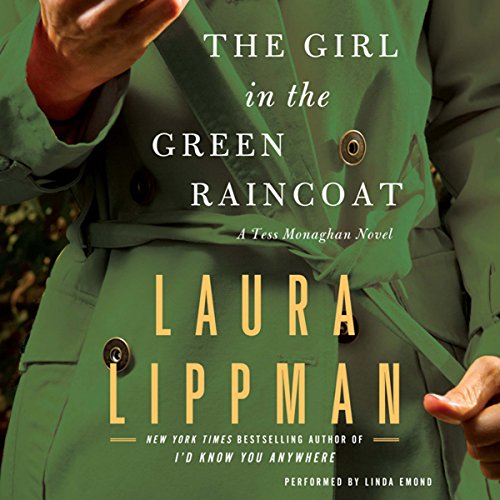 The Girl in the Green Raincoat

The Girl in the Green Raincoat

In the third trimester of her pregnancy, Baltimore private investigator Tess Monaghan is under doctor's orders to remain immobile. Bored and restless, reduced to watching the world go by outside her window, she takes small comfort in the mundane events she observes... like the young woman in a green raincoat who walks her dog at the same time every day. Then one day the dog is running free and its owner is nowhere to be seen.

Certain that something is terribly wrong, and incapable of leaving well enough alone, Tess is determined to get to the bottom of the dog walker's abrupt disappearance, even if she must do so from her own bedroom. But her inquisitiveness is about to fling open a dangerous Pandora's box of past crimes and troubling deaths . . . and she's not only putting her own life in jeopardy but also her unborn child's.

Previously serialized in the New York Times, and now published in book form for the very first time, The Girl in the Green Raincoat is a masterful Hitchcockian thriller from one of the very best in the business: multiple award-winner Laura Lippman.

I love Lippman and Emond is great!

I am a huge Laura Lippman fan - I've listened to all her novels. This story follows a recurring character named Tess, a private detective. It is a Rear Window-esque story with some nice little twists. I loved it but I wanted more. It was only 4+ hours long and not enough for me. Linda Emond is the very best at reading Lippman characters. I love to listen to her.

Rear Window with a twist

Linda Emond does an excellent job narrating this story. There were some very unexpected twists to this plot. I am growing very fond of the characters in the Tess Monaham series. I enjoyed it and will look for another book by Laura Lippman.

Tess Monaghan is at it again

Even with forced bed rest, Tess can't seem to curb her curiosity. This mystery has a "Rear Window" feel to it. However, in this story, she has a new investigator, her friend Whitney, and the internet to help dig into the mystery. I enjoyed the update on Tess's life and another PI case.

Linda Emond is an excellent narrator.

A wonderful side trip for Tess Monaghan Fans!

Although Tess remains front and center in this novel, the feel of this shorter novel is something of a departure for our heroine. Laura Lippman pays homage to the work of other mystery masters, involves all our favorite characters from her previous books, and saves the best for last.

If you like Laura Lippman, you will love this one!

I live between Baltimore and DC so I could relate to the area in novella. It was a good quick listen with a great narrator. I will seek out other stories by this author.

DISAPPOINTED IN THE CHARACTER INTERACTION

Tess and Crow seemed off in this one and she never explained why or dealt with it in any way. We hear Tess's thoughts and she sounds like she wants to leave Crow then wants Crow to care and geesh, makes me wonder if Lippman has a relationship she is struggling with. The ending is a surprise -- which is why it got a 4 -- tho I saw no clues as to the ending. A rabbit out of a hat, which is not skillful. Otherwise, this is not one of her best. On the other hand, we'll buy more at this point because of her track record.

Enjoyed them all but this one the best

Would you consider the audio edition of The Girl in the Green Raincoat to be better than the print version?

I have listened to all of the Tess Monaghan novels to date. This last one in the series I enjoyed even more than the others, because of the inclusion of personal glimpses into the characters in the series. I listened on my commutes back and forth to work and I must say that this one was just impossible for me to stay true to that schedule. I kept cheating and listening after I got home and during my lunch hour. It was over too soon. It is the shortest of the series.Linda Edmond's reading or I should say acting is very entertaining and she does a great job in the whole series that she narrates. I have no idea if it is better than the print version. I like listening to stories. I think the tradition goes back to the beginning of the spoken word.I relish the idea of "tell me a story" and go after books that do just that and do it well.I am so happy to discover Laura Lippman. I have been looking for such an author since Ross McDonald died. I have finally forgiven him for that now that I found Ms. Lippman. He combined story with place and so does she and I just love that. I am so looking forward to the next release of Tess Monaghan's next adventure. How is she going to handle being a mom and a PI? Should be fun to find out. Cheer and enjoy.