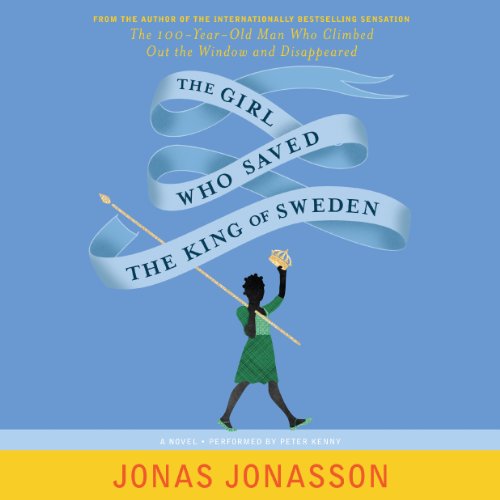 The Girl Who Saved the King of Sweden

A wildly picaresque new novel from Jonas Jonasson, the author of the internationally best-selling The 100-Year-Old Man Who Climbed Out the Window and Disappeared.

In a tiny shack in the largest township in South Africa, Nombeko Mayeki is born. Put to work at five years old and orphaned at 10, she quickly learns that the world expects nothing more from her than to die young, be it from drugs, alcohol, or just plain despair. But Nombeko has grander plans. She learns to read and write, and at just 15, using her cunning and fearlessness, she makes it out of Soweto with millions of smuggled diamonds in her possession. Then things take a turn for the worse....

Nombeko ends up the prisoner of an incompetent engineer in a research facility working on South Africa's secret nuclear arsenal. Yet the unstoppable Nombeko pulls off a daring escape to Sweden, where she meets twins named Holger One and Holger Two, who are carrying out a mission to bring down the Swedish monarchy...by any means necessary.

Nombeko's life ends up hopelessly intertwined with the lives of the twins, and when the twins arrange to kidnap the Swedish king and prime minister, it is up to our unlikely heroine to save the day - and possibly the world. In this wild romp, Jonasson tackles issues ranging from the pervasiveness of racism to the dangers of absolute power, while telling a charming and hilarious story along the way. In the satirical voice that has earned him legions of fans the world over, Jonasson gives us another rollicking tale of how even the smallest of decisions can have sweeping - even global - consequences.

First, let's correct an omission - the book is narrated by Peter Kenny. He narrated a lot of books available on Audible, and his experience shows. The reading is fluent and nuanced. It is also totally inadequate for this book. Jonas Jonasson has a dry humor that is betrayed by the engrossing reading, which makes it sound like a sitcom. A pathetic misunderstanding and a huge letdown from the narration of the author's other book by Steven Crossley.
That being said, the book itself is not as good as The 100 Years Old Man...The story has some good parts, particularly the ones in Soweto, but otherwise it a lot duller and repetitive, even self-plagiarizing.
So, this audiobook is OK, but I came with high expectations after listening to the author's first book. Hopefully he will come back to his senses for the next book and the original narrator returns. I hear they made movies of both books, so I am up to see them (one available on Amazon Video already), just to see what they manage to do with some good literary material in that approach.

I didn't like this one as much as The Hundred Year Old Man for several reasons;

1. As a native speaker of Afrikaans -- we don't sound like that.
2. The book tends to set up the idea that all white South Africans, especially all Afrikaans South Africans are bigoted idiots. Whilst the topic of Appartheid can keep one busy for eternity and a day, there is no denying that it was a terrible system. Probably the only thing that elevates it slightly above Hitler's Nazis would be the absence of gas chambers and a world war -- though one could enter several arguments about Wouter Basson's work and the Angolan war at this point.
3. I enjoy his style if writing. The text is steeped in irony and sarcasm and that is refreshing, but when he attacks your culture and your people the fun dries up quite quickly. I was eight years old when Appartheid ended. I don't have much memory of the injustices and politics and luckily escaped most of the indoctrination, but I know this: Afrikaners have more to offer than the distasteful memory of Appartheid. We as a people are no more guilty of the actions of our leaders than the average German citizen is of the Holocaust. I would like to know how other people feel when their culture is attacked like this. When they are made out to be villains over a system they had no control over. In my whole life I never witnessed my parents being cruel or unjust to the black people in our lives. If we were all like Piet du Toit, I would have moved to Orania and shut myself off from the rest of the country. I love this country. And I love its people and it is only with the determined effort of the average citizen that we'll be able to fix the mess both poles of our society have managed to make until now. Nkosi Sikelel' iAfrika. Ons vir jou Suid-Afrika.

By the same author of 'The 100-Year-Old Man Who Climbed Out the Window and Disappeared' this story follows a similar format of a tangle of lives through years and countries and political and social events, unlikely chaos is tied together in imaginative scenarios through historic and current events recognizable by anyone who has watched the news in the past decades.

This book had less laugh-out-loud moments than 'The 100-Year-Old-Man . . . ' book I listened to previously. But the previous book was so wonderful that I looked forward to the release of this one. In a "damned-if-you-do" and "damned-if-you-don't" dilemma an author may face, I noted and thought about the author's using a similarity in plot structure and interactions in this book (road trip across countries and time, kitchen table conversation scenarios, hiding a big thing in the barn . . .) but reckoned that maybe it was a good thing for an author to serve the readers a variation on what they already like.

The witty and sarcastic view of society, certain types of people, and twisted take on historical events were clever. The cheeky conversations were delightful.

The narrator is fantastic and fun.

The story moves fast, has multiple characters that weave in and out and you have to pay attention as a lot happens at once. It's an imaginative book, fun to listen to, and a pleasant diversion from real life. As previous comments stated in reviews on 'The 100-Year-Old Man . . . " book stated, it's somewhat 'Forrest Gump'-like.

Quirky, wise, fast-moving, and utterly engaging! The story moves at a pace that makes your head spin, but was so much fun that I had to keep listening. And the narrator is a master!

I listened to Jonasson's other book "The 100 year old..." and really enjoyed it so jumped on this one when it was released. I was not disappointed--this book was even better.

The themes of this story are:
1. do not underestimate people and
2. still waters run deep.

Jonasson's style is outlandish, with action and scenarios that make you shake your head and chuckle. The suspension of disbelief is easy though because the characters are so lovable that I end up cheering for them no matter how nutty the situations and solutions are. His novels are just fun.

The narrator was great. He wrestled with a lot of accents and handled them very well.

At least it had a happy ending

It had so many good reviews I kept listening thinking it had to get better. Then I had invested so much time I felt I had to listen to the end. Everyone gets their happily ever after except me. Tedious listen

Jonas Jonasson won me over with The 100-Year-old Man Who Jumped Out the Window, which I thought would be impossible to beat, but The Girl Who Saved the King of Sweden was even better. The characters are quirky, imperfect and flawlessly written, and the story is spellbinding page after page. Peter Kenny narrates it masterfully.

Don’t wait I like I did listen to this book

I bought this almost a year ago,but found other books that sounded more interesting. I wish I had started it a long time ago. It made me laugh and kept me entertained for hours. Just as it felt like it was slowing down a bit it picked right up. Funny, quirky, and all around good listen.

Every character written fully and with sly delight. Unbelievable narrative that is truly believed and fits nicely with history.
Bravo!

I loved the strings of history that tie this story together as well as the evolving dry humor throughout. Jonasson’s books are great fun!

Great story, funny and entertaining. The book just kept getting better and better, could not stop listening.

After listening to another book of Jonas Jonasson I got hooked on his style of telling stories and purchased yet 2 more books ; I like his deadpan humour and his style a lot and it makes me happy (which during a pandemic and during winter is quite a nice thing ....) . Sometimes the plot is a bit far-fetched, but who cares, right ? it gets really absurd - and I love it. In the middle of the book I got a bit bored though. Therefore only 4 stars for the plot. As I don´t wanna spoil the book for you I won´t go into details :) The narrator does an really amazing job - he has a very pleasant and resonant voice (and yes I am picky....there are voices here on audible I just cannot listen to - with this airy , freaky touch to it - brrrrr.....) and a lively melody in his pitch which keeps you awake and also in a good mood (without "singing " too much though) . recommend