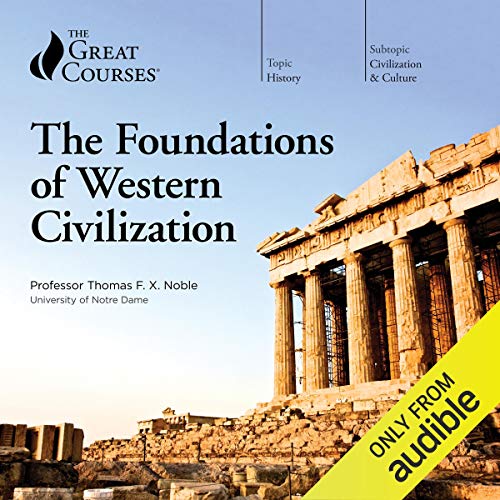 The Foundations of Western Civilization

What is Western civilization? According to Professor Noble, it is "much more than human and political geography," encompassing myriad forms of political and institutional structures - from monarchies to participatory republics - and its own traditions of political discourse. It involves choices about who gets to participate in any given society and the ways in which societies have resolved the tension between individual self-interest and the common good.

Within this series of 48 lectures, you'll discover the many ways in which Western civilization has addressed those questions, from its first stirrings in the great river valleys of Iraq and Egypt in 3000 B.C to the beginning of the 17th century and the dawn of the modern world. Your learning will cover vast amounts of territory and thousands of years, beginning in the ancient Near East and moving to Greece and then Rome. You'll explore ancient empires, including those of Persia, Alexander the Great, and Rome.

You'll watch as western Europe gradually expands, both physically and culturally. And you'll examine the globalizations of Western civilization with the Portuguese and Spanish voyages of exploration and discovery.

This broad and panoramic series, ripe with the telling detail on which history can turn, will help you pull an enormous sweep of history together into one coherent - though by no means closed - framework as you watch history develop under the influence of such critical factors as ecology and environment, geography, and climate; government and economics; technology; religion; work and leisure; philosophy; literature; art and architecture; and virtues, values, and aesthetics.

Not Engaging or Very Interesting

What disappointed you about The Foundations of Western Civilization?

I really wanted to like this course. I am a big history buff and this course covers so much history both in relation to time and place. But I just could not get into it. The professor’s general style was just not a hit with me and the following became increasingly annoying: his voice would fluctuate from high to low, his humor just wasn’t effective, he would talk fast, and I didn’t get the sense he was teaching as much as he was having a discussion.

It felt like the professor did not spend enough time “pulling it all together”. He only lightly touched on why certain civilizations like the ancient Sumerians, Egyptians, Persians, etc. are considered “western civilization”. A lot of times I was left wondering why certain peoples or topics were included in such a course or what defines the “western tradition”. While a huge expanse of history was covered there was almost no time spent on what the foundations were or how one would define "western civilization".

Lectures 25-26 finally felt like he was hitting his stride and connecting with me so I went back and re-listened to the previous 24 lectures thinking maybe I should give him another chance with an open mind. Alas I had the same reaction to his lectures and just didn't find much that was interesting in them. Here are the lectures I did find enjoyable:

However, your experience may be better. For those of you willing to give it a shot here are the basics: time period covered is generally between 3000 B.C. to A.D. 1600. Here are some of the general topics covered:

I am going to listen to Professor Harl's "Great Ancient Civilizations of Asia Minor" course hoping it engages me and succeeds where this course fails. I really wish The Great Courses would do a course on medieval Europe focusing on the formation of current states like France, Spain, Portugal, Netherlands, Poland, etc. I know there are some courses on 1600 Europe onward but I'd be interested in a course on political history of the major countries prior to that time period.

Where does The Foundations of Western Civilization rank among all the audiobooks you’ve listened to so far?

top 10
I loved the material but a history major may already know all this stuff.
I will proceed directly to Vol 2.

What about Professor Thomas F. X. Noble’s performance did you like?

This is the weakness. The Prof is a good lecturer but his dynamic range is large so the audio volume varies greatly making it at times a difficult listen in the car. I frequently needed to replay sections that had fallen to a near whisper.
A *dynamic range compressor* add-on to the audible app would be a great idea! This same problem appears in many other recordings.

I thoroughly enjoyed this.

All of the Great Courses are fantastic. a problem occurs when the narrator constantly slides in the slanted left-wing viewpoint prevalent in academia. This is not the issue here however. Magnificently unbiased. Absolutely engrossing.

If you could sum up The Foundations of Western Civilization in three words, what would they be?

This is a good summary course of a western development from early civilization up through late antiquity.

I'm not sure who influenced whom, or if it's simply a coincidental speaking style, but Professor Noble comes off like Dan Carlin in his start-stop, sometimes manically-rapid delivery and tone. It's not for everyone because it doesn't sound much like a lecture recorded in a lecture hall, nor is it going to delve deep enough into any one subject to enlighten true scholars, but fans of Carlin's "Hardcore History" will feel right at home with this course. I found it plenty entertaining and worth listening to.

I'm interested in the subject matter but can barely focus on what's being said because the speaker is so irritating. It's like he's trying to get a class of 8 year olds interested in history by being the cool professor, but all he is really succeeding in doing is dumbing material down and delivering information very poorly. I'm really struggling to make myself listen to this one.

an eye opening book! loved it. I highly recommend it. it inspired me to learn about a lot of other topics for which I had to stop this book and investigate those topics further..then I would return back to this book to continue.. as a result it took me a year to finish this book and 10 others (including : the persian empire , foundation of eastern civilization , off the edge of the map , a short history of nearly everything )

This is my second, all time favorite history course thus far. I have only been a patron of the Great Courses for about 7 or 8 months when my favorite podcaster mentioned they were now on Audible. I highly recommend this particular course. The professor is very good at what he does, captivating, interesting, and knowledgeable.

An interesting survey of thousands of years of history. Tracks some themes from ancient Mesopotamia through the early modern period. I would say that this series is good for giving an overview of the periods discussed, but in the course of the survey there are many serious over generalizations that will grate on anyone who already has an interest in history. The professor has an extremely annoying and condescending way of speaking - - he will explain something very obvious, and make the reader feel like they're in a remedial class. Then in the same lecture, he will pretend like certain obscure facts are as obvious as could be, and frequently says things like "as you all know well, Clovis was not actually a carolingian leader," making the listener feel like a idiot who should know these things. Overall, a good course with some serious flaws. Even as a huge history nerd, I learned some new things. But beware, the lecturer is certainly not for everyone.

Eurocentrist and catholicized version of Western history. Plus narration is not good. He interrupts himself constantly and keeps repeating aahhh, aahhh. It is so annoying that I had to stop listening halfway and get back to it weeks later to finish it.

I have listened to numerous courses from the Teaching Company, but this one is by far the best! Clear, concise and very engaging Professor

it concentrates especially on the philosophical changes rather than on single characters. this gives an entertaining overview and a bases to dig deeper into special areas of interest. at the beginning the speaker was pretty challenging. first impression made him look like an annoying "know it all". But after the first chapters, I came to like and even enjoying him. it helps, when you turn the speed of the tape 1 percent slower. so the chance to follow his thoughts during the multiple alterations in speaking speed during one sentence is significantly higher. I'm looking forward to his next edition

I think this kind of audiobooks would be even more useful if parents made their children listen to them. They may need such a structured overview at an early age to understand history at school and later on in life.

Just endure the high pitch and the awkward speech patterns:, the content will make up for it! I especially appreciated that Prof. Noble consequently tried to figure out how a contemporary would have interpreted the enfolding events.

I will ah ah try to *tsk* write, in, the, same ah ah....manner, as the... ... ... lecturer *tsk* speaks. Alright, *Tsk* WhileIfindthelectures very ah....interesting, his ah *tsk* manner of speech is making me ah ah ah crazy, kay? Back to normal: I believe the reader of this review already knows what I mean. I find the contents of this series of lectures, as usual with The Great Courses, very interesting. But in some of the Courses the speaker is difficult to follow once his or her "ticks" come into your conciousness. The sound of his tongue disconnecting from the roof of the mouth is driving me nuts, represented above with a *tsk*. Nevertheless, if you can ignore that, you'll find a good long-term historic overview of how our cultures came to pass.