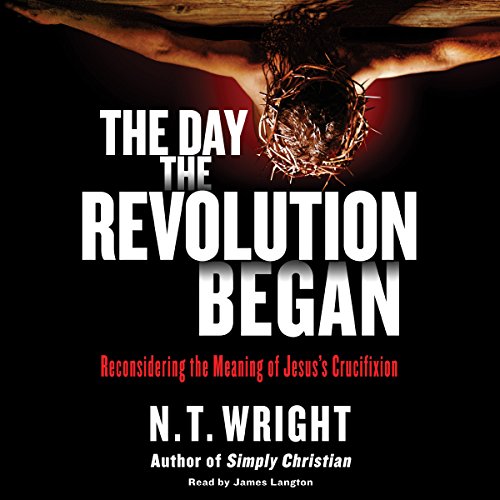 The Day the Revolution Began

The renowned scholar, Anglican bishop, and best-selling author widely considered to be the heir to C. S. Lewis contemplates the central event at the heart of the Christian faith - Jesus' crucifixion - arguing that the Protestant Reformation did not go far enough in transforming our understanding of its meaning.

In The Day the Revolution Began, N. T. Wright once again challenges commonly held Christian beliefs, as he did in his acclaimed Surprised by Hope. Demonstrating the rigorous intellect and breathtaking knowledge that have long defined his work, Wright argues that Jesus' death on the cross was not only to absolve us of our sins, it was actually the beginning of a revolution commissioning the Christian faithful to a new vocation - a royal priesthood responsible for restoring and reconciling all of God's creation.

Wright argues that Jesus' crucifixion must be understood within the much larger story of God's purposes to bring heaven and earth together. The Day the Revolution Began offers a grand picture of Jesus' sacrifice and its full significance for the Christian faith, inspiring believers with a renewed sense of mission, purpose, and hope and reminding them of the crucial role the Christian faith must play in protecting and shaping the future of the world.

Standard Wright, both the strengths and weaknesses

My traditional approach to Wright is to listen to the book on audiobook once, than re-read it again later in print. This allows me to get an overview of the argument and then to focus more clearly on the parts of the argument on the re-read. This is certainly a book that I am going to need to re-read to fully understand, maybe twice.

One of the reasons that many get irritated with Wright is that is keeps presenting his ideas as either new, or the first return to ‘correct’ understanding in hundreds of years. If you are irritated about that, you will be irritated here. Wright’s strength is connecting the broad narrative sweep of scripture and the 1st century era culture. I think if he started working with a historical theologian that helped him connect his ideas explicitly to the historical theological work of theologians after the first century, it would help tone down that irritating tic and help readers connect his thought to its historical roots.

Wright wants to help people think clearly about how their theology connects to their daily life. I think that is one of his strengths. But part of what the church today needs is a connection of its theology to the historical church. But his description of his work as either new, or a rediscovery of what is lost, minimizes the connection to the historical teaching of the church. This is particularly true for low church fans of his that do not already have a strong connection to the traditional church. Maybe this is a blind spot that Wright has because of his British Anglican setting. Wright himself has a strong sense of both history, and the world wide range of the church, but many of his readers (and biggest fans) do not. (My reading of Thomas Oden in particular has convinced me of the importance viewing the theology of the church as a continuum with historical teaching and not new.)

Like virtually all of Wright’s books, The Day the Revolution Began is impossible to easily summarize. The best I can do is to say that Wright is making the argument that the cross was not primarily about dealing with sin (although it did do that) but about fulfilling the covenantal promise to Israel. The cross shows that the kingdom of God, which Jesus was claiming at the cross, is fundamentally a different conception of power than earthly power structures. And that the cross isn’t about Jesus dying for our sins as individuals but more about Jesus dying in order deal with the corporate idolatry of Israel as illustrated by the prophets and draw the rest of the world into covenant with God.

The biggest indictment against modern theology that Wright is making in the Day the Revolution Began is that we have reduced the cross to the fulfillment of a ‘works contract’. Jesus paid the price of God’s anger toward our individual sin and died so that God would forget his anger. Again, Wright is not saying that there is not some truth to this view. But it is a partial truth. Jesus’ death was part of the plan from the beginning not a result of our sin.

This quote (about Galatians’ message) is a good example of Wright’s goal here. (He is trying to get us to look at the cross from a different angle to help us understand it better.)

"The letter is about unity: the fact that in the Messiah, particularly through his death, the one God has done what he promised Abraham all along. He has given him a single family in which believing Jews and believing Gentiles form one body. What Paul says about the cross in Galatians is all aimed toward this end: because of the cross, all believers are on the same footing. And if that is the “goal” of the cross in Galatians, we will gain a much better idea of the “means.” As elsewhere in this book, our task is to rescue the “goal” from Platonizing “going to heaven” interpretations and the “means” from paganizing “angry God punishing Jesus” interpretations—and so to transform the normal perception of what “atonement theology” might be from a dark and possibly unpleasant mystery to an energizing and highly relevant unveiling of truth."

"And that means what it means not because of a “works contract,” a celestial mechanism for transferring sins onto Jesus so that he can be punished and we can escape, but because of the “covenant of vocation”—Israel’s vocation, the human vocation, Jesus’s own vocation—in which the overflowing love, the love that made the sun and the stars, overflowed in love yet more in the coming to be of the truly human one, the Word made flesh, and then overflowed finally “to the uttermost” as he was lifted up on the cross to draw all people to himself."

It's a great book, and read very well. The only thing that could have been an improvement would be if it was read by the author- N.T. Wright's voice is like sweet cream butter.

Wright masterfully navigates the biblical texts to show that the atonement was not about some pagan understanding of getting right with an angry God through a works covenant, but instead the announcement of God has broken through into the world through his Messiah, is King, and to restore us to our position as a royal priesthood.

Finishing this was a sheer act of will. Bishop Wright could have done with a lot less condescension toward those who might understand the scriptures slightly differently than he does. He keeps driving at the "all our nothing" embracing of his way of thinking while never giving any credence to the idea that his narrative theology might simply be complimentary to traditional systematic theological approaches to the atonement.

N.T. Wright not only gives us a fresh view of the cross and it's meaning, he challenges our understanding and presentation of the gospel. listen to this book and join the revolution!

Great corrective for Western Xty's embrace of "I've Got Mine" mentality!

Slow start but the repetition of what was different in the world at 6pm on the first Good Friday revealed a much bigger mission than the oft preached substitutionary atonement. This gave me great energy and passion for continuing to preach repentance of sin to claim the forgiveness of King Jesus, but to not sidestep the cross-bearing aspects that that repentance will bring--in fact, helping my congregation to embrace the suffering that may (will) accompany true repentance and cross-beating! Great read.

The message was not new. A different perspective. Powerful. The cross marks the beginning of God's Kingdom here on Earth.

He keeps telling you what new interpretation is about to be revealed but there is nothing new in this repetitive dissertation. Maybe if you had the physical book it would make more sense.

The author has some extremely important things to say for 21st century New Testament Christians who have bought themselves down in a series of theologies for the past thousand years without looking at the true meaning of the cross of Jesus. The Reawakening of what the crucifixion of Jesus really meant for mankind and all of God's creation is an important discussion that none of us should shy away from. In his many theories and long drawn-out discourses on the history of mankind and different ideas and thoughts about forgiveness, the nature of God, and being in a new vocation to God, the author spares nothing and giving his opinion on what the Pagan World means verse what God had planned all along. The place where his arguments become tenuous, is in assuming that just because some idea can be found somewhere in Pagan worship or folklore, that precludes it from ever being a similar situation or idea or thought in God's plan for mankind. we can agree is Christian's that because God created the Earth to work a certain way and created all the elements to work together that they are certain truths and ideas and theories they will always point back directly to God, whether man thinks he originated them or whether they came from the mouth or pen of an inspired Ryder or profit in the New or Old Testament. the author does an extremely good job of pointing out the importance of baptism into Jesus Christ, as much more than the ritual or outward sign that many in the last 200 years have tried to make it out to be. for this year's to be commended because many authors especially popular ones are not courageous enough to tackle this subject and show where it fits in God's plan from the beginning for the Salvation of his world and those that are called by vocation to rule over that world in the likeness of God. if you have 16 hours and can devote it all to concentrating on the words and theories of this book then I recommend it, if you are looking for a simple read to back up good feelings of positive New Testament preaching, then there are other much shorter and fluffy or books that you can spend your time on. I look forward to reading other works by this author, and hope to catch a series of lessons or seminars where I can discuss some of these important topics and issues with him in person.

Yet another great book by N T Wright. I have enjoyed this book as all of his others.