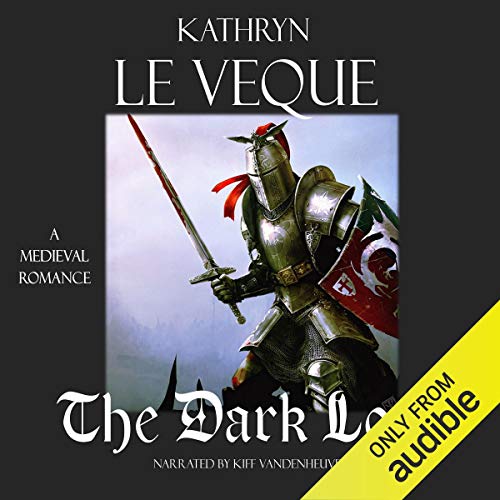 The Dark Lord: Book 1 in 'The Titans' Series, Volume 1

The year is 1180 A.D. and times are very dark. England is lawless for the most part and the people live in fear. Rising to power during this time is the vicious and brutal knight Ajax de Velt. His mission is to conquer a large stretch of the Scots and Welsh border, commandeering wealth and property along the way. He wants to be the most feared and powerful warlord in all of England, Wales, and Scotland, and he is well on his way. The last in a long line of dark and brutal warriors, Ajax is the most ruthless and ambitious knight in the Isles; even the heartiest warriors fear the man for his cold-blooded tactics.

More than that, his bloodlust, as well as his sheer skill with a blade, is legendary. But as Ajax and his army conquer the latest castle in his plans to secure the borders, he unexpectedly meets his match in a spitfire of a woman named Kellington Coleby. Beautiful, intelligent and feisty, Lady Kellington refuses to surrender to the man as handsome as he is brutal. The warlord and the maiden go head to head in this unforgettable story of love, battle, devotion, fear, and adventure.

Would you consider the audio edition of The Dark Lord: Book 1 in 'The Titans' Series, Volume 1 to be better than the print version?

The Audio Book is definitely better than the book, I was able to listen to it at work and while I was driving.

What other book might you compare The Dark Lord: Book 1 in 'The Titans' Series, Volume 1 to and why?

There is no book to compare to The Dark Lord, it is in a category all itself!

The part that most moved me was when Jax finally realized that there are consequences for his actions. Not everything is as he was taught. Having mercy is not a weakness, but a strength. People will show respect to you, not fear.

I enjoyed this book because it kept my interest throughout the whole story. I felt their emotions swirling around me as the narrator (Kiff) worked His way through chapter after chapter of this fantastic story. Worth a credit? Absolutely the best Medieval Romance book so far that had me questioning "who needs sleep anyway?" as dawn broke. So that folks is a YES.

Yes. Because the Author is one of my top favorite 3 in the world right now. Can we get the rest of this series?

The dark lord was definitely my favorite. I loved reading about him changing. This story is kind of an adult version of beauty and the beast.

Which character – as performed by Kiff VandenHeuvel – was your favorite?

Can we please get the rest of this series on audible?

A Most Fearsome Knight--took control of my heart!

Where does The Dark Lord: Book 1 in 'The Titans' Series, Volume 1 rank among all the audiobooks you’ve listened to so far?

It's right up there at the top!

Ajax was one scary man, but the changes in what he was and what he became were very big draws.

Ajax de Velt, the darkest of knights had no heart – not because he had a choice, for he did not. His heart lay buried within his mother’s unmarked grave. Brought up by a demanding, hard father he learned all his cruel and merciless methods of warfare from him. The biggest lesson was give no quarter—leave no one living, NO ONE. He was a man driven with ambition to claim as many castles he could, all with the same unwavering drive. He was a colossal warrior, his reputation preceded him and no man dare cross him.

Lady Kellington, daughter of Sir Keats Coleby of Castle of Pelinom, was an unusual women. Full of grit, bravery and a passionate nature, she would not plea for her life when told she should. She bravely told Ajax de Velt anyone besieged had the right to defend themselves. They did nothing wrong to warrant being put to death.

At first Ajax was intrigued, not understanding any of what she spoke. At this point I started feeling sorry for this dark lord for he truly didn’t have the emotion to understand what he did was senseless cruelty. It was just the way of war.

I was reminded of Scheherazade, 1001 Nights. As long as Kelli had his attention he would spare her life. She fascinated him, and didn’t cower or back down as others. The understanding between these two slowly grew. She saw goodness in this knight where others did not. It was beautiful to see the relationship grow between the two and rather scary, for Kelli didn’t know how to keep quiet what was in her mind.

This story had intense moments, starkly contrasted to some very tender ones and with a depth I’ve begun to expect from Ms. Le Veque’s writing. The story’s full-fleshed characters drove the story forward. Superbly crafted, I was gripped by this story of surprises and twists keeping me on edge.

As I’m reading/listening more and more to this author’s writing, she loves to pull us into a dark, dangerous world, and scares the wits out of the reader. With her writing style and addictive plots, there is never a time I could put one of her books down once I’ve started reading.

This is the first time I’ve listened to a voiceover from Kiff VandenHeuvel. I was most impressed with the production. He beautifully mirrored the raw emotions of the characters, with perfect timing. I didn’t feel I was being told a story, I was watching it in film. His acting training had an opportunity to shine with this story. When Ajax spoke at the beginning of the story, his voice was void of everything, bottomless and very scary. While Mr. VandenHeuvel’s voice for Lady Kelly was full of emotion and remarkably feminine.

The production produced a range of emotions from me, all very intense. If you haven’t started reading this author, try one of her books, particularly if you enjoy medieval historical romance with a dark edge.

Another winner for the Author and narrator

Ajax is the darkest Hero I have EVER read/ listen to. Still I rooted for him. How can he redeem himself from all he as done to human life. I can't say he as, but I still rooted for him. There lies the question......what is wrong with me.

What did you love best about The Dark Lord: Book 1 in 'The Titans' Series, Volume 1?

I loved how Ajax De Velt was redeemable. I liked how the author showed his character's arc in the story come full circle. But that he also still had to deal with his ambitions and some demons from his past sins.

It was very satisfying & loved the happily ever after. Complete closure to everything!

He was awesome! (I love this author Kathryn Le Veque's writing, and I have read all of her novels, but this was one of my not so favorites by her. Just because of the gruesome violence that was very realistically incorporated. It had to be terrifying to live back then. It reminded me very much of Vlad the Impaler.) But the narration made it less gruesome & terrifying in my mind, to hear the "bad guys" as human. Kiff did a spectacular job with his voice inflection & varying each of the men's voices to sound so different, but naturally. It makes me want to listen to all the audiobooks he's narrated because he did such an incredible job!

I just enjoyed the moments where despite Jax's rough & gruff bark, Kellington could tame the savage beast in him. He knew it, she knew it & he knew she knew it. But she wasn't manipulative with that power. So I liked their little interplay moments where he'd snap at her but she'd get him to do what she wanted anyway.

Even though I had already read the book a long time ago, I couldn't wait to listen to Kiff VandenHeuvel's narration of it! His performance really lured me in & couldn't wait for more!

I was surprised at the depth of character development and the amazing turn of events. I had a hard time in the beginning with the narration and initially found it irritating on the main character of 'Jax'. Once I muddled through this I became entranced. Great story!

I couldn't suspend my disbelief and that took all the interest out of it for me. At an hour and a half, I had wasted enough time trying to like it, so take this with a grain of salt.

I found the idea that such a battle hardened and cruel man would so easily acquiesce to this woman's requests immediately after meeting her. If he was truly as cruel as the story tries to tells us he is (and I have a problem with the story not showing me any of that cruelty), he'd have killed her after the first few her numerous outbursts.

Summary: This was Beauty and the Beast without the whimsical furniture and dishware encouraging the romance. Add in a spritz of brutality and you have a boring, disappointing fairy tale.

When I write a review I try to be careful not to give away anything. Let me tell you, this book was great. I hated when it ended. Come on Audible we need (not want) the next book in the series. I can't wait. If you are looking for a book with romance, action, and a great narrator then this is the book. Just get it.

Narrator: Kiff VandenHeuvel (first time reader for me)he's got one heck of a deep voice and does a pretty good job. When you don't have to think who is talking and that it flows nicely you know you have a good reader.
This is one great book, loved it. When a story keeps me captivated and can also makes me smile, cringe and cry you know you have a winner!