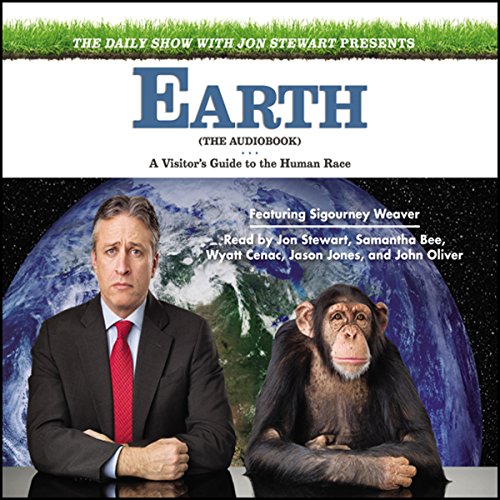 The Daily Show with Jon Stewart Presents Earth (The Audiobook)

Where do we come from? Who created us? Why are we here? These questions have puzzled us since the dawn of time, but when it became apparent to Jon Stewart and the writers of The Daily Show that the world was about to end, they embarked on a massive mission to write a book that summed up the human race: What we looked like; what we accomplished; our achievements in society, government, religion, science, and culture - all in a lavishly produced audiobook of approximately 200 minutes.

After two weeks of hard work and nights in the recording studio, they had their audiobook. Earth (The Audioook) is the definitive guide to our species. With their trademark wit, irreverence, and intelligence, Stewart and his team will posthumously answer all of life's most hard-hitting questions, completely unburdened by objectivity, journalistic integrity, or even accuracy.

Read by Jon Stewart, the Daily Show correspondents, and featuring a special performance by Sigourney Weaver.

Good book, not great. But let me explain.

The first thing you should know is that I gave this book four stars instead of five because it just didn't live up to how good the first Daily Show book [America: The Book] was. In fact, if you haven't listened to that one, do it first. It's funnier.

This book really is great. The "new" Daily Show cast never phones it in and every personality leaps into your ears. The book is whimsical, angry, funny, politically crazy, and everything else we look forward to from Jon Stewart and his gang. Listen to this one and America: The Book. you won't be too disappointed.

Like Earth, it warms the longer you stay with it.

The premise of the book is quite simple and Jon Stewart works it well. The target listener is an unknown alien race which stumbles upon the book (in some format) sometime after the demise of mankind. In our wake, this (audio) book is what we've left to guide them and a candid guide to who we were, how we lived, what we did and how we did it.

This one is a slow starter. I was a little harsh on this aspect at first, but the book gets much better after the first hour and it's enough to pull it up to five stars. The beginning is a bit out of the realm of where Jon Stewart does his best stuff and it sort of slogs along discussing geographical formations and nature in as humorous a way as you can do it. The good news is that it ultimately pulls out of its stall and makes the day.

Nice transition from print to audio. Once we get into the politico-social humor, Stewart shines. And this is classic Jon Stewart, which saves the day. His poignant, honest and sarcastic commentary had me laughing out loud during my jogs. It's on par with what you would expect from The Daily Show.

A nice, leisurely mind-candy listen that you can stop and start during your drives or runs and not miss a beat. Well worth a credit and on par with a David Sedaris or comparable work. Very entertaining and well worth the money.

A Treat for Daily Show Fans

Presented as an introductory guide to a vanished human race for the benefit of visiting aliens, "Earth" is a perceptive, tightly written, awfully clever survey of mankind's whole history. It's especially good at leaving unsaid the best punchlines, which immediately form in the listener's mind. With help from others, it is nonetheless mostly the voice of Jon Stewart who--freed from the rather more frantic persona of his TV show--is a skilled and expressive narrator. It's a joy to hear.

It's a good audiobook for a road trip where you are not really paying attention but there are a few laughs that are worth it.

With that said, I did enjoy listening to the book, although I did read the copy I bought for my wife. I do think the price is rather steep for less than 4 hours of content, but this is John Stewart, and I feel he was worth it.

This book is Jon Stewart at his best, almost. As a fan of the Daily Show I came to Earth with high expectations and found it a little flat. All the wit that makes the show great is in this book, but Earth made me realize just how necessary visual cues are to Stewart's comedic style. He's also great with banter which is difficult in book form. So three stars for a great comic team working in the wrong medium.

This was a great listen. The content was fresh and funny. They really mix it up with the narration and Jon Stewart is easy to listen to anyway.

Destined to be classic review of us!

A witty, hilarious book, that packs in tuns of informative science facts most folks probably don't know... I laughed out loud at some of John Stewart's unique spins and answers of our history... Highly recommended!!!

Earth by Jon Stuart is a lot of fun!!

Would you listen to The Daily Show with Jon Stewart Presents Earth (The Audiobook) again? Why?

The Audio has Stewart and some of his stuff from his show plus S. Weaver that read it. It's funny like his show and I think I will listen to it more than once. The only down side is I had to order a cheap book to look at the pictures from the book. Still listening is enjpyable and I laughed out loud a few tiimes while I worked on computer. It really was a fun look at the Earth.

What other book might you compare The Daily Show with Jon Stewart Presents Earth (The Audiobook) to and why?

I think if I had to compare it to another book I would have to go back to an old audio I have of the Hitchhikers to the Galaxy by Douglas Adams. And yes it has that weird kind of humor while still passing alone information. Douglas would of loved Steward.

Hitchhakers to the Galaxy or a Big Finnish production, Sorry I am a Sci Fi geek. But it's not science Fiction, It's a like his show.

The parts where he explained things to a aliens set to invade the Earth, I was amuzed

This is a non-threatening review of all the quirks and ironic constructs of human beings diluted with comedy. The book is a narrator (Jon Stewart himself), speaking from a recording, greeting aliens who arrive to find a long lost civilization -- our civilization. The narrator and various members of the Daily Show go into hilarious apologies of various human staples and institutions, which are explained to the aliens like quirky family stories to strangers, making one realize how silly they are from a 3rd person perspective. Great book to explore on a rainy day!

Having followed Jon Stewart's run on the Daily Show for quite a while, I was prepared for biting wit and casual hilarity. However, while the cast delivered their parts with the usual aplomb, most of the jokes fell flat for me. There seemed to be more cheap shots than truly witty observations about the human condition, which was a disappointment. Maybe I set my hopes too high.

Still, I did have some laugh-out-loud moments and after all: YMMV.