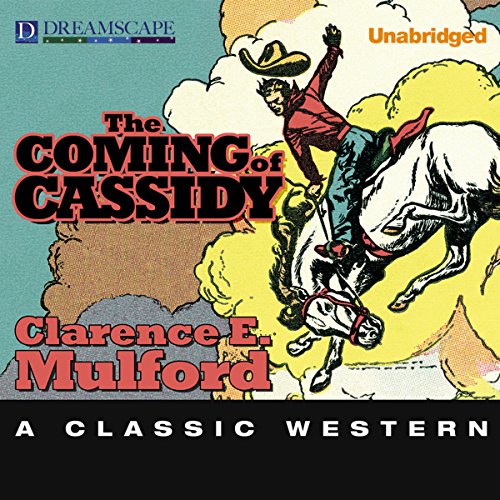 The Coming of Cassidy

Hopalong Cassidy is an iconic western cowboy hero conceived by Clarence Mulford, but immortalized in a series of films starring William Boyd from 1935-1948. A tough-talking and violent character in the print novels, Cassidy was remade into a clean-cut hero who traveled the West with his sidekicks fighting villains who took advantage of the weak.

Clarence E. Mulford takes you back to the beginning by relating the stories (as told to him by Red and the boys of the BAR-20) of how Buck Peters started the BAR-20 ranch. It tells of how he picked up Hopalong Cassidy, Red Connors, Skinny Thompson, and many of the other colorful characters in this famous series.

this is a great book. the narrator is perfect for this, don't miss it. wonderful

Go get a Louis L'amour

What disappointed you about The Coming of Cassidy?

If you listen to a lot of westerns, and I have a lot, then you will be disappointed by this book. Clarence Mulford's writing style is awkward. I believe that he tries to impress you with his vocabulary, but it does not fit with the genre. If he uses the word 'cogitate' one more time I thought I would turn the book off! Westerns are supposed to be simple with simple people. He uses the vocabulary of a college professor for man like Hopalong. It did not fit at all...I was really disappointed.

Has The Coming of Cassidy turned you off from other books in this genre?

Not from the genre because I love westerns. I will never get another book from Mulford though.

What about R. C. Bray’s performance did you like?

Bray's performance was solid for a western. The book was not his fault.

What character would you cut from The Coming of Cassidy?

Characters were not a problem, the story was not bad the writing was terrible.